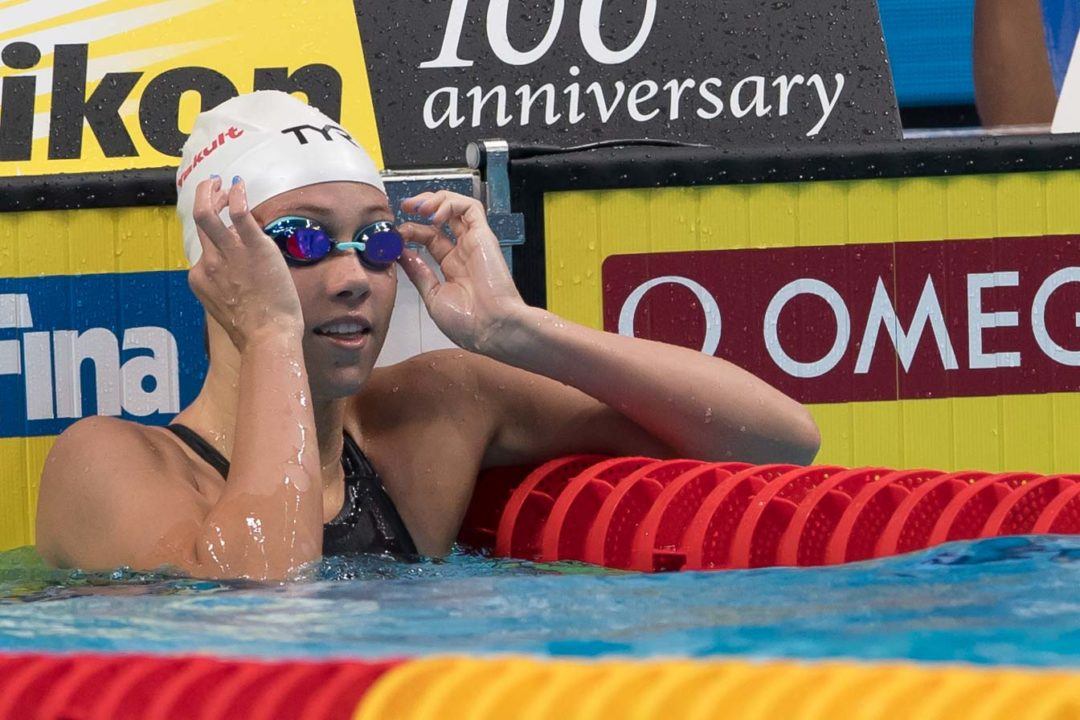 She and Michigan's Siobhan Haughey went head-to-head, flipping just a hundredth apart (22.93 to 22.94) at the 100. Comerford had the back half speed to get it done, though, touching in 47.00 to Haughey's 47.22. Archive photo via Mike Lewis/Ola Vista Photography

The 24th annual SMU Women’s Classic concluded tonight in Lewisville, Texas. Louisville’s Mallory Comerford continued her win streak on night 2, going up against Michigan All-American Rose Bi in the 500 free. They were far ahead of the field, with Bi going out in 1:50.61 to set the pace on the front half. Comerford trailed by nearly 2 seconds at the half, but rallied to move ahead in the back half of the race. She touched the wall with a winning time of 4:39.24 to Bi’s 4:40.37.

Later in the session, Comerford returned to take on the 100 free. She and Michigan’s Siobhan Haughey went head-to-head, flipping just a hundredth apart (22.93 to 22.94) at the 100. Comerford had the back half speed to get it done, though, touching in 47.00 to Haughey’s 47.22. That was a new best time for Haughey, whose previous best was a 47.39 from last season’s NCAA meet.

USC’s Riley Scott completed her sweep of the breaststroke races. After winning last night’s 100 breast handily, she was a full second ahead of the field in tonight’s 200 breast with her 2:08.20. Interestingly, teammate Maggie Aroesty was slightly faster, winning the B final in a personal best 2:08.01. Michigan’s Haughey was 2nd in the B final, breaking 2:10 for the first time with a 2:08.92.

she’s such a boss. beautiful swimmer.

Comerford throwing down some damn fast times… not to overshadow Siobhan Haughey, who’s been a few tenths back of Comerford a few times this weekend, also pretty quick too.

Good catch. I’ve added a note about Aroesty in there.

USC winning by half a point. Yeesh