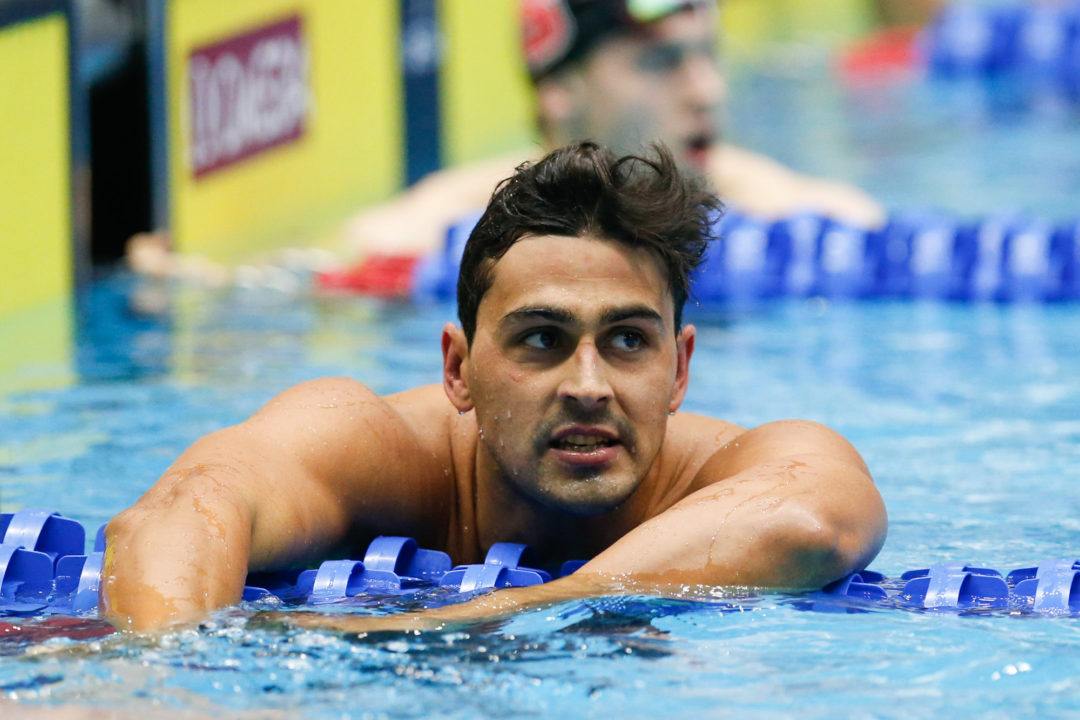 Dylan Carter had an explosive season in 2016-17 as he and Santo Condorelli returned to the NCAA after taking an Olympic redshirt in 2015-16. Carter earned All-American status in the 50, 100, and 200 freestyles. He was also a part of 3 All-American relays. Other individual All-Americans included Condorelli (100 free), Dashiell Enos (platform diving), Patrick Mulcare (200 back), Ralf Tribuntsov (100 back), and Carsten Vissering (100 breast).

Between Olympc sprinters Dylan Carter and Santo Condorelli, the Trojans should pick up big points in the sprints. Ralf Tribuntsov is close to being a contributor in 2 events here after scoring in the 100 free B final and finishing 19th in the 50 free at last season’s NCAAs.

They’ve also got freshmen Jake Sannem and Justin Nguyen coming in with 100 free best times in the 44-low to 44-mid range. As far as the 200 free goes, Sannem is looking like he could step up to play a role on the 800 free relay with his best time of 1:34.7, while Nguyen’s 1:36.6 makes him a potential player on that relay in the future.

With former All-American Reed Malone now out of the picture due to graduation, polish distance swimmer Pawel Furtek is the Trojans’ best shot at scoring in the distance races. Furtek placed 5th in the 1650 free and 11th in the 500 free at conference last season, but didn’t qualify for the NCAA meet. However, he has potential to be a scorer if he can get back to 2016 form, as he scored with a 10th place finish in the mile at the 2016 NCAA meet.

They’ve also got Pac-12 scoring potential with Walker Bell, who placed 15th in the 500 free at last season’s conference meet, and Jason O’Brien.

Patrick Mulcare is probably the team’s top IMer, though he’s more known for his backstroke talents. He was just outside of scoring range in the 200 IM last season, placing 17th in the event at NCAAs. He was also pretty close in the 400 IM with a 22nd place finish. Returning Pac-12 scorers Mark Jurek and Walker Bell should be able to do some damage at the conference level.

Although Santo Condorelli opted out of the 100 fly at NCAAs last season and did all 5 relays instead, he was an Olympic semi-finalist and holds the Canadian Record in the long course version of the event and has the potential to bring in some points. Condorelli and Alex Valente were both finalists in the 100 fly at 2017 Pac-12s, and Valente went on to swim the butterflies at NCAAs. Relay butterfliers Dylan Carter and Kyle Grissom are both returning for the Trojans. Carter could definitely be an individual scorer in the 100 fly, but it’s unlikely he’ll swim it since the 200 free falls on the same day.

Backstroke is one of the Trojans’ strengths, as All-Americans Patrick Mulcare and Ralf Tribuntsov are both returning. NCAA qualifier Jon Knox is also back this season. Among the newcomers is Romanian Junior World champion Robert Glinta, who joins their roster as a freshman.

Glinta, an Olympic backstroke finalist, should definitely be able to bring in some points. He’s been as fast as 53.3 and 1:57.9 in long course meters, which puts him right in league with the best backstrokers in his recruiting class (Michael Taylor, Austin Katz).

Though they don’t have a lot of depth in this area, Carsten Vissering should bring in plenty of points in the 100 breast. He was the Pac-12 100 breast champ last season and finished 3rd at NCAAs. They’ve graduated NCAA scorer Steven Stumph now, so it would be ideal for Vissering to work on his endurance to bring in some 200 breast points as well. Returning Pac-12 scorer Mario Koenigsperger could also help out here. He finished 9th at 2017 Pac-12s and is within half a second of NCAA scoring range.

The Trojans are in good shape since they didn’t lose too many of their NCAA scorers to graduation in 2017. Reed Malone was a member of 2 scoring relays, but their promising freshman talent should make up for the loss there. In addition to returning their top scoring swimmers, they’ve also got returning scoring divers Dashiell Enos (19 pts) and Henry Fusaro (8 pts).

The Trojans have a few weak spots, and Pawel Furtek will need to return to top form to help them avoid a points deficit in the distance races. They have very strong sprint free and backstroke groups, and the outlook for their relays is great. With potential to score at NCAAs in every area, they could be battling for a spot in the top 5 this season.

Glinta is going to be huge, no way he doesn’t go at least a 45

What is up with Santo and the clown face?

Modeling on the side. ?