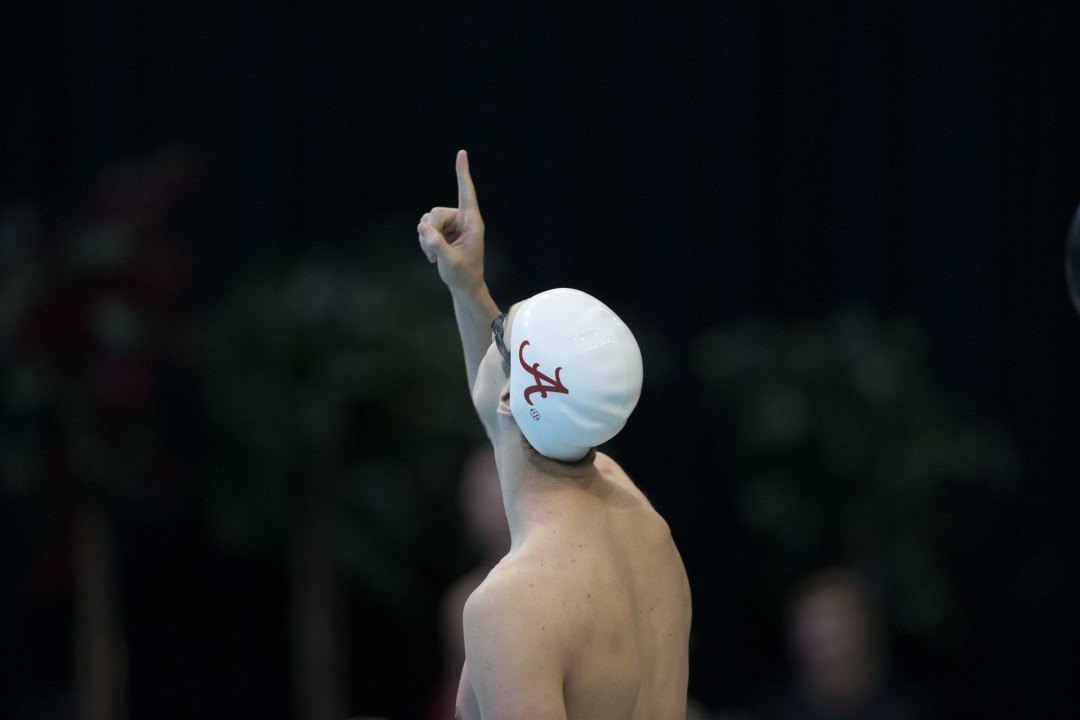 Coming off the program’s first top-10 NCAA finish since 1994, the (crimson) tide is rising for the University of Alabama swimming & diving program.

Tide might not be an appropriate representation of the speed with which this team’s stock has risen: crimson ‘eruption’ is more fitting. In 2013, ‘Bama was 28th overall at NCAAs. In 2014, that ranking improved to #12, and this past spring, the Crimson Tide finally cracked the top 10 with a 10th-place finish in Iowa City, Iowa.

Much of that improvement has come from Greek import Kristian Gkolomeev, who has won NCAA titles in both of his seasons in Tuscaloosa. Gkolomeev tied for the 50 free title as a freshman, and stepped up a notch in distance to win the 100 free this past season.

Gkolomeev is individually scoring more points right now than the entire ‘Bama teams of the early 2010s scored – in fact, he was among the best in the NCAA with 37 individual points last year despite swimming just two individual events.

The long-limbed sprinter was second in the 50 free, and also powered three Alabama relays into the top 8, with his fourth relay also scoring points.

But he wasn’t the only bright spot for Alabama last season. Fellow sophomore Connor Oslin continues to fly under the radar despite one of the finest seasons in the country. Oslin improved more than a full second in his 100 back and nearly two in the 200, putting up a pair of All-America finishes.

Icelander Anton McKee struggled with some injuries in his sophomore year, but still managed to make the NCAA’s top 8 in the 200 breast, and contributed two big splits on ‘Bama’s top-3-ranked medley relays.

Though they came up just short of conference and in-state rival Auburn in the final tally, it was the finest swim season Alabama has seen in over two decades – and there’s reason to believe it’s only the beginning.

The Gang’s All Here

Graduation is the stinger that clears out so many college rosters each year, but Alabama will barely feel it in 2016. That’s because the Crimson Tide is the only top-10 team to not graduate even a single one of its NCAA points from last season.

That means all 186 points return for Alabama, including all 20 of the team’s NCAA relay legs. Beyond that, Alabama will hardly even lose points at the conference level – their lone point-scoring senior last year at SECs was Ian Decker, who scored one point in the 200 IM.

The strength of this team is in its rising junior class, which includes Gkolomeev, Oslin and McKee. And Alabama is using that youth to really grow into its SEC rivalry with bitter foe Auburn. That’s one of the great, transcendent rivalries in all of college sports, though it’s lain dormant in the world of swimming for quite some time, with Auburn competing for national titles and Alabama blending in to the middle of the pack.

But a renewed Alabama-Auburn rivalry is a great thing for swimming. Already, the sparks are flying, with Gkolomeev chasing SEC and NCAA records held by Auburn legend Cesar Cielo, both teams stockpiling great young sprinters in an arms race for SEC prowess, and the rivalry finishing 9th and 10th at last year’s NCAAs.

One more wrinkle: the only other top 10 team from last year to not graduate a single swimming point from their NCAA meet? Those Auburn Tigers (though they did graduate 27 points from diver Fraser McKean).

Alabama’s incoming freshman class is a fascinating development in that rivalry. All four of the team’s incoming swimming recruits are identified on the team roster as primarily sprint freestylers.

Knox Auerbach out of Georgia is a big-time sprint recruit. (Tim Binning)

And there’s some legitimate talent there. Dynamo (GA)’s Knox Auerbach is one of the better freestyling prospects in the country, coming in with an SEC scoring time in the 100 free (44.26) and the range to go 1:36.8 in the 200 and 20.5 in the 50. That makes him a potentially huge relay piece moving forward, especially if he develops early in his college career.

In yet one more little rivalry dig, ‘Bama plucked Robert Howard from right under their SEC foe’s nose, signing the 20.5/45.0/1:39.1 Auburn Aquatics swimmer to a career in Tuscaloosa. The team also went out to former Auburn head coach David Marsh‘s SwimMAC Carolina club to nab Evan Heldman, who adds another 46/1:39 freestyler with some developmental IM prowess to the stable.

Maybe the most intriguing prospect, though, is 6-foot-5-inch Canadian Christian Arseneau, who seems to fit the Gkolomeev recruiting mold: a lanky, foreign athlete with great long course meters speed and the potential for a major college breakout. Arseneau has been 52.26 in the long course 100 free and 1:52.72 in the long course 200 (those times roughly convert to 45.6 and 1:38.6), so he’s got plenty of work to do to reach Gkolomeev’s level, but has the size of a high-upside prospect.

Add that freshman infusion to a team that already includes All-Americans Brett Walsh (19.50/43.15), Alex Gray (19.69/43.34) and Luke Kaliszak (19.74/43.88 as a freshman), and you’ve got a killer sprint group forming as the core of this team. Come to think of it, isn’t that how a certain other SEC program built its NCAA dynasty through most of the 2000s? (See, isn’t swimming more fun when both Auburn and Alabama are good?)

There’s maybe no one in the NCAA who’s had as steep an improvement curve as Connor Oslin. When Oslin first went to Alabama from the Marietta Marlins and Harrison High School of Georgia, his best times were 48.9 in the 100 back and 1:51.5 in the 200 back.

Connor Oslin’s improvement curve has been out-of-this-world in two seasons with Alabama.

Two years later, Oslin is one of the best backstrokers in the NCAA, coming off a sophomore season that saw him go 45.08 in the 100 (fourth overall in the nation behind national record-breakers Ryan Murphy and David Nolan, plus USC standout Ralf Tribuntsov) and 1:40.77 in the 200.

Take a second look at those numbers. Those are drops of 3.9 seconds in the 100 and a whopping ten-point-eight seconds in the 200 over a span of about two years. Breakout stories like that are what makes sports great, and though Oslin would have to overcome NCAA Swimmer of the Year Murphy for a national title in either, his story can already compete with the best of them.

A healthy McKee is Key

One of the team’s brightest young swimmers as a freshman, Anton McKee never quite looked the same in his sophomore season. The hybrid breaststroker/mid-distance freestyler (how’s that for an event combo?) broke his collarbone in the offseason, a particularly difficult injury to recuperate from, given how much it immobilizes one from nearly any type of training.

He did show some progress in the 500 free (a lifetime-best 4:14.98 at NCAAs), but a 17th-place finish once again left him outside of the all-important scoring heats.

If McKee can find a way to move forward again in the breaststrokes, he’s a huge point-scoring threat for Alabama. The rising junior is the second returning swimmer in the 200 breast, behind only NCAA champ Will Licon of Texas. In addition,with 7 of the top 8 swimmers graduating out of the NCAA’s 100 breaststroke final, McKee could be a legitimate national title contender if he can lower that 51.7.

Though that confluence of elite young talent makes the future seem awfully rosy for Alabama, the most glaring concern is that the team’s depth still leaves plenty to be desired.

That 10th-place team at NCAAs was made up of just 6 point-scorers, and essentially just three (Gkolomeev, Oslin and McKee) in really pivotal roles. That’s less a swimming roster and more a basketball team. Where most of the top 10 programs are small armies, like the Avengers fighting Ultron Alabama is more like the Mighty Morphin’ Power Rangers, if you include the Green Ranger (which, of course you would because Tommy’s awesome.)

That lack of depth will make it tough for the Crimson Tide to rise in the SEC, where they were just 5th last year. It also means a single missed taper, disqualification or mid-season injury can put a huge damper on the team’s overall placement hopes.

The incoming freshman class seems designed to beef up that depth in the sprint freestyles, which is where it’s most important with the premium placed on relay points in college swimming. That has to be the next major step for Alabama to continue their rise, and not face a huge setback when the Gkolomeev/Oslin/McKee class graduates in 2017.

It’s never a bad thing to finish in the NCAA’s top 10 without graduating a single point. Alabama should reap the rewards of that youth movement this year, with a foray further into the top 10 not out of the question.

The next step for Kristian Gkolomeev is pairing 50 and 100 free NCAA titles together in the same year. SEC rival Caeleb Dressel (Florida) should push him in both, but Gkolomeev has the potential to put up 40 individual points nationally.

Kristian Gkolomeev has won the 50 free and 100 free in consecutive years at NCAAs. Can he win both in 2016? (Tim Binning)

Oslin and McKee are primed to do some damage in the back and breast, respectively, and if that deep sprint corps pays off, ‘Bama could be fielding some pretty nasty freestyle relays.

Moving up the ranks at NCAAs is never easy, but Alabama has some teams ahead of them who will be ripe for the picking. #9 Auburn and #8 NC State could both be better this season – Auburn because they didn’t graduate any swimming points and NC State if they can keep from jumping off the blocks early with 40 relay points in their pockets.

But #7 Georgia, only 32.5 points ahead of Alabama last year, loses star IMer Chase Kalisz to an Olympic redshirt year, and #6 Stanford graduates American record-holder David Nolan. 30 points is a lot at the national level, but a reloaded and rising Alabama roster has clear potential to move up in the NCAA’s second major tier.

🙂 🙂 🙂 One of my favorite articles ever on SwimSwam, mainly because it was such a thorough investigation of a team that often gets underestimated. Roll Tide!

🙂 🙂 🙂 One of my favorite articles ever on SwimSwam, mainly because it was such a thorough investigation of a team that often gets overlooked and underestimated. Way to go, Jared! I’m very excited about the year to come for ‘Bama. This team has an exciting future ahead of them. As always, Roll Tide!

Thanks, Roll Tide! This series of stories is one of my favorites as well!

agreed, an Alabama-Auburn rivalry is only good for the sport!