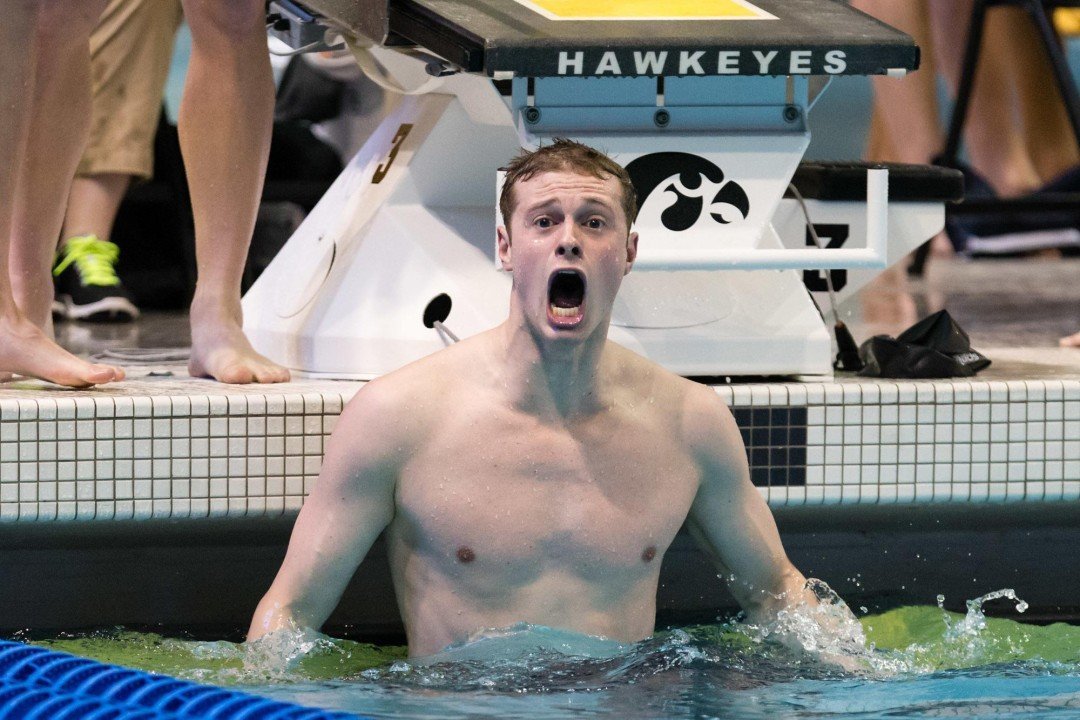 Jack Conger was clutch last season for Texas, and will be once again. Current photo via Tim Binning/TheSwimPictures.com

Jenny Nusbaum led the way for the Jayhawks with a pair of wins. Nusbaum and teammate Claire Campbell put together a 1-2 finish in both distance races.

The Texas Longhorns had a dominant 2014-15, plain and simple. They continued their dominant legacy at the Big-12 Championships, capturing their 19th straight title, and then put on a clinic at the NCAA Championships, defeating defending champion Cal by well over 100 points to win their first NCAA title since 2010.

They were led by sophomores Will Licon and Jack Conger, and freshman Joseph Schooling. Licon put up the most individual points of anyone at the meet with two first place finishes (200 breast, 400 IM) and a second place finish in the 200 IM. He contributed 57 of a possible 60 points. Conger and Schooling dominated the butterfly events, with Schooling claiming both titles and Conger runner-up in both. Schooling was also 9th in the 200 IM and Conger was 7th in the 100 back. Schooling and Conger each swam on 3 relays as well.

Another swimmer who had a breakout meet was sophomore Clark Smith, who went from not qualifying for the meet in his freshman year to winning the 500 freestyle last season. He also placed top-16 in the 200 free (11th), and initially finished 5th in the 200 fly final before being disqualified.

The first night of competition was massive for Texas, as two improbable relay victories came through. First off, the 200 free relay where Texas was expected to be quick, but certainly not favored to win. After initially getting disqualified in the prelims for a false start only to have it overturned, NC State appeared to win the race with Texas in second. After all of the information came in, NC State’s anchor swimmer jumped early by 0.01, disqualifying them and giving Texas the first relay victory of the meet. At the end of the session the 400 medley relay went off, with Cal and Texas expected to dual for the win. Cal got out way ahead early in the race thanks to a blistering leadoff leg from Ryan Murphy, but with Schooling and Conger dropping insane splits on fly (43.7) and freestyle (40.9) Texas was able to overcome the deficit and win their second relay of the night in a new NCAA record. These two victories really showed the other teams, especially Cal, that this was the Longhorns year and nothing was going to stop them.

The 100 butterfly was an exclamation point on Texas’ performance, placing 6 swimmers in the 8 person final. Led by Schooling and Conger, Tripp Cooper, Will Glass, Matt Ellis and John Murray also made the top-8.

Conger and Schooling Will Continue To Push Each Other

Joseph Schooling and Jack Conger have had a rivalry brewing ever since Schooling arrived in Austin for his freshman year. Both ultra competitive, they pushed each other to incredible heights last season, and will continue to do so this season. It was evident early in the year last year they both hated losing, as was seen in the Eddie Reese Invite video, as Conger was swimming backstroke and Schooling fly, but Conger hopped up and challenged Schooling to a 50 fly. They tied at a blistering 20.98, had a swim-off, and Conger topped Schooling 20.80 to 20.82. This rivalry would continue throughout the year. 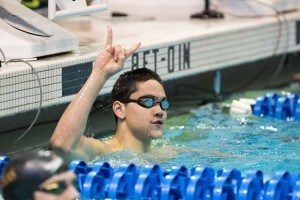 Joseph Schooling will look to repeat as the 100 and 200 fly national champion (courtesy of Tim Binning, theswimpictures.com)

Conger set the American record in the 200 yard fly, but it was Schooling who came out on top at NCAAs, winning both fly events over Conger. The rivalry continued into long course season when Schooling won bronze at the World Championships this summer in the 100 fly (50.96), faster than what Conger did at US Nationals (51.33). They recently had a rematch at the Eddie Reese Invite in the 50 fly, with Conger winning again, 20.71 to 20.86. They will continue to push each other to new heights this year, and will lead Texas’ unbelievable butterfly squad to another dominant year. Look for both to go 1-2 at NCAAs in both fly events once again.

Licon, Smith Won’t Fly Under The Radar This Season

After monster NCAA performances from sophomores Will Licon and Clark Smith, both will be marked men heading into this years championship season. Both flying under the radar after having freshman years with varied success, they broke through in a big way in March. Licon won the 200 breast and 400 IM, defeating defending champions and American record holders Kevin Cordes and Chase Kalisz in the process. He also finished 2nd in the 200 IM behind David Nolan’s American record, with one of the fastest swims in history. Smith on the other hand broke through on the first night and won the 500 free against some big names, a massive improvement after failing to qualify for the meet his first year. He also finished 11th in the 200 free. Both were able to come into the meet last season with all of the pressure on the other swimmers, but this season they will have a target on their back after what they did last year. It will be interesting to see how they respond. Nonetheless, both are major threats to repeat as NCAA champions in 2016.

After such a dominant NCAA performance, Texas looks primed to lead from the front for years to come after putting together the #1 ranked recruiting class. They are led by freestyler Townley Haas, the #2 recruit in the class. Haas has incredible freestyle range from the 50 to the 1650, and has already been a blistering 1:34.8 in the 200 this season. He will be in the hunt for a top finish in both the 200 and the 500 at NCAAs this year, and will be key on the 800 free relay that was lacking last season compared to other relays. 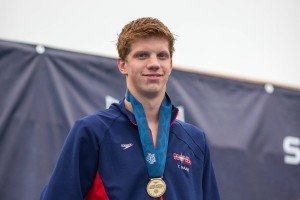 Next up is Ryan Harty, a backstroker/IMer who was ranked 9th but if they were re-ranked he might make his way all the way into the top-3. Harty has improved his backstroke times all the way down to 46.3/1:40.9, and has already been 46.4 and 1:42.8 this season. He also has IM personal bests of 1:44.4/3:44.8, and has been 1:44.7 in the 200 already. Sprint freestyler Tate Jackson is the third longhorn ranked in the top 20 at #20. His best times of 19.9 and 43.6 are competitive and he has already been 20.0 flat start and 19.4 on a relay this season. John Shebat comes in with fast backstroke best times along with sprint freestyle ability. Like the other freshmen, Shebat has come in and been fast right from the get-go. At the Texas Orange and White Meet Shebat was disqualified in the 100 back, but did go 46.6, faster than his best time. He also went under his PB in the 100 free, going 44.7. He’ll be a competitive backstroker for the Longhorns this year and a useful sprint freestyler if they need him. Jeff Newkirk wraps up Texas’ top recruits, and is the third Texas freshman along with Haas and Shebat from Virginia. Newkirk is a solid mid-distance freestyler, and has come close to his 200 best time already this year. Texas adds more fuel to the fire this season with their recruits and all will be dangerous in their first season.

It’s already been mentioned, but the Longhorn relays deserve their own section because they were just so strong. Winning both the 200 free and 400 medley relays on day 1 was a huge confidence boost to the team. Their relays remained solid after that, but they couldn’t top the day 1 performance. They were 3rd in the 200 medley, 8th in the 800 free and 4th in the 400 free. Conger and Schooling were key members obviously, along with senior Kip Darmody who swam on 4 relays including backstroke on the medley relays. Incoming rookies Ryan Harty and John Shebat will battle to earn that relay spot this year. John Murray was also very reliable, filling in where he was needed. He swam the 200 free relay, along with the breaststroke leg on the 200 medley and the prelim relay of the 400 free. The 800 free relay was the weakest, and that has received a big boost with Townley Haas. The competition will be stiff, but they’ll certainly challenge for top finishes in all relays and will probably win a few.

Unlike some of the top NCAA mens teams, the Longhorns gain some solid points from their diving squad. Cory Bowersox, Mark Anderson and Will Chandler all produced top finishes at NCAAs last year. Bowersox was 6th in the 1-meter, Anderson was 6th on platform and 9th on 1-meter, and Chandler was 5th on 3-meter. With two top-10 finishes Anderson led the way with 23 points. In total they produced 50 points. They have lost Chandler this season, but gain Sean O’Brien. At the Orange-White intersquad meet earlier this season O’Brien dove well, including beating Anderson (who was 9th at NCAAs) in the 1-meter event.

The outlook for the Texas Longhorns this season is good. Like really good. When you return as defending national champions (by a wide margin) and boast the #1 recruiting class in the nation, anything less than a repeat title would be a colossal disappointment. And there is no reason to believe they won’t repeat. Texas is loaded, top to bottom, led by superstars Jack Conger and Joe Schooling who continue to push each other to the next level. All of their relays were pretty amazing last year save the 800 free relay, and now with freestyle ace Townley Haas in the mix they look like they’re set for years to come. Texas is coming, and the other schools know it. Their talent, depth, and coaching is unparalleled in the NCAA right now.

The appeal the NCAAs has this year is a lot of young stars from many programs doing some insane times.

But so far as the team race is concerned, it is a meet for second place. Texas is way out ahead of all others this year.

they aren’t even good

This is the year of jack Conger. He will win 2 individual NCAA titles and then declare, as junior, for NSL draft.