College Invite Roundup: Quick hits around the NCAA for the weekend of Nov. 20-23 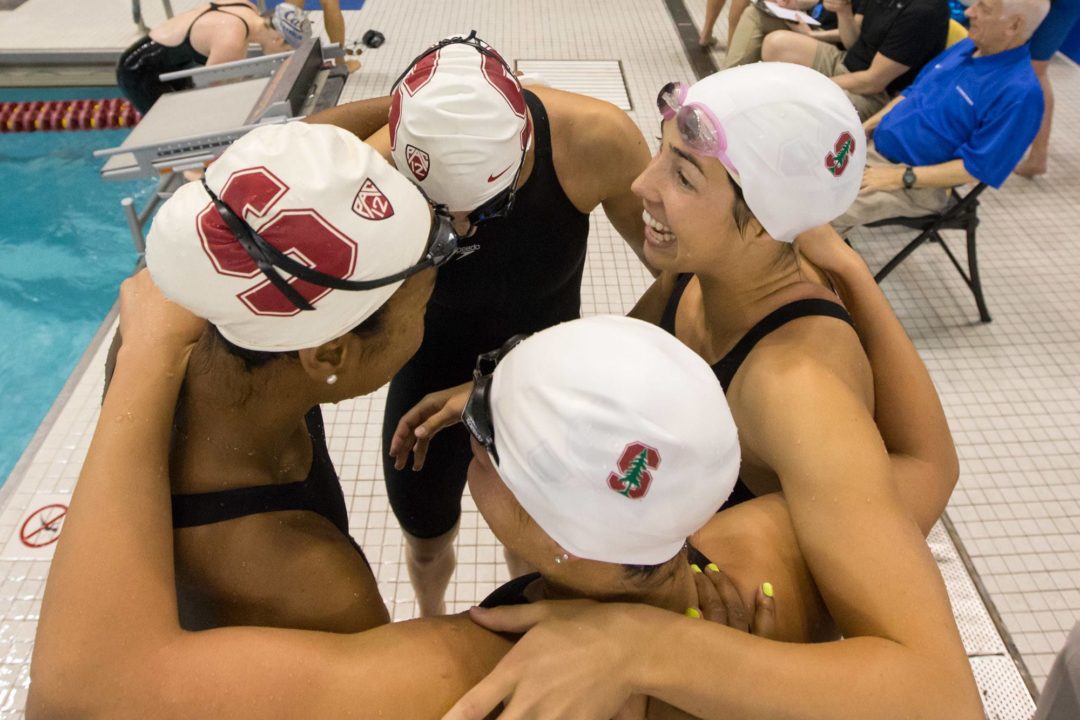 SwimSwam's got you covered, college swimming fans, with this list of rapid-fire breakdowns from each of the major college invites to happen last week. Archive photo via Tim Binning/TheSwimPictures.com

This past weekend saw the first flood of NCAA mid-season rest invites. With exciting action going on in every corner of the country, even the most dedicated of swimming fans certainly missed a meet or two along the way. Well, SwimSwam’s got you covered, college swimming fans, with this list of rapid-fire breakdowns from each of the major college invites to happen last week.

We’ve included links to live results and meet recaps when possible, plus pulled out any swimmers who hit NCAA Division I “A” cuts – the times that automatically qualify an athlete to swim at the national championships.  13 swimmers have already hit at least 1 “A” cut, 8 women and 5 men.

Simone Manuel broke the laws of physics with a 45.8 freestyle split on the 400 medley and Stanford’s relays – all 5 of them – look like NCAA contenders, if not favorites. Still, the Cardinal lost the team title to Texas A&M, which got a beastly 4:04.92 400 IM from Sarah Henry. On the men’s side, Dave Nolan was fast for the winning Stanford men, including a 1:43.24 in the 200 IM.

Tennessee’s women took home the title, led by a big 200 breast win from Molly Hannis and some solid sprinting from Faith Johnson. On the men’s side, NC State rode its stable of powerhouse sprinters to the title, though the host Tar Heels put up a great fight. Evan Pinion had the swim of the meet, going 14:42.04 to win the mile in the fastest time in the nation so far.

Roughly the entire state of Florida headed north to participate in the Georgia Tech invite, with the Florida Gators easily topping all comers. Jess Thielmann won the 500, 1650 and 400 IM for Florida, hitting an NCAA “A” cut in the mile. The men’s meet featured a trio of great races between Georgia Tech’s Andrew Kosic and Florida’s Caeleb Dressel, with Dressel winning the 50 free (19.31) and 100 fly (46.60) but Kosic taking the 100 free (42.74).

Focusing only on the college action at this pro-dominated meet, the Big Ten conference saw some great times out of the host Minnesota Gophers and the Purdue Boilermakers. Kierra Smith came up big for the Gopher women, cracking a minute in the 100 breast and hitting an A cut in the 200 breast in 2:05.12, only about a second off the U.S. Open record. Purdue’s male breaststrokers were also great, with Marat Amaltdinov going 1:54.46 to beat a handful of Olympians in the 200 breast.

Kentucky senior Tina Bechtel stole the show in Ohio State, hitting A cuts in both butterfly events during blowout wins; she now sits first in the nation in both races (51.11 and 1:52.36). It was the Purdue women who took the meet, though, with freshman Abby Jagdfeld coming up with a pair of big freestyle wins. On the men’s side, Ohio State ran away with things, led by a pair of wins from Tamas Gercsak, though the swim of the meet might have been Wisconsin backstroker Drew teDuits, who went 1:41.96 in the 200 back.

Alabama had the flashiest swims – including a screaming 19.11 from Kristian Gkolomeev in the 50 – but Virginia Tech had the depth to win both team titles. The H2Okies broke multiple pool records courtesy of Collin Higgins (200 back, 1:42.69), Morgan Latimer (200 fly, 1:44.30) and Klaudia Nazieblo (200 fly, 1:55.90, pool and school record) en route to their titles. Alabama’s Kaylin Burchell had one of the meet’s breakout swims, going 59.67 to break the pool record in the 100 breast and rise towards the top of the NCAA.

Louisville took care of business at their home invite, breaking multiple pool records en route to wins in both genders. Kelsi Worrell was smashing in the sprints while Tanja Kylliainen rolled to a stealthy (like a ninja!) 400 IM win in one of the nation’s top times. Freshman Carlos Claverie was impressive in the 200 breast for the Cardinal men, and Pedro Coutinho‘s 100 fly was another high point. Missouri State also got a couple of nice swims from senior Paul Le.

George Mason ran away with the points at their home invite, getting three huge wins from Emily Escobedo on the women’s side. For the men, Travis Lauri came up with a big triple. UNC-Wilmington’s Valtteri Halonen was also a standout, though, sweeping the backstrokes by wide margins.

Hosts Indiana University-Purdue University Indianapolis broke 8 school records, taking the women’s meet and falling just short on the men’s side to the University of Indianapolis. Jenny Oleksiak and Lexi Laird each won twice for the IUPUI Jaguar women; Oleksiak won the 200 IM and 100 breast while Laird swept the backstrokes. On the men’s side, Justin Rosillo led Indianapolis to the win by sweeping the 50 and 100 frees.

The Pitt Panthers swept their home invite by large margins on both sides. Freshman Amanda Richey was everywhere for the Lady Panthers, winning five individual events (500 free, 400 IM, 200 free, 1650 free and 200 back), most of them by large amounts. Sophomore Zack Lierley won both IMs for the Pitt men, but the biggest individual winner was West Chester’s Victor Polyakov, who took the 200, 500 and 1650 frees.

Michigan State won the men’s meet, getting four wins from Alec Kandt, who swept the 50, 100 and 200 breaststrokes and also won the 200 IM. The home Northwestern squad was led by Jordan Wilimovsky, who probably had the best night of all, though, winning the 500 free, 400 IM and 1650 free, plus jumping into the top 5 in the nation in the mile. Lacey Locke won three times to lead the Northwestern women to the win – Locke swept the 50, 100 and 200 backs.

Chelsie Miller won three times to help the Kansas Jayhawks win their home invitational. Miller took the 500 free, 400 IM and 200 fly for Kansas, which won 12 of the 18 events. Iowa State took second with Amanda Paulson taking the 50 free and 100 fly.

Northeastern University won the women’s-only invite at Rutgers over the weekend, led by some big-swimming freshmen. Sara Touchette-McGowan (50 free) and Samira Hoesl (100 breast) were rookie winners while senior Megan Foran (200 free) provided veteran leadership with a win of her own. New Hampshire’s Katie Mann was unstoppable, stealing titles in the 200 breast, 200 IM and 400 IM.

Caroline and Nicholas Arakelian helped lead Queens to double victories at the Wingate Fall Frenzy. Carolina Arakelian won three times on the women’s side, taking the 500 free, the 400 IM and the 200 back, all in blowout wins. Also winning big on the women’s side was Hannah Peiffer, who took the 200 IM, 100 fly and 100 back. Nicholas Arakelian won the 500 free and 400 IM, joining with Matt Josa (200 IM, 200 back winner) to help the Queens men triumph.

Casey Clark was everywhere for Rice, leading the Owls to the win at Houston’s women’s-only Pearland Invitational. Clark won the 100 fly, 200 fly, 200 IM, 100 free and 200 free, plus would have won the 100 back, had she made the A final (Clark’s winning time in the consols was the fastest of the meet). Also swimming well was Tulane’s Mia Schachter, who won the 50 free and 100 breast to help her team take second overall.

Thanks, MU Tiger – none of the Missouri relay times are appearing on USA Swimming’s Event Rank database, even though their individual swims from the weekend are in the database. We’ll dig around and figure out why, but for now, the Mizzou relays have been added to our tally

It looks like Mizzou swimmers had a heck of a meet. Some very fast times by both the ladies and guys.

Lars Jorgensen is doing a great job at Kentucky. Tina Bechtel is only a tenth or two off of last year’s NCAA winning times in the 100 and 200 fly, and they dropped a solid 4 seconds from the school record to get that A cut in the 800 free relay. He’s off and running now.