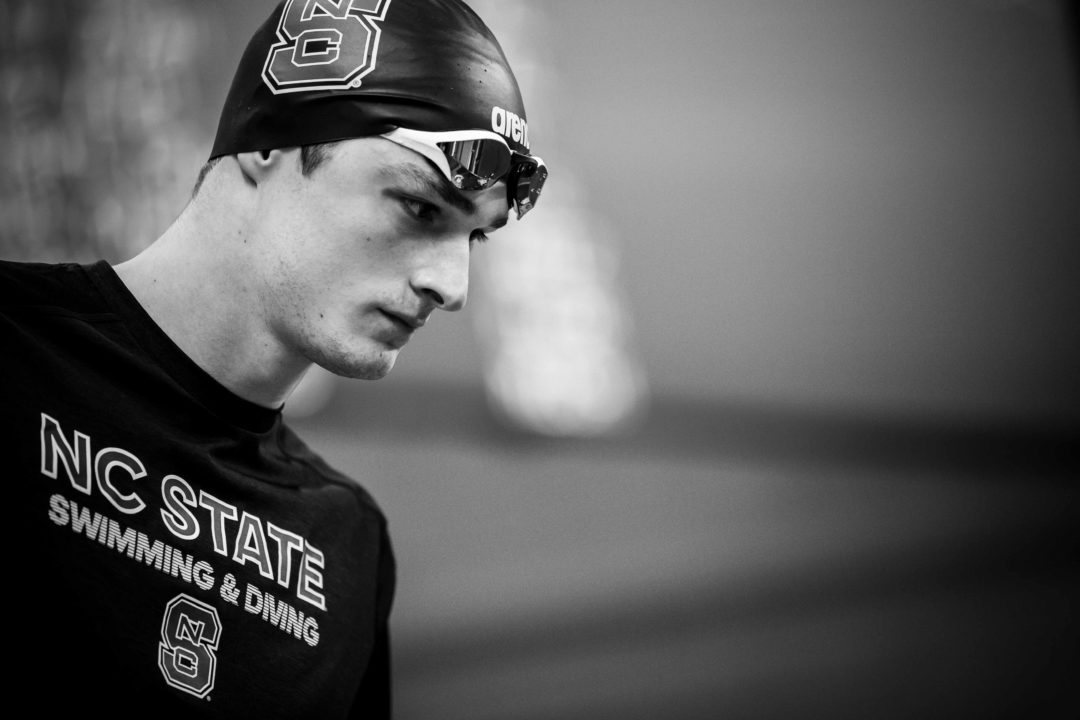 Kate Douglass wasn't the only swimmer with an impressive swim in a practice suit, as Stewart threw down a 45.65 to break a pool record. Current photo via Jack Spitser/Spitser Photography

Freshman Ross Dant swept the distance free events. He flirted with the 9 minute barrier in the 1000 free, ultimately touching in 9:00.86. Then led a Wolfpack sweep of the top three finishers in the 500 free with a 4:23.60.

Another freshman, Hunter Tapp, won the 200 free in 1:37.30, leading a field that all finished within one second of each other. Tapp later finished in the 100 free with 44.56. Senior Noah Hensley got in on the wins with a 47.31 in the 100 fly. Tapp and Henlsey joined Stewart and Korstanje on the Wolfpack’s winning 400 free relay, both splitting 43s. NC State is in a bit of a rebuilding mode this year when it comes to its free relays, but Tapp and Hensley have consistently been on this relay thus far this season. Zach Brown added a win with a 1:45.60 in the 200 fly.

Just as on the women’s side, Virginia had a few swimmers throw on tech suits. Most, if not all, of those suited swims didn’t count in the score, including freshman Josh Fong‘s 1:44.73 in the 200 fly.

CHARLOTTESVILLE, Va. –The No. 7/3 NC State men’s and women’s swimming and diving teams set three pool records on Friday at the ACC showdown in the University of Virginia Aquatic Center as the Wolfpack men captured their sixth consecutive dual meet win over the Cavaliers, 169-131.

Nyls Korstanje and Stewart led the Pack in scoring for the men, and on the women’s side Alons posted the most points for the squad. Korstanje, Stewart and Alons, along with teammate Ross Dant, each recorded multiple individual event titles on the day.

MEET HIGHLIGHTS:
In the women’s 100-yard backstroke, Katharine Berkoff (52.37) and Muzzy (53.26) posted a pair of NCAA B cuts on their way to a one-two finish. For the second consecutive weekend Berkoff swept the backstroke events thanks to a 1:53.43 finish in the 200-yard backstroke.

Virginia had four individuals record a win in the men’s meet against the Wolfpack. Junior Keefer Barnum (Louisville, Ky.) led the 100-yard breaststroke with a time of 53.66. Junior Matthew Otto (Newark, Del.) finished with a time of 1:57.92 in the 200-yard breaststroke to top the event, while sophomore Casey Storch (Great Falls, Va.) captured a time of 1:47.99 for the top time in the 200-yard individual medley. Senior Bryce Shelton (Vienna, Va.) won the 1m board with a score of 322.73.

“This was a great team performance this afternoon,” head coach Todd DeSorbo said. “We talk continuously about everybody on the team stepping up, everybody on the team knowing their role and everybody on the team being focused and committed to that role, and tonight both the men and women really came out and showed that. I was definitely pleased with how the team executed all the races, how they battled hard all the way to the finish in every race and the energy the team had throughout the competition. It’s a great rivalry with NC State, having coached there for a while and knowing their coaches very well. They’re a great team and are very well coached. They definitely bring out the best in us and I hope that we bring out the best in their program.

“Our women got the meet started off fast with a 200 medley relay that would win most meets around the country, no matter what time of year, and Paige Madden with a triple that’s very challenging, winning the 1000, 200 and 500 freestyle. She’s so disciplined, so controlled and just swam great races tonight. Alexis Wenger had a little bit of a breakout in her 100 breaststroke, beating the reigning ACC champion tonight, and is starting to make a name for herself. Kate Douglass did what she does best, dominating with a win in the 50 freestyle and 200 breaststroke and was an integral part of both relay wins, especially the last freestyle relay where she came from almost two seconds behind to seal the win. We also had some great performances from a lot of other people, Maddie Donohoe, Ella Nelson, Morgan Hill, Caroline Kulp, Carter Bristow and Abby Richter to name a few. The men fought hard, as it’s the best showing we’ve had against NC State in quite some time, proving that they are a significantly improved team and will most definitely be a force to be reckoned with in the very near future. We had some exceptional performances by Keefer Barnum, Ted Schubert, August Lamb, Justin Grender and our breaststrokers and IM’ers flexing at the end of the competition to go 1-2-3. I am excited about the direction our men are headed and looking forward to another tough day of competition tomorrow here at home with UNC. We are going to have to do a great job of recovering tonight and coming back with the same emotion we had today.”

He’s gonna be ridiculous at NCAAs. Has a chance to break Murphy’s record.

For a year then its deans

The guy’s improvement curve has been insane, imagine if he was able to translate his short course success to the big pool! As if the 100 back can’t get any more competitive.

53.8 in the back at World University Games I believe. 52 is not out of reach In my opinion.

53 low at best. Doesn’t have the stroke to compete at the very top.