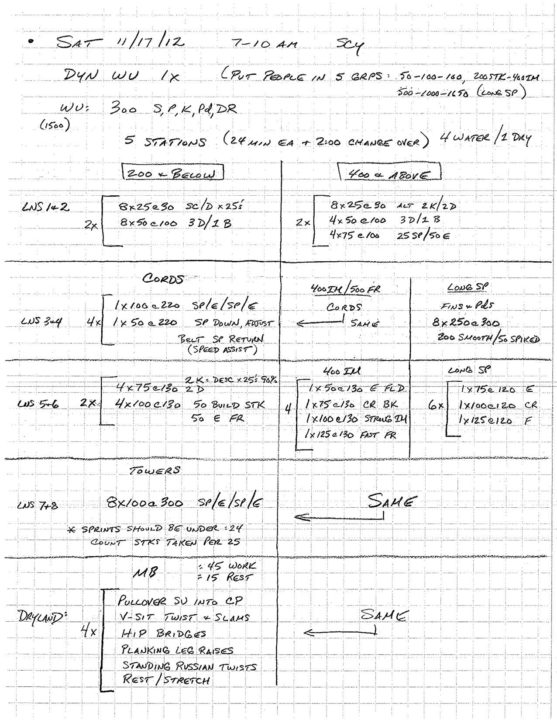 Eagle Swim Team Head Coach Scott Ward shares some insight into his training approach at EST. If you would like to share a workout with the swimming community email [email protected]

Wonder when each of the top 8 US women’s 100 breaststrokers broke 1:00 in the SCY pool? Find out in this installment of Roadmaps!

The workout you see above was a Stations practice we did on Saturday Nov 17 for our top senior group on Eagle Swim Team. The group has 20 swimmers ranging in ability from OT Trials Qualifier to Sectional Qualifiers. Saturday practices usually vary according to how the week went. This practice followed a week that looked like this:

They seemed pretty worn down from the week so I designed a 5 station practice.  Each station was 24min in duration with a two minute transition. In the past we have tried 15,18,20 min stations and found 24min seemed to be ideal in that we could keep the athletes focused on technique and working with good intensity. Since I am the only coach on deck for Saturday mornings, I feel running stations reinforces our philosophy of personal accountability (ie “do what I’m supposed to do”) while also embracing our team philosophy of teamwork (ie “help and encourage my fellow teammates” at each station, especially new members to the group). After our 10min Dryland Dynamic Warm-up, I put the athletes in groups of 4 based on their best events. It worked out to be one group of (500-1000-1650 athletes ie Long Sprinters), two groups of (200stk-400IM-500Fr athletes) and two groups of (50-100-200 athletes)

After warming up with what we call a “Golden Eagle” which is a 300 Swim, Pull, Kick, Paddle, Drill (300 SPKPdD) we get started on the stations.

Station 1: Lanes 1 & 2- was technique station for the 200 and below athletes just focusing on feeling the water with some sculling (SC) and then a build at the end of each round. When the other three groups came through they modified their set to do 8×25 Kick/Drill, 4×50 3 Drill, 1 Build and then went to what we call Aerobic Power by swimming [email protected]:00 with a 25 Sprint into an easy 50 free.

Station 2: Lanes 3 & 4- consisted of stretch cord belts hooked to the starting block handles. Four of the 5 groups did the set like this: 8 swims @2:20, odd repeats were 100yds going Sprint down to the bulkhead and easy swim return. When they were swimming back easy their lane partner would then go. For the even repeats they would just go a 25 full sprint to the bulkhead and once to the bulkhead take about 10 sec to adjust the belt and then go about 15m sprint speed assisted back. Their lane partner would be pulling the cord a bit just to keep the slack out of the way. Once the partner returned to the wall they took off for their 50. When the Long Sprinters came to this lane then went 8×[email protected] with short fins and paddles going a 200 smooth and then spiking the last 50. When we tell our athletes to spike a swim they pick up their tempo and really get their legs going. Their heart rates should be around 180-185 at the end of each repeat.

Station 4: Lanes 7 & 8- All five groups went 8×[email protected]:00 on our Power Towers. They would Sprint (SP) down and then easy swim return. They had to swim the same strokes in sets of 2 or 4. We use handheld rubber coated dumbbells to allow for quick changes in weights. The second athlete in the lane would wait until they teammate was just finishing their 25 before taking off. When they get back to the wall after the first 50 they immediately take off on the second 50 in order to make the 3:00 sendoff. We wanted all 25yd sprints to be under 24-25 sec and we wanted the athletes to count their strokes. I’ve found by having them count their stks they do not go too crazy with weight. While we are trying to overload them at this station we do not want to just throw technique out the window for the sake of total weight lifted! Sometimes the athletes would ask I take 5-10lbs out after they finished the first 50 before they started the second 50 which we found as a good way to hold stroke their stroke counts since they are more fatigued on the second 50.

Station 5: Dryland on the deck next to lanes 7 & 8- Everyone did the same program here which consisted of 4 rounds of going: 45 work and: 15 rest

Pullover Sit-up (SU) =ball is overhead when laying down, once the athlete sits up the ball is lowered to chest for a Chest Pass (CP) against the wall, ball is caught, raised above head and athlete then lowers back down.

V-Sit Twist and Slams= athlete is balanced on backside with their feet off the deck, holding the MB above their stomach they twist and slam the ball down next to the hip alternating sides each rep.

Hip Bridges= athlete lies on their back, legs bent with feet flat on deck. Bridge hips up and roll ball under their hips. Hips go down then back up, roll ball back. Repeat for: 45

Planking Leg Raises= On their toes with both hands on the ball, arms straight below shoulders, straight body line. Once core is locked in slowly raise one leg up and hold about 1-2 sec then lower and repeat with other leg. Keep alternating for: 45

Standing Russian Twists= Hold ball out in front of body palms up and twist back and forth. Sometimes if we have enough wall space they will twist and toss the ball on a wall behind them. This am they just twisted.

Stretch/Rest/Hydrate= We have pull-up bars close by and they hang for about :10 then go into choice stretching before starting next round.

When everyone finished their last station, those at Stations 2-4 did a 200 Easy Cool Down (CD) while Stations 1 & 5 helped break down the towers and roll up the stretch cords.

Notes: We use this 24min 5 station template a good bit but depending on the time of the year change the stations. Sometimes the Dryland Station will be an Ikkos station or TIVO. We have also used parachutes, shoe kicking or monofins during the year to change things up.

After 24 years of using other coaches’ ideas I learned from clinics and talking on the deck, I thought it was time to contribute something back. Hopefully some coaches will have found something they can use in their program. If anyone has any questions feel free to comment or email me directly at : [email protected]

Good Luck and Thank you!

Haven’t read through it, but 2 thumbs up… keep em coming!

read it through, thanks- this is good stuff!

Scott-great practice. Even more impressive that it–the sharing of the thought behind it. keep it up Garrett.

There’s some great work here, and it’s obvious that Scott has put a lot of thought into it. Thanks for sharing!