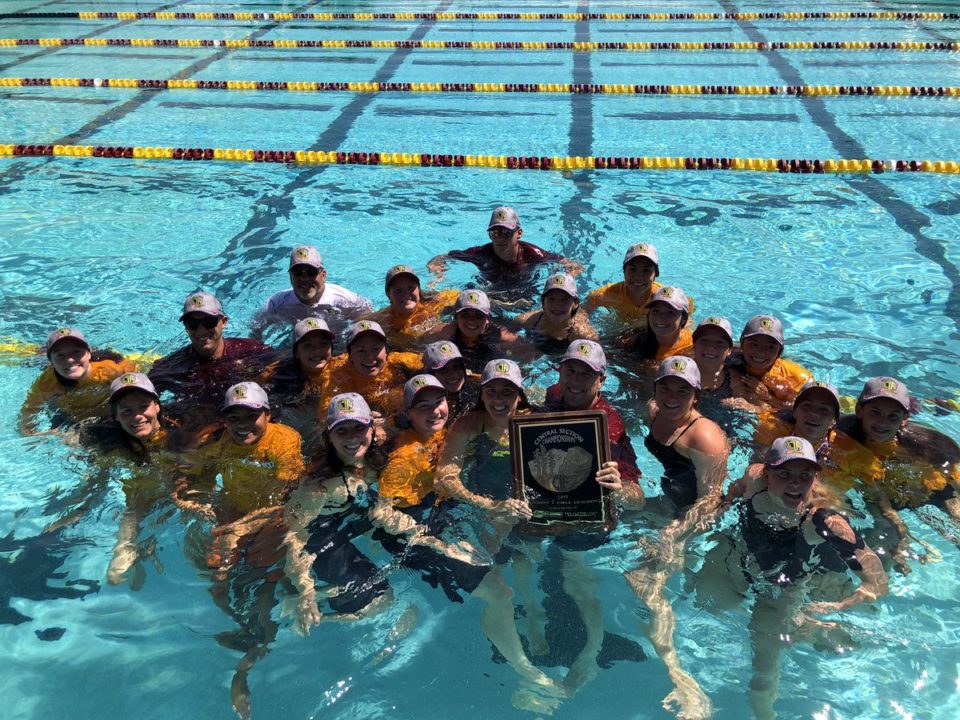 During the finals session of the 2019 CIF Central Section Championships, the girls of Clovis West and Clovis North took part in an epic dual for the section title. In the process, three D1 records and six D2 records fell, totalling 18 records taken down during the two-day championship meet.

The meet started off with Clovis North winning the 200 medley relay with a 1:46.98. But shortly after, a vengeful Claire Tuggle won the 200 free for Clovis North with a 1:46.19. Tuggle dethroned Clovis West’s Abby Samansky, who took second with a 1:49.02, and took down Samansky’s D1 record.

Into the 50 free, Golden West’s Mackenzie Garza maintained her top prelims spot with a 23.83. Brooke Costella dipped under the 24-second mark with a 23.91, taking second place for Clovis North.

After taking second in the 200 free, Clovis West’s Abby Samansky came back and won the 100 free with a 50.46. Golden West’s 50 free champ Mackenzie Garza took second with a 51.34, re-breaking her day-old D2 record.

Clovis West kept the streak going in the 200 free relay with their dominant win of 1:36.91, powered by Samansky’s 23.36 anchor split. In the same event, the Golden West girls took 0.01 seconds off their prelims D2 record with their 8th place time of 1:41.29. Golden West anchor Garza had the fastest split of the entire field, popping an intimidating 23.18.

Into the 400 free relay, Clovis North’s 50 free runner-up Brooke Costella and 200/500 free champ Claire Tuggle chased down Clovis West to defeat their foe with a time of 3:29.81.

The boys of Clovis West and Clovis North had a dual of their own in the 200 medley relay. Clovis West had the advantage throughout the race. It wasn’t until Clovis North’s Cole Fleming challenged Clovis West with a blistering 20.50 anchor split. However, Clovis West was able to hold off Fleming and win by a 0.08-second advantage with a 1:34.74.

Clovis North’s Ben Forbes joined female counterpart Tuggle in the D1 record-breaking frenzy with his winning 200 free time of 1:36.43. Later in the meet, Forbes held off Nipomo freshman Parker Reynolds (4:30.77) to win with a 4:29.16.

Into the 200 IM, Clovis West freshman Ian Belflower took off in the breaststroke leg ahead of Bakersfield senior Nathan Roodzant to win with a 1:53.09. Roodzant took second with a 1:53.89, breaking the D2 event record.

In the 200 free relay, Clovis North took their first relay win of the meet. The relay was powered by Ben Forbes‘ swift 20.10 anchor split that aided their winning time of 1:23.73, which surpassed Buchanan (1:23.94). Later, El Diamente’s Preston Niayesh chipped half a second off his 100 breast D2 record from Friday and won with a 56.57.

The Clovis North boys sealed the D1 section title with their win in the 400 free relay (3:04.34). Clovis North won the meet with a comfortable 369 points.

In the same event, the 4th place Kingsburg team broke the sixth D2 record of the day with a 3:14.27. The Kingsburg team also sealed their D2 title with a total of 153.5 points.

If it is going to be a close one, might as well make it 1 point. Our girls fought hard to hold off a strong CN team. Thanks to my assistant coaches for being the best staff in the valley. 23 championships in a row. #2tickets 💪🏻💪🏻 pic.twitter.com/sA0xkgo1w2

No better feeling. This was a special group. 🏆💦 pic.twitter.com/LId4kHYp3M

My daughter is Claire’s teammate & was on the 400 free relay with her at this meet. Claire is not arrogant about her future; she’s hopeful & confident as 99% of elite athletes are. She knows much is expected of her but she takes it in stride & is having fun swimming high school like Missy did. If she talks publicly about the Olympics, it’s because people ask her that question all the time. I have been around swimming for 40 years; I’ve seen the age group phenoms fizzle out. This girl is different.

I don’t see the point in your negativity Yozhik, especially regarding a kid that you don’t know. Will Claire be an Olympian? I don’t know,… Read more »

Thanks for your post. That’s what i was expecting asking some adults who knows her better to share some information about her. I’m trying to follow her swimming career but the only information i mostly have is dry numbers of her results and few articles that focus mostly on her NAG records. Her case is quite different by far from, for example of Regan Smith’s one where her coach is trying to protect her from public high expectations and she herself is very careful in her interviews with prognosis about herself. I saw a few interviews with Claire and they were more like of Lilly King’s type. She is a 14 years old girl and she isn’t a child anymore… Read more »

Is it possible to get more information about Claire Tuggle from her coach: plans, targets, progress, expectations, physical conditions, etc. Not her interview but from some adults around her, even from her parents. At her interviews she sounds like a child who used to be treated already like a girl who is well ahead of anybody in her age group. It is kind of unexpected to hear from very young lady that she liked her traveling during very successful 2018 season especially because it was free. And she easily gets involved in the conversation about possibility of making Olympic team. I know that Katie Ledecky’s example inspires many young talented girls, but she is still only 14 to speak about… Read more »

Seems like you’re reading pretty deep into a young lady that’s just starting to see her career take off here. Progress in swimming is seldom linear. Some stagnation here and there is ridiculously normal. I can hardly think of any world-class swimmer that hasn’t had long periods of time without lulls in improvement (I had about three years of not dropping in my best/only event).

What makes it harder to fight through those periods of time is comments like yours. We do read swimswam comments (despite the negative effects they can have on our mental health) so please keep that in mind when writing comments. We are more than just a time on a scoreboard.

One a positive note,… Read more »

She is a fast kid. Swimming is like that.

What do you think she has to read about herself to get better? A lot of great expectations and excitements in the media since she was 10? Will it help? Or just nothing. Has she raised a lot of interest in her? Yes. Are some people like me and maybe you hoping that another Missy Franklin or Regan Smith is entering the competition? Yes. Is it deserved to be discussed in civilized, professional and polite manner? Yes. Therefore I am looking forward for more information from respectable sources. You gave me some insight from your own experience. Thank you. But i also trying to understand what this phenom actually is: early development like it was with Becca Mann or we… Read more »

doubt she reads swimswam comments in the first place

She didn’t compete in the fall but did the pro series meet in January and was in decent shape. I don’t know what her workout schedule was in the fall or why she didn’t do the junior national meet in December. I don’t think its our business to know these details for a 14 year old. The meet yesterday it is doubtful she had any rest. Serious LCM swimmers don’t taper for a high school yards meet in early May and she didn’t need to rest to win easily. The state championship is in her town next weekend so she is likely swimming and there will be better competition so maybe a day or 2 of rest could be coming… Read more »

Perhaps she’s leaving something in the bag for State next weekend. After all, both Claire’s times were in striking distance of her PB despite not having that much competition outside of her normal swim team mates (because most of these Clovis girls all swim on the same club team, despite different high schools). She should have some girls pushing her in the 200 especially next week….let’s see how she responds

Nobody predicts the end of her career. Moreover people wants it to continue and flourish. And they are looking in statistics of her results to see some positive patterns. And when there are questions then more inside information is welcome.
You are not exactly right about low interest of LCM swimmers in SCY competition. Katie Ledecky being already a World records holder was specially prepared, rested and tapered for her last high school meets. But I think it was more about her high school legacy. Claire Tuggle is only freshman. Let’s wait for the state championships.