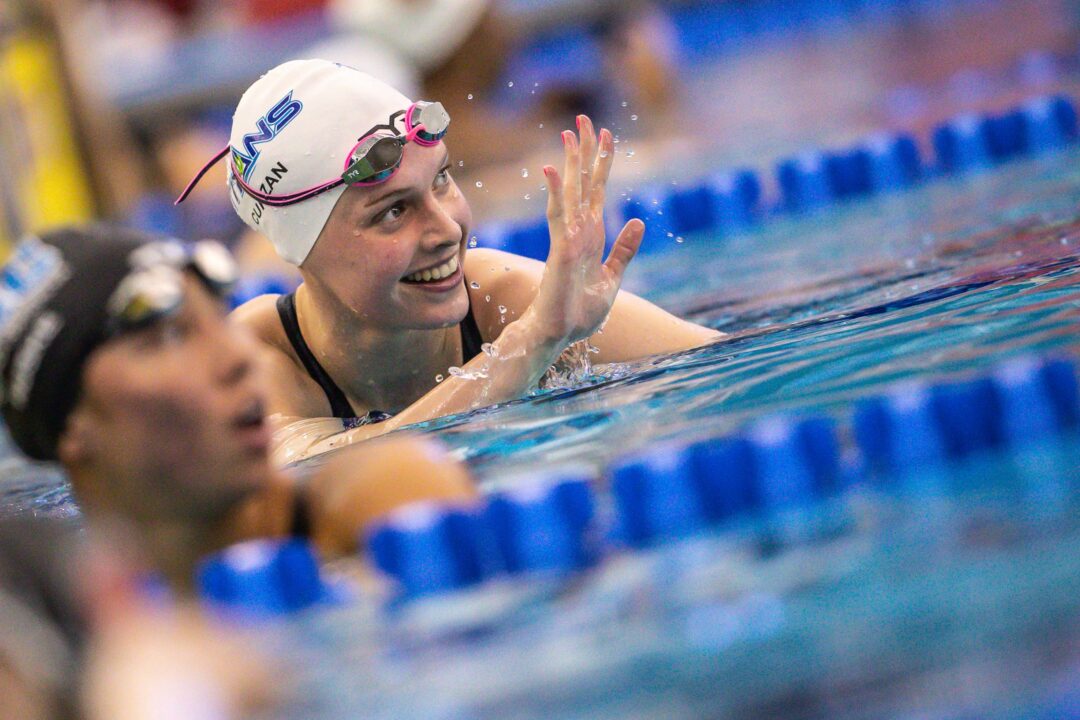 Stanford freshman Claire Curzan may be better known as a butterflier, but she's also now the 10th-fastest performer in the 200 yard back. Current photo via Jack Spitser/Spitser Photography

Stanford freshman Claire Curzan swam her first personal best in the 200 yard back in three years tonight in Greensboro, and she made the most of the effort, moving into the top ten all-time in the event with a 1:48.50 to win by over three seconds.

It’s worth noting that Smith, Ruck, and Curzan all swam for Stanford, although Smith was not yet at Stanford when she set the all-time record back in 2019. Additionally, Curzan bumped yet another Stanford swimmer, Ella Eastin, out of the top ten with tonight’s swim. Ruck, meanwhile, is still competing for Stanford, and took 2nd to Curzan tonight with a 1:51.66.

Curzan is known primarily for the 100 fly, where she’s set numerous NAG records in both yards and meters and has represented in major international meets, including the Olympics. But she’s no slouch in the 200 back, either, as tonight’s race showed. Here’s a quick comparison of her split tonight to those of her previous lifetime best.

Compared to three years ago, all of her splits except one were faster tonight than in 2019, and the difference on the outlier was only by 0.31s.

That’s the second individual win of the meet for Curzan. Thursday she won the 50 free in 21.55, just ahead of Stanford teammates Torri Huske and Ruck. Yesterday, she came in 2nd in the 100 fly behind Huske, who like Curzan represented the US in the long course 100 fly in Tokyo and who owns the American Record in that event.

What? She is a sprint butterflyer.

Great swim Claire! Stanford is a great place to be a 200 backstroker. Claire, Eastin, Regan, Taylor, all under 1:50. Am I missing anyone? That’s a competitive top 10 all time.

3 of the 4 were Olympians before Stanford. I’m sure they’d be just as fast at other schools. Actually I think Regan Smith’s best time was prior to Stanford.

And she just went her best time while training AT Stanford.

Regan and Taylor were both better before Stanford.

Maya Dirado won the 200 Back in Rio after improving immensely at Stanford!

Regan Smith posted her best times in the women’s 200 backstroke, whether it was short course yards or long course meters, in calendar year 2019.