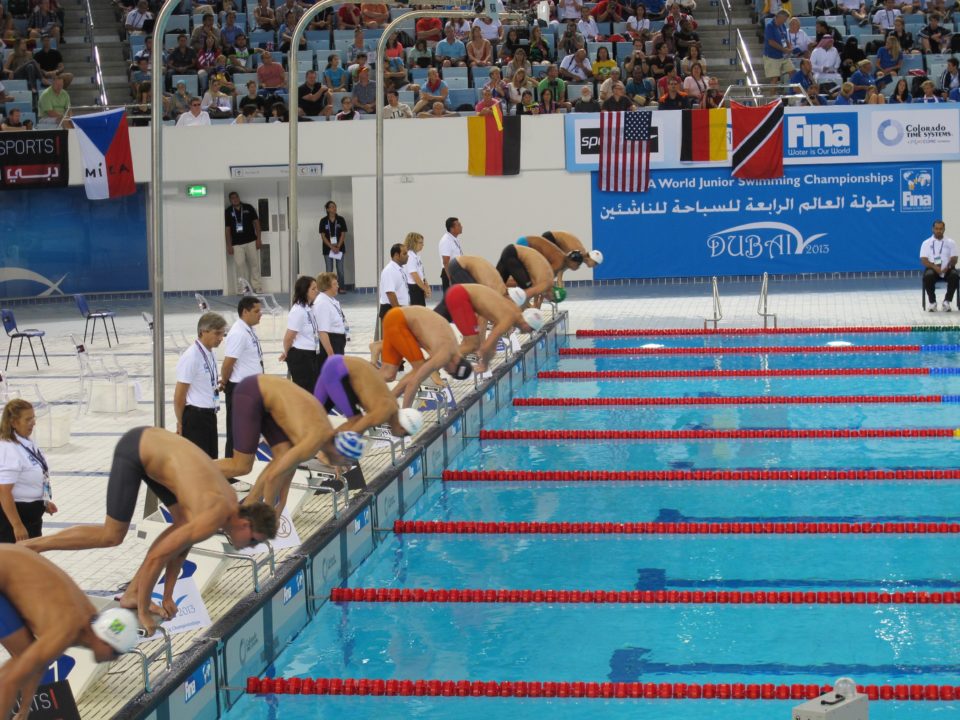 Luke Percy was also among the top seeds coming out of prelims, with his coming in the 100 free. (Photo: Colin Blair/SwimSwam.com)

Waddell discussed not being able to financially support himself with swimming and why he wasn’t able to compete in the ISL as he had planned.

A reminder of all the links you need to follow the 2013 FINA Junior World Championships.

Luke Percy said in an interview on Thursday that his goal for the 100 free preliminaries was to get a good middle lane going into the semi’s.

He did just that in Friday’s preliminary session at the 2013 FINA Junior World Championships, where he was a 49.33 for the top overall seed, taking out American Caeleb Dressel in 49.48.

Dressel was out very fast: half-a-second better than anybody else in the field including Percy. It will be interesting to see how that pacing plays out as we move through the rounds of this race.

Australia’s Regan Leong was 3rd in 49.68, followed by Poland’s Sebastian Szczepanski (49.90) and Trinidad/American dual citizen Dylan Carter rounded out the top 5, under 50 seconds, in 49.93.

The 2nd American, Paul Powers, was 9th in 50.55. Australia, South Africa, the U.S., Russia, and T&T all put a pair into the semi-finals, while Italy just missed as Andrea D’Arrigo was 17th in 51.13 (still a best time for the Virginia commit, though).

Russia’s Svetlana Chimrova, after dominating the 50 fly in a triple-record-breaking performance, has begun her quest for the 100 fly in the same manner. She took the top seed in prelims in 59.30, which breaks the 2011 record of 59.37 held by Britain’s Rachel Kelly.

Australia’s Jemma Schlicht and Hungary’s Liliana Szilagyi were the 2nd and 3rd seeds in 59.7 and 59.8, respectively, and that was the extent of the swimmers under a minute.

American Courtney Weaver was the 4th seed in 1:00.27; she’s part of a huge group of swimmers who have been under a minute in this race, but didn’t get there in prelims. The Czech Republic’s Lucie Svecena was 5th in 1:00.41, and Italy’s Claudia Tarzia was 6th in 1:00.51.

American Katie McLaughlin, who was the number-two overall seed coming in behind Chimrova, came up 8th in prelims in 1:00.93.

Canadian Luke Reilly topped a very tight preliminary round of the boys’ 400 IM with a 4:20.15, really pushing himself on the freestyle leg, and generally the whole back-half, to take that position.

That’s a best time for him, but there’s a lot of very, very fast guys lying in wait. That includes Russian Semen Makovich, the European Junior Champion, who comes in as the 2nd seed in 4:20.25.

Also in the final is American Jay Litherland in 4:22.91 and his countrymate Gunnar Bentz in 4:23.37. American men really like to slow-play the early rounds of this 400 IM, and it looks like Litherland and Bentz may have done that masterfully.

Brazil’s rising young superstar Brandonn Almeida came in just 9th and failed to final, but his 4:24.96 is a best time for him.

Russia’s Rozaliya Nasretdinova has had an up-and-down meet sof ar, but looked very good in the prelims of this 50 free in posting a 25.28 for the top seed. The Russians will have two into the semis, as Maria Baklakova, who is really more of a 100-200 swimmer, tied for 5th in 25.73 (tied with Britain’s Grace Vertigans).

Also taking a high seed and a center lane for the semi-finals was Lithuanian Ruta Meilutyte in 25.36. She’ll have another multi-event final, with the 50 free semis coming first and then the 50 back final coming two events later. Lithuania did not enter a girls’ 400 medley relay, though, so she’ll avoid another triple.

The 3rd seed goes to Australia’s Shayna Jack in 25.62, with Brazil’s Fernanda Delgado putting a relative hurt upon her seed time with a 25.70 for 4th.

The top American was Abby Weitzeil out of California with a 25.92, and Katie McLaughlin advanced once again with a 26.36. New Zealand 14-year old Gabrielle Fa’Amausili also advanced in 26.10.

Slovenia’s Peter John Stevens put up another Championship Record, far from the first we’ve seen in breaststroke at this meet, with a 27.47 in the boys’ preliminary heats, followed by Poland’s Maciej Holub and Brazil’s Pedro Cardona tied for 2nd in 28.18.

The Russians, who have been dominating the breaststrokes at this meet so far, sit only 5th (Ilya Khomenko in 28.23) and 7th (Vsevolod Zanko in 28.30) so far, but they’re not far off of at least the 2nd seed, either.

The Americans’ only semi-finalist will be Carsten Vissering, who was 15th in 28.80; Andy Schuehler did best his seed time though with a 29.36 for 26th place. He’s really more of a 200 breaststroker anyway.

The Australians took the top seed in the girls’ 400 free relay in 3:44.56, which included a 55.90 leadoff from Chelsea Gilbert. They will be hard to catch in finals, given that they did that time without using their best sprinter, Shayna Jack, who they seem to be saving for finals.

The Americans, meanwhile, did use their two entries into the 100 free to take 2nd in 3:45.09. They still have at least one possible change of their own to make, however, as they could potentially stick Katie McLaughlin into this finals relay, but remember she has two other races tonight (100 fly and 50 free), so she wouldn’t be totally fresh either.

Note: finishing the morning session were the early heats of the girls’ 1500, where Australian Kiah Melverton took the top seed so far in 16:44.21.

What is the problem with the official link?
http://vod.dmi.ae/jwplayer/player16.php?width=650&height=476&channel=dubaisports3
They show soccer players.
Where is swimming?

They talk about a future soccer game and I don’t understand anything!
We are waiting for swimming!