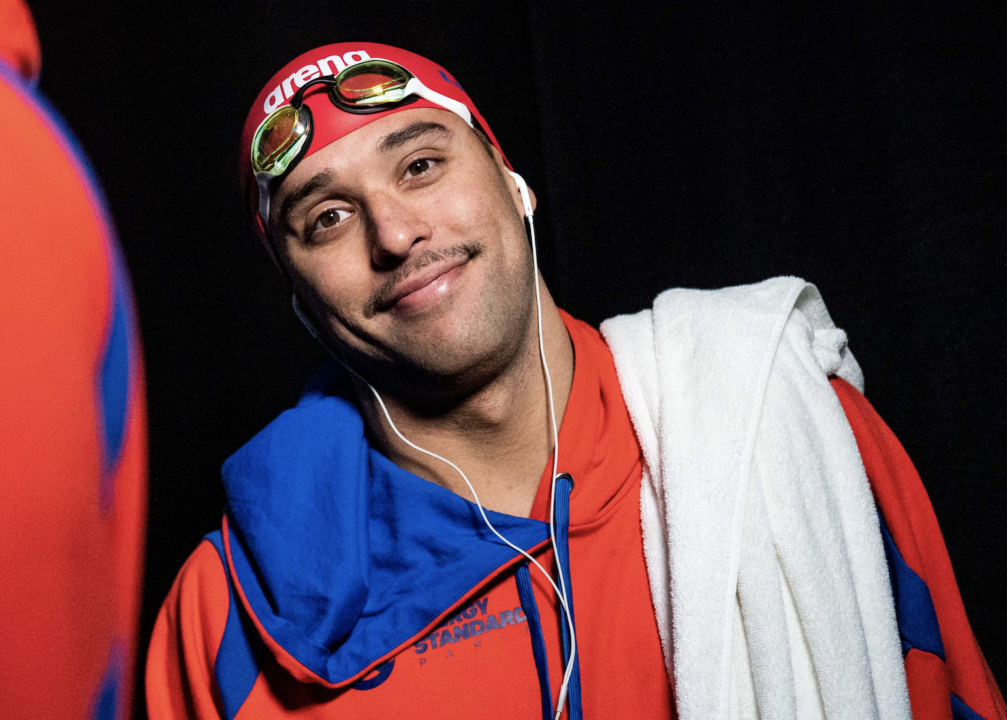 Chad le Clos has participated in a freestyle 'skins' race once this season, but on Tuesday he'll get to swim his preferred stroke, butterfly. Archive photo via Mine Kasapoglu/ISL

After sweeping the men’s and women’s medley relays, the defending ISL champions Energy Standard earned the right to choose both ‘skins’ events strokes in Match #9 of the 2020 ISL season.

With a 65.5 point lead ahead of 2nd place Tokyo Frog Kings, a lead that should grow on day 2, Energy Standard will win the meet regardless of the ‘skins’ outcome barring a disaster scenario.

The two events that really didn’t make sense for them to choose on the men’s side would be backstroke, where their top finisher Evgeny Rylov was just 5th in the individual on Monday, and freestyle, where their go-to Florent Manaudou is taking a rest for this meet.

In their last meet, Energy Standard chose breaststrokes. Even without their top swimmer Ilya Shymanovich winning the final round of that skins race, he still scored the most points by being aggressive and taking the Jackpot points in the opening round.

But with Iron’s Emre Sakci swimming so well, and Iron’s coaching staff possibly learning from Energy’s tactics, that wouldn’t have been a given in the rematch.

So they’re instead giving one of their superstars Chad le Clos the chance. He won the 100 fly by half-a-second on Mondayin 49.33, though Iron’s Nicholas Santos (49.87). Le Clos has improved every meet and that 100 fly is a new season-best for him.

So, while he’s certainly not guaranteed a victory, he does have some momentum here.

Le Clos did swim skins in Match #6, but it was a freestyle event. He was 6th in the prelims round, ending his meet.

Other challengers will include Tokyo’s Takeshi Kawamoto, who was only another tenth behind Santos in the 100 fly and is also very good in the 50.

The women’s choice was really not a difficult one. With Sarah Sjostrom looking back on form and winning the individual 50 free in 23.42, plus Femke Heemskerk taking 3rd in 23.74, the freestyles should maximize Energy Standard’s total points.

That does, however, mean that Ranomi Kromowidjojo of Iron gets a shot. She has been very good in skins throughout her career, including beating Sjostrom in their lone head-to-head skins matchup in Season 1.

Finally a fly skins, ought to be great. Let’s see how Dressel’s training with Troy holds up against Santos & leClos.

Dressel is on the other match

There’s already been a fly skins won by Shields.

Yup, downvotes aplenty – my bad, got ahead of myself in wanting to see that kind of match-up. Dressel is indeed in the other match as Rafael says in his reply.

I think old man Santos will smash everyone on the field

I think he is better off going all out on the first one to try and get jackpot points. Santos might have trouble holding up no matter what.

Jackpoting on the first round is a great tactic though, Ilya Dolphinkickovich did it last week and he got more points than Sakci

Kolesnikov in back might have been a better choice given the amazing times he’s doing in the 100.