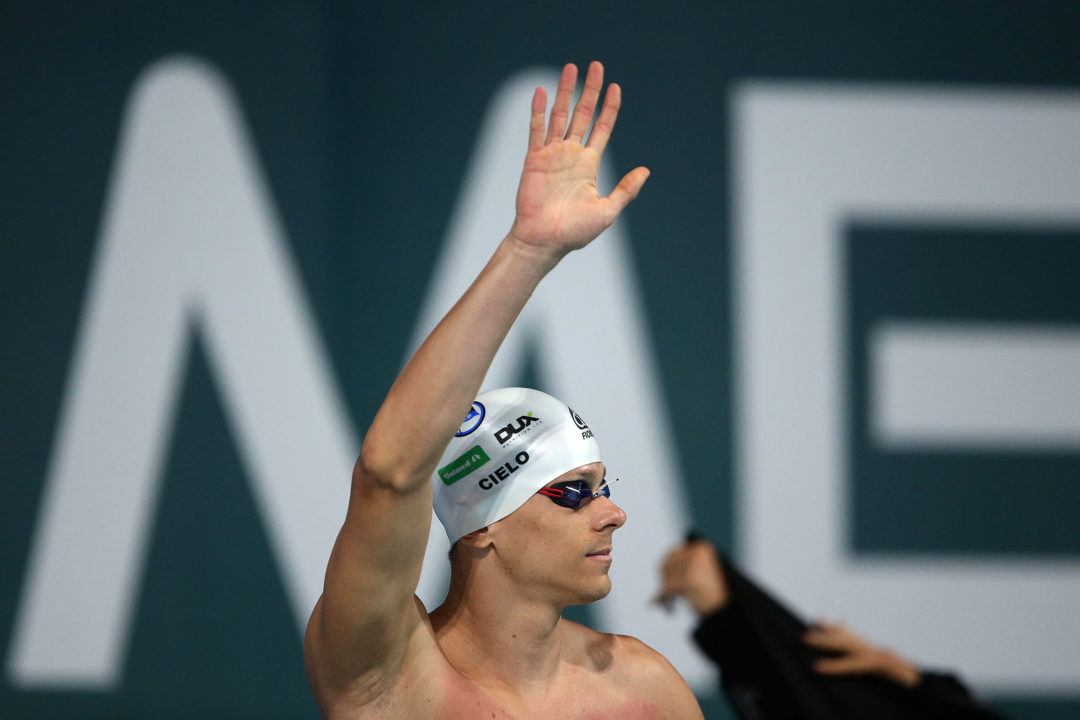 Despite speculation that Brazilian sprint legend Cesar Cielo might retire after competing at the 2018 FINA Short Course World Championships in December, it appears he might not be done yet.

Cielo, 31, has recently posted multiple videos of himself doing speedwork in the pool, and Brazilian news site Globe Esporte is reporting that he’ll compete in February at the Copa Heller in Mexico (he is featured prominently in the meet’s marketing), and at another meet in Peru in March, and perhaps “a few others” in Europe.

If he doesn’t race at the 2019 Brazil Trophy (formerly Maria Lenk) in April, Cielo won’t be eligible for the 2019 FINA World Championships or Pan American Games.

His career was on the line in 2016 when he missed the Olympic Team, but after taking over half a year off, Cielo returned in time to train for the 2017 FINA World Championships, where he helped his team to a relay silver medal 4×100 free and made the 50 free final.

Cielo opted not to attend the 2018 Pan-Pacific Championships, instead going all-in for the 2018 FINA Short Course World Championships. There, he had splits of 21.02 and 46.34 respectively as the Brazilians took 3rd in both the men’s 4×50 medley and 4×100 free relays, and he also placed 7th individually in the 50 free and had two other sub-21 freestyle splits. His 2018 best time of 22.01 in the 50 ranked him third in the nation.

Following that Worlds, in an interview with Globo Esporte, he would not confirm he was retiring and said he’d make the decision this year, with the 2020 Olympic Games looming.

If Worlds was, in fact, his final major competition, Cielo would retire the fastest man in history in both the 50 and 100 freestyle (LCM). He set both records in 2009 during the super-suit era. Having won three Olympic medals – including Brazil’s first ever swimming gold in 2008 – he is considered the most successful Brazilian swimmer in history.

Love to see Cielo make the 2019 World Championship team in the 50 and shake things up.
If nothing else it creates excitement anytime the long course world record holder in the 50 and 100free is in the pool.

if I pay all my blessing to dean ferris the great he will lend me 0.01 percent of his power to do so

And for a few years in the lead up.

It would be fitting if his last meet were the world championships, and his 50 free and 100 free records get taken down a decade after he set them. I think Proud might break 21, but just miss it. Who knows? Maybe Dressel has a shot at it as well if he is in top form. Hopefully he breaks the 100 free and 100 fly records.

Proud seems to have all the momentum in the world on his side, other than the false starts, and is the only swimmer on the scene right now who seems willing to go all-in on the 50 free (which I believe to be a necessary sacrifice to go sub-21 in textile, for now).

Fratus hasn’t quit. 21.17 is better than Proud. If his shoulder’s OK, Fratus seems to be in the mix. I’d also say when it comes time for OT’s, Michael Andrew is all in for the 50 free. He’ll swim other events, but he knows that’s his only shot. No one breaks 21.