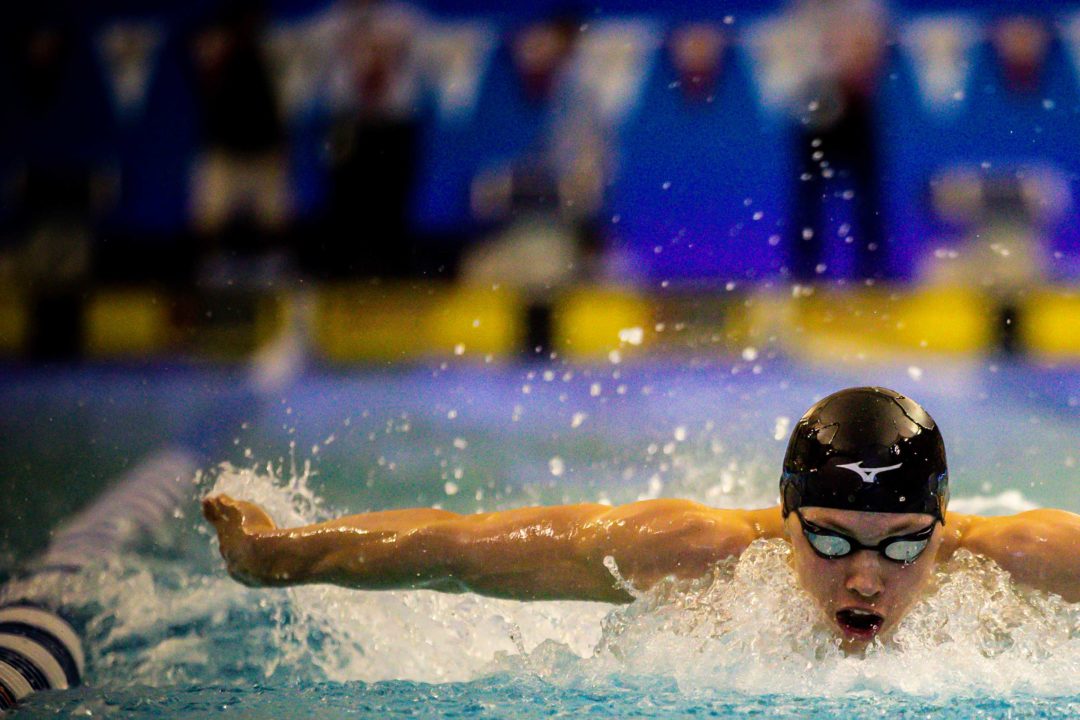 In his 2nd of what will be three 200 IM swims this weekend in Oxford, Carson Foster swam a 1:58.83 in the 200 IM final on Friday. Archive photo via Jack Spitser/Spitser Photography

Step 2 of US National Teamer Carson Foster‘s plan to test his Olympic Trials strategy this weekend at a meet in Oxford, Ohio is complete via a 1:58.83 in the finals of the boys’ 200 IM on Friday evening.

That swim follows a 2:00.27 in prelims on Friday morning.

As SwimSwam reported earlier, Foster is testing his racing strategy in a prelims-semifinals-finals format this weekend, even though there is no semi-finals at this weekend’s meet. He will race a 200 fly prelim on Saturday morning, and presuming he qualifies for a final (which he should), he will swim the finals of the 200 fly as a 200 IM to get the morning-evening-evening swim cadence that he would experience if he advanced to the finals at this summer’s U.S. Olympic Trials.

Finishing 2nd in that race was 15-year old Spencer Aurnou-Rhees of the Ohio State Swim Club in a new lifetime best of 2:05.70. That time improves his position as the fastest 15-year old in the country this season, leaving him now more than two-and-a-half seconds clear of any other American 15-year old.

It’s awesome we get to see both videos!!

Second place went 2:05.70–so its almost like there was a competition (at least in the first 50)

I wonder if this is tapered

If we think of this as truly representative of OTs, this is an extremely encouraging time for “semi-finals”.

But we do not

Yeah, nothing can simulate the atmosphere of OTs. It’s a pressure cooker.

Obviously Carson getting a ‘3rd swim’ is more important than anything else.

I don’t get what the big deal is… the 17th place kid isn’t some poor kid, he will get his shot but not at this random meet in February.

He isn’t stealing a spot. He’s still qualifying just like everyone else. It’s not like they are just gifting him the spot in finals.

I’m going to jump in his lane on the breastroke leg. On my way to Ohio right now

Stealing a poor kids spot? The poor kid should swim fast enough to final. It’s a valuable lesson to learn early on that the “poor kid” is in charge of their destiny. Worrying about what others do might get instagram followers, but blaming your lack of success on others is a cop out. The great succeed regardless. It’s a cold world no blanket

Carson should at least give him a few bucks for the snack bar. Maybe some hot cocoa will make the kid feel better

They are running 4 heats in finals with the D final being 16 & Under.

Dude, he makes finals he does what he wants. 17th place should swim faster.

@TAA This is completely inappropriate. SwimSwam does not do sarcasm. I’m surprised you haven’t been banned. I guess the down votes are enough. /s

The crazy part is he could go 2:00 and 1:58 without using that much energy come trials. He could be a 1:56 realistically

He didn’t use that much energy?

I’m referring to him being tapered and fully prepared at OT’s, I’m assuming he needs to try harder to go 1:58 at a random LC meet in February in the middle of heavy training. But being able to do these times now is a good indicator of where he could be in a few months