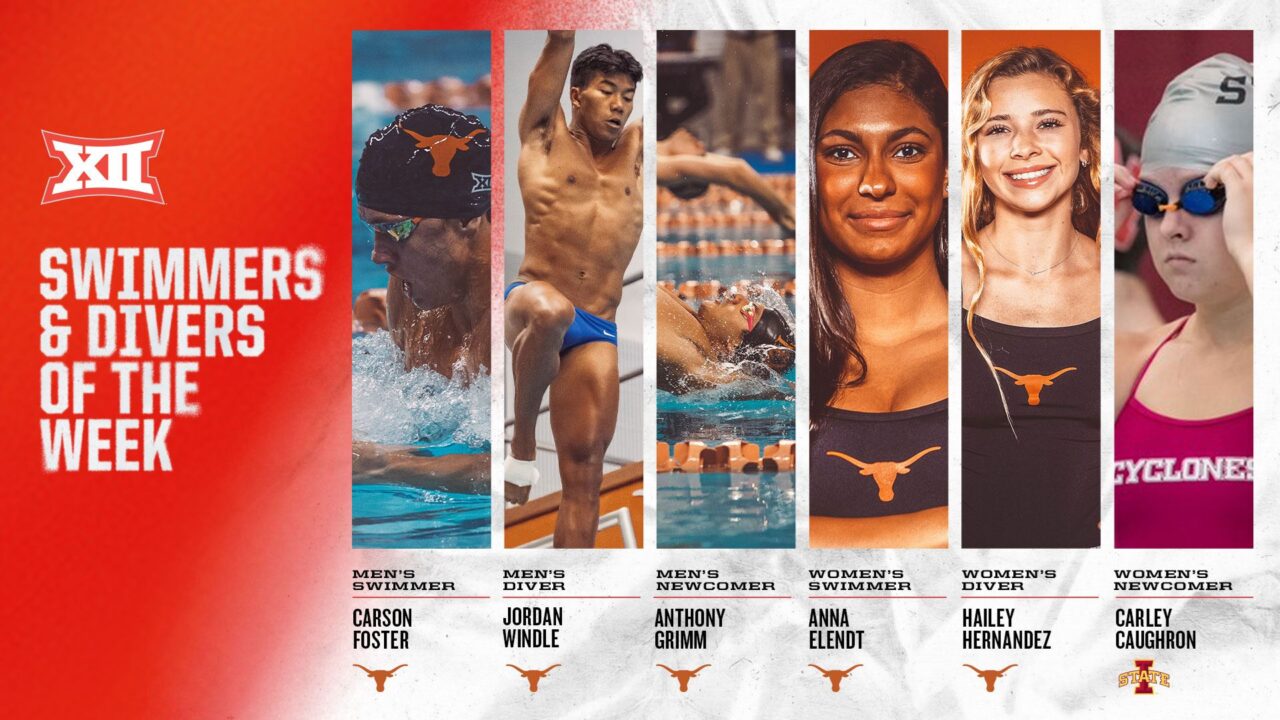 Ballard will join the year BYU moves to the Big 12 conference. She has shown substantial growth since converting to sprinting within the past year.

Carson Foster: “I can’t even put into words how big of a relief it is”

After dropping a huge PB in prelims, Foster was able to nearly duplicate that time in finals and earn his first-ever spot on a senior international team

Foster helped No. 1 Texas improve to 3-0 this season defeating No. 9 Virginia 191-116 while setting the Virginia pool record time in the men’s 400 IM at 3:40.48. The sophomore followed up with a 200 fly win with a time of 1:44.29. The Cincinnati, Ohio native later erased Ryan Lochte’s previous 200 backstroke pool record to win the event with the nation’s leading time of 1:42. 14. Foster now has two Big 12 Swimmer of the Week awards this season and three in his career.

Windle swept the diving events in Charlottesville and received his third Big 12 Diver of the Week this season and his 20th career Big 12 weekly award. The four-time defending Big 12 Diver of the Year etched his way into Virginia pool history, claiming the pool record with his score of 411.15 in the 1-meter. The 2021 3-meter NCAA champion won that event with 420.75 points.

Grimm led both Texas relays to wins, swimming the first leg in each against the Cavaliers. The 400 medley relay time ranks as the fifth-fastest in the NCAA this season, while the 200 relay time is the ninth-fastest. The freshman finished second to teammate Alvin Jiang in the 100 backstroke with his time of 48.13. This is Grimm’s first Big 12 honor.

Elendt helped the Longhorns finish second against No. 1 Virginia in the 200 medley relay, swimming the second leg of the relay with an overall time of 1:37.11. The sophomore’s time ranks as the fifth-fastest time this season and the top time in the Big 12. The 2021 Big 12 100 and 200-yard breaststroke champion posted another second-place finish with the sixth-fastest time in the country at 59.33 in the 100 breaststroke. The Dreieich, Germany native was a part of the second-place finish in the 400 medley relay with the fourth-fastest time in the NCAA this season (3:32.82) and finished in the top three of the 200 breaststroke with a top-10 NCAA time at 2:10.12. Elendt now has two Big 12 Weekly awards throughout her career.

Hernandez continued her impressive freshman campaign, winning the 1-meter diving against the defending NCAA National Champions with a pool-record score of 333.0 points. The Southlake, Texas native finished the weekend with a second-place finish in the 3-meter with 357.98 points. This is Hernandez’s third Big 12 Diver of the Week.

Caughron helped the Cyclones defeat Omaha 180-79 to earn her first Big 12 accolade. The freshman’s first-place performance in the 100-yard freestyle (52.68) was her first time competing in the event at the collegiate level. She notched the fastest time of 52.68 and has four event titles in five dual meets. Caughron also helped Iowa State finish first in the 200 medley relay and the 400 free relay.

I saw both the 400 IM and the 200 fly of Carson Foster. I can only image both of those really hurt, since I don’t think UT does a lot of rest before dual/tri meets.
What I found so “beautiful” was the excellence of his stroke form from beginning to last. I mean, I would show my young swimmers these videos and say ‘That’s how it looks”!
Bravo to Carson and Bravi to UT/Austin