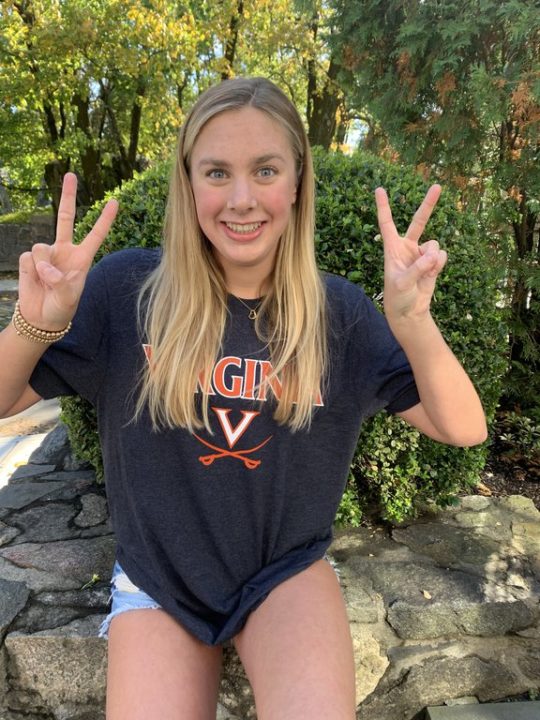 Caroline Pennington has always found solace in swimming. It’s created a comfortable routine for her, allowing her to forget her troubles and focus instead on the tasks at hand. For Pennington, like many, the COVID-19 pandemic effectively ruined the schedule that she had grown accustomed to. However, it also brought hidden opportunity and unexpected silver linings for the rising high school senior. For one, she found a new, different team to train with that allowed her to focus on distance training. For another, she discovered a skin condition in time to treat it before it more seriously affected her health.

Last year, Pennington swam for Greenwich Academy (in her home state of CT) and Badger Swim Club (NY), but it was with her club team that she had her breakthrough. In May 2019, she made her first Winter Junior Nationals cut. The summer following, she dropped a significant amount in both the mile and the 400 free, earning her US Open cut as well.

When the first of the two championship meets came around in December, she didn’t compete as well as she would’ve liked to, she says, and so the idea of switching teams to practice at a different level began to rise. Though at Winter Junior Nationals she placed third in the 1650 free (16:29.64) and seventh in the 500 free (4:49.89), dropping even more time, Pennington’s desire to take a step forward with her training continued to grow.

In the first weeks of 2020, Pennington had to take time off from practice due to illness, missing her club senior championships. Then late February and early March came along, and she was offered the opportunity to train in NC with the TAC Titans. She could practice and learn more about swimming open water and long course with the team; this, in the beginnings of the pandemic as NY pools began to shut down. For two weeks, Pennington trained distance swimming (in the pool and in the open water) with other distance specialists. Once more, however, pools shut down in her area. As a result, she decided to quarantine with family in Houston, TX, until they reopened.

After arriving in Houston, Pennington trained in a backyard pool. “My biggest thing about pools shutting down was keeping the feel of the water,” she says. “I wasn’t doing 500s or long sets… I just didn’t want to lose my stroke.”

While out in the April sun, Pennington’s grandmother spotted something on her leg. At first, she suspected it was a mole or a freckle and didn’t think much of it, but Pennington FaceTimed a dermatologist just in case. The doctor wasn’t alarmed on the original call, but a day later, Pennington received a second call that a biopsy was needed. The office was opened just for her, and the tests revealed melanoma on the skin of her calf. She underwent surgery to remove the spot, and had a few more biopsied for good measure. Of her diagnosis, Pennington says that had she not been somewhere warm, somewhere where she would rather wear shorts over pants, she might not have noticed the melanoma until later; her being in the right place at the right time was one silver lining of the pandemic for her.

After her surgery, Pennington found herself facing the challenge of staying out of the water. She says of her recovery, “You go from swimming every day to everything just stopping.”

To keep herself moving and exercising during her short hiatus from the pool, Pennington walked – sometimes just for a mile, just for 25 minutes – and once she worked up to it, ran as well. Once she was back in the pool, she felt renewed in focus and motivation.

“For me, exercising has always been what created a routine. It takes your mind off things,” Pennington says. “I needed to work out, I wanted to because it kept that bit of normalcy in my life.”

In Texas, the combination of all Pennington had been adapting to – her fight against skin cancer, her online changes with school, her difficulty in finding an open pool to swim in – caused her to rethink her decisions, reassess where she was at both in life and in swim training. She realized that she needed to focus on recovery and her specific distance-training needs. After some reflection, Pennington decided that she needed to move to NC to compete with the TAC Titans.

Of her transfer, she says, “I was given a new and different opportunity [to swim with TAC] and so I took it. I’m still close with my [Badger] coach… I just felt like TAC could help me reach even farther.”

An additional silver lining for Pennington, then, was finding a way to continue to improve. “[This pandemic] is not a great time for anyone, but it’s important to be grateful and to use the time to become a better version of yourself,” she adds.

Over this summer, Pennington continued to drop time with the Titans. At her most recent meet – the TAC Titans Invitational in August – she dropped over a second off her fastest 500 free, swimming a 4:46.76 and placing third behind teammates and USA Swimming National Teamers Ashley Twitchell (who has qualified for the Tokyo Olympic Games in open water) and Charlotte Hook. Pennington, a verbal commit to the University of Virginia, also swam a lifetime best in the 200 free (1:50.19, placing first) and in the 1650 free (16:17.75, eighth). With one more year left before her college career begins, Pennington’s mile time is comparable to ACC Championship A-final times and it’s also just off the NCAA DI Championship invite time from last year (16:17.45).

For the fall, Pennington says, “I was planning on living at home for a normal senior year, swimming with my old team, and even now, I’ve decided to still go home for the first day and all the traditions.” She adds, “I’m excited for one last year at home with friends, but as for swimming, I’m excited to spend time with new friends and see what I can achieve.”

In regards to swimming, Pennington is excited to see how fast she can go. Of her college goals, she says, “I’m hoping to do as well as I can in college and at NCAAs, and though right now I don’t have a qualifying time, I would love to make it in the mile and the 500.”

By qualifying for and competing at NCAAs, Pennington hopes to set herself up for more successful college seasons and to assist her team in their goal of winning the meet.

she is my cousin
very nice and good job

I read that she left UVA after just one day there,and has entered the transfer portal.any idea what happened?

really showing the privilege of warmer states moving so much just to swim!!

How nice to have so many opportunities in different states!

Caroline did NOT compete for Greenwich Academy in the ‘19-‘20 school year. Given she’s been in NC and TX for months, I hope she follows CT’s current travel advisory and quarantines for 14 days before showing up at school first day in CT.

Thanks for the advice to Caroline via Swimswam’s comment section.

Can she swim in NY or CT if she has to quarantine ?

Inspiring story about grit and overcoming adversity during the worst of times!

We are looking forward to your arrival in C’ville, Caroline! #WeWill

Apparently 8 people ARE NOT looking forward to your arrival in C’ville, Caroline. I guess they are jealous!