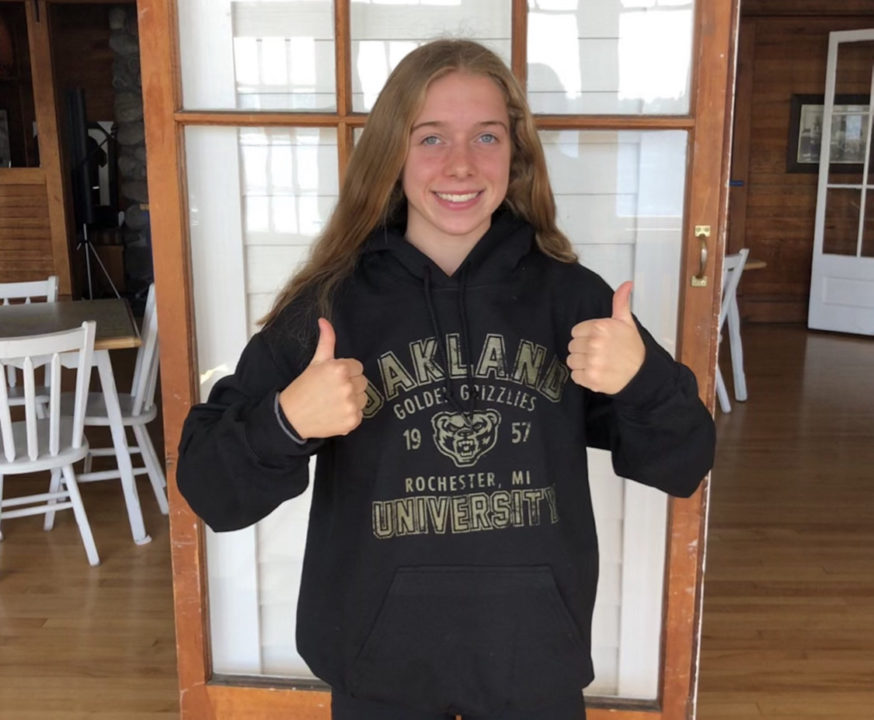 “I am excited to announce my verbal commitment to Oakland University! I chose Oakland because of their coaching staff, tightly knit team and strong history. Thank you to my family, coaches, and teammates for their support. I can’t wait to be a golden grizzly!”

Thiessen does not have any official yards times due to the fact that she is from Canada.

If Thiessen is able to convert her success in the long course pool into short course, she should have an immediate impact on Oakland’s roster as an individual scorer and relay asset. At the 2020 Horizon League Championships, Thiessen’s converted best times in the 100 freestyle, 200 freestyle, and 500 freestyle would’ve made the A-final, while her converted time in the 1650 would’ve won her a bronze medal in the event.

Thiessen’s best 400 and 1500 freestyle times converted would have both ranked 2nd on Oakland’s roster last year behind Horizon League Champions Emily Aycock and Sohvi Nenonen. Additionally, her best 50 freestyle time converted would’ve ranked 4th on the team, giving her the potential to be a valuable relay swimmer.

At the 2020 Horizon League Championships, Oakland won both the men and women’s team titles, while ranking up victories in 26 out of the 40 events. During her time in Oakland, Thiessen will overlap one year with both Aycock and Nenonen. She will also join fellow Canadians Julia Cook, Kiera Brough, and Taylor Bailey on the roster.

With her commitment, Thiessen joins Ajete Eggers, who is also from Canada, in Oakland’s class of 2025.