The Cardinal's Jimmy Yoder blazed to a 1:41.31 in a 200 fly time trial, dropping over 2.5 seconds from his season best to move from 35th in the nation to 7th. It was also over a half second under the NCAA 'A' cut (1:41.86). Stock photo via Tim Binning/TheSwimPictures.com 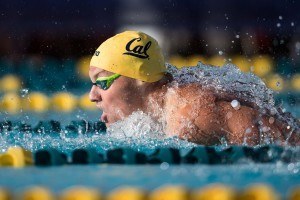 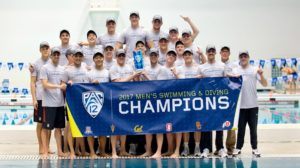 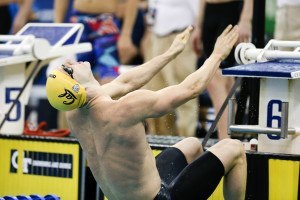 A handful of swimmers set themselves up for a potential NCAA bid during time trials on day 1 of the 2017 Men’s Pac-12 Championships in Federal Way, Washington. The Cardinal’s Jimmy Yoder blazed to a 1:41.31 in a 200 fly time trial, dropping over 2.5 seconds from his season best to move from 35th in the nation to 7th. It was also over a half second under the NCAA ‘A’ cut (1:41.86) making him a lock for NCAAs. Freshman teammate Will Macmillan posted a personal best 1:43.71, moving him close to the bubble with a 34th place ranking.

Another swimmer securing his spot at NCAAs was Cal’s Matt Whittle, who dropped almost 2 seconds from his best time with his 1:53.82 in the 200 breast. That’s well under the 1:55.31 it took to get invited last season and ties him for 12th in the nation with only the rest of Pac-12s, ACCs, and a couple of last chance meets to go.

Stanford’s Matt Anderson also put up a likely qualifying time, swimming a 1:54.10 in that event. That knocked a second off his season best time, moving him up from 28th in the nation to 18th. Cal’s Nick Silverthorn is right at the bubble now, posting a 1:55.10 in time trials to move up to 29th in the nation, but he’ll have a shot at improving his ranking later in the meet.

USC’s Jonathan Knox swam a personal best 1:41.61 in the 200 back to move from 57th in the nation to 19th, so he should be safe for a bid. Cal freshman Andy Song rocked a 1:42.47 to lower his best time by over 3 seconds. He’s now ranked 32nd in the nation, so he’ll have to improve on that a little bit later in the meet to qualify for NCAAs.