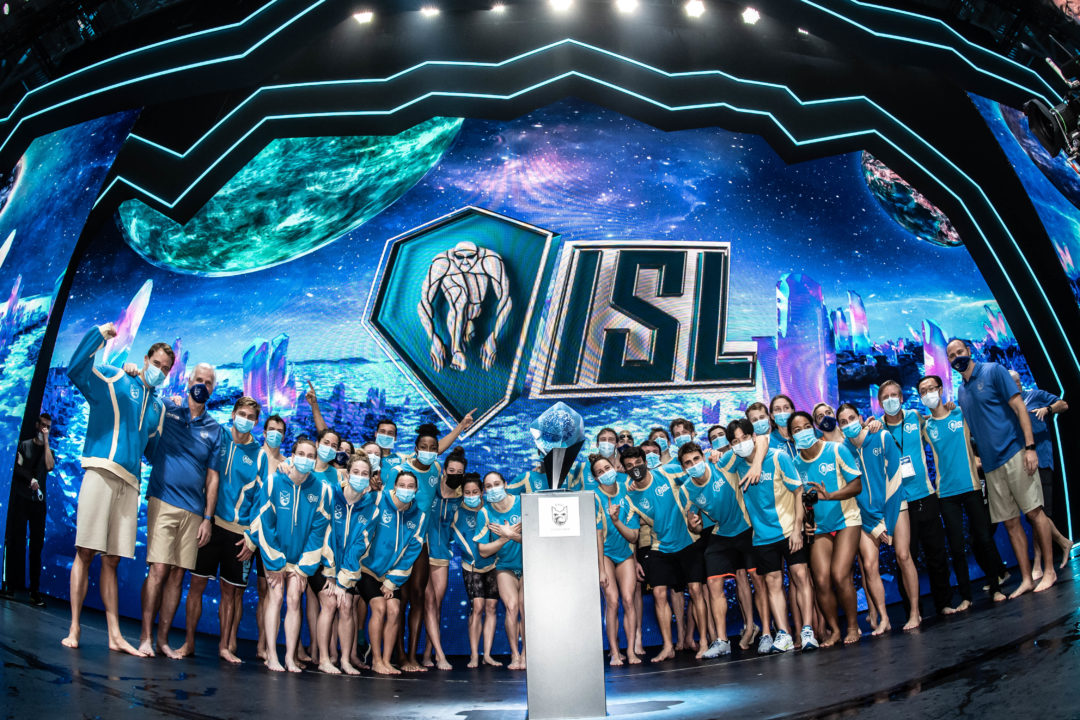 The Cali Condors are the 2020 International Swimming League champions.

Dressel also finishes as the Season MVP with 463.5 points.

Last season, Cali placed third in the final behind Energy Standard and the London Roar.

The Condors are also the first club in league history to finish a season undefeated. They topped Energy Standard in their only other head-to-head showdown back in Match 1, while last season’s champions fell to the London Roar at the 2019 European Derby.

With the title all but sealed up, Lilly King won the women’s breaststroke skins for the fifth time this season, going 1-2 with fellow Condor Molly Hannis, to confirm the victory. King finishes the match with 71 points, second to Dressel.

The vast improvement for the Condors in  just a one-year span has come from a variety of places, but chief among them was their ability to dominate the rookie class coming out of college. Their star swimmers such as Dressel, King and Olivia Smoliga were surrounded by the likes of Erika Brown, Eddie Wang, Coleman Stewart and Beata Nelson, who were incredibly valuable assets all season long.

We also saw standout campaigns come from Hannis, Hali Flickinger and Marcin Cieslak, among others.

Another big improvement compared to last season came from their men’s team (other than Dressel), which was led by Stewart, Cieslak, Justin Ress and Townley Haas. Nic Fink, though he was out with injury early, came on strong during the playoffs and was very valuable on breaststroke as well.

With the 2020 Olympic Games cancelled, among many other competitions, this was really the only major international meet that we’ll see in 2020, and the swimmers certainly delivered.

love the f-bomb from Caeleb in the celebration.

At least we know the swimmers are buying in haha

It was not close at all with Energy

Yea. They almost ran away with it. I was worried that losing Margalis would hurt them but it didn’t. Jackpot definitely helped plus the team peaked at the final, where it mattered most. Breastroke skins for the women paid off. Vital points from other team members. All in all, it was a well earned victory.

Wish the Aussies could have participated

LON would, most certainly, have been a stronger & more competitive outfit had their top bracket AUS been present but, in all honesty, that would’ve only put them ahead of Energy rather than bridge the massive gap still remaining to match Cali. This year’s Cali outfit was just that “stacked” and more importantly, their big guns delivered.

Agree – if anything Roar having their Aussie swimmers would probably have increased the winning margin of Cali as London and Energy would have traded points in women’s sprint free/fly. Roar would probably be favourites in the women’s medley relay though and would have been able to take them away from back.

Impact on the men’s races in the final is a lot more limited.

You are correct with regards to the impact of C1 & McKeon but have overlooked the potential impact of Atherton. Whilst Toussaint was an excellent fill-in, in races longer than 50 she was tending to “die” on the last 25. Whilst we have no idea whether 2020 Atherton matched up to 2019 vintage, most races were swum much slower than her times from last year other than Smoliga in the final. At worst, she would’ve allowed LON a very real 1-2 punch in these events and a stronger hand in any female backstroke skins.

Agree the male impact would’ve been reduced. A fit Chalmers may’ve been a factor in sprint F/S and, along with Graham who won most 200F/S in… Read more »

The big winning margin is mostly because of jackpots. They’re only 20 points ahead of Energy with no jackpots.

they just deserve to win , what an incredible team

Disappointing that the commentators turned the meet into a one man show.

I think that man turned it into a one man show

I know people were making fun of the Cali men who weren’t Dressel, but they still won the men’s scoring overall. Even with the Dressel cheat code, that’s impressive from the other guys.

Did Lilly end up getting #2 for season MVP? That was a very tight race.

Jonty was their coach. He is a great motivator and knows just the right words to encourage his swimmers.

Fully agree, whilst there was some shrewd recruiting; Skinner brought a whole different level of tactical savvy.