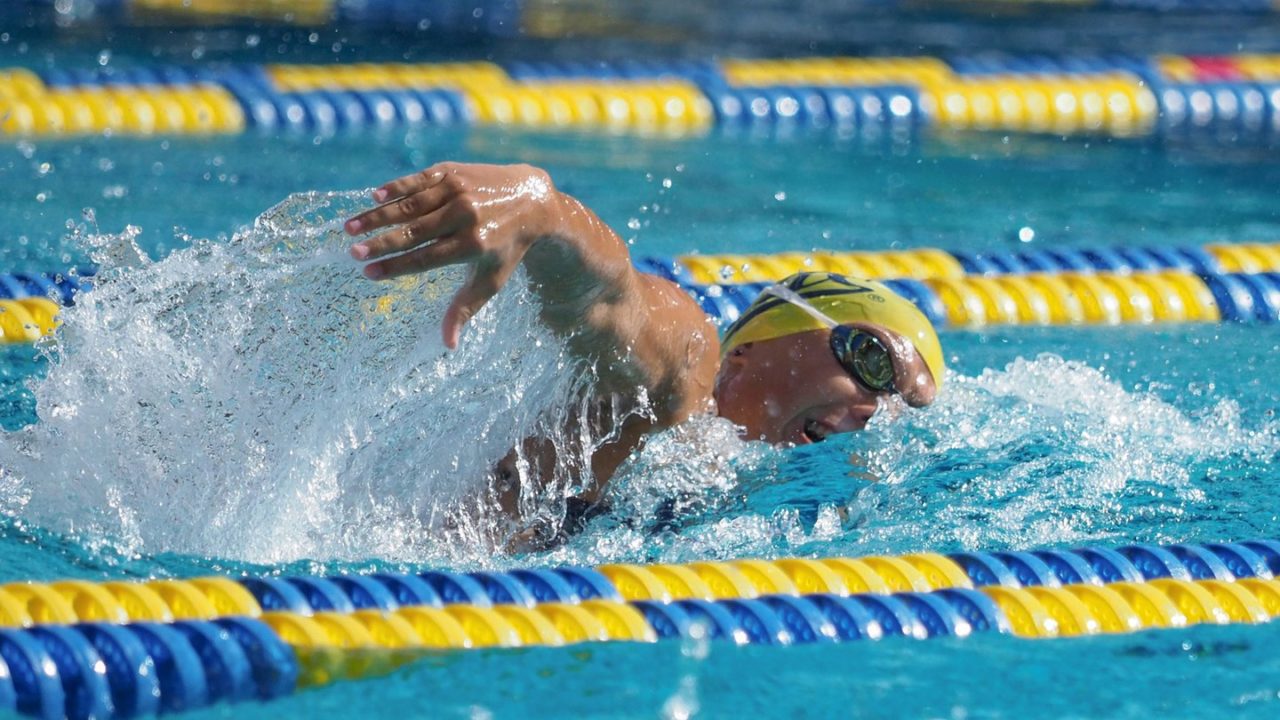 The swim was Ivey's 2nd best time in the 100 free this season, coming in under her previous best of 47.53, which she swam just 2 weeks ago in a dual with UCLA Stock photo via Cal Athletics, Al Sermeno-KLC fotos

Cal made the short trip to Stanford for a women’s dual today, besting the Cardinal in a lopsided 178-117 victory. Today marked the first time since 2015 that Cal has beaten Stanford in a dual meet, and the first time in 15 years the Golden Bears beat Stanford at Stanford.

Izzy Ivey was instrumental in the Cal victory, taking 3 individual events. Ivey took the 100 back in 51.12, leading a 1-2 charge by Cal, with freshman Isabelle Stadden taking 2nd in 52.22. Ivey’s swim was a season best, and well within a second of her lifetime best of 50.42. The swim moved Ivey up to 4th in the NCAA so far this year, jumping Stadden (51.24 season best) and Julia Cook.

Ivey then went on to post lifetime best in the 100 free, touching first with a time of 47.24. The swim was Ivey’s 2nd best time in the 100 free this season, coming in under her previous best of 47.53, which she swam just 2 weeks ago in a dual with UCLA. Cal had a huge presence in this event as well, with Eloise Riley taking 2nd in 48.82, and Emily Gantriis posting a 48.96. The swim keeps Ivey in 2nd in the NCAA standings this year, behind only Kate Douglass, who has a strong hold on the event currently with her 46.86.

STANFORD – Isabel Ivey won three events – including Cal dual-meet records in the 100-yard backstroke and 100-yard freestyle – leading the No. 1- ranked Golden Bears to a 178-117 victory over 10th-rated Stanford on Saturday. Overall, Cal captured 11 of 16 events, with a stretch that featured eight in a row.

Ivey was Cal’s only multi-winner on the day, and started her afternoon with a season-best 51.12 in the 100 back to maintain her position as the No. 2 performer in the country this year. The time was just under Isabelle Stadden’s dual-meet mark of 51.24 from Jan. 30 against UCLA. A short while later, Ivey swam to a lifetime-best 47.24 in the 100 free to break her own Cal dual-meet record from two weeks ago in Berkeley. She ended her day with a 51.68 winning time in the 100 butterfly.

The Bears got the meet off to a good start when Stadden, Ema Rajic, Ivey and Emily Gantriis secured a victory in the 200 medley relay with a time of 1:35.98, which was only 0.15 seconds off their season-best time. After Sarah DiMeco took second in the 1000 free (PR 9:43.60), Robin Neumann began a run of eight consecutive Cal wins when she prevailed in the 200 free in 1:44.10.

Rajic came within an eyelash of breaking her school record in the 100 breaststroke with a time of 58.89, while Rachel Klinker won the 200 fly in 1:54.35. Gantriis led a 1-2-3 Cal finish in the 50 free (22.27), with Elise Garcia and Eloise Riley right behind. Following Briana Thai’s win on the 1-meter springboard, the Bears swept the top three spots in the 100 free, as Riley and Gantriis touched after Ivey.

“I thought today was a good meet for us and I’m really proud of the women on our team,” head coach Teri McKeever said. “I appreciate Stanford honoring our seniors before the meet and I’d like to congratulate their seniors, as well. Now, we’ll turn our attention to Pac-12’s where we hope to keep building on our success these last few weeks.”

The Bears conclude their dual-meet season at 3-0 and next head to the Pac-12 Championships Feb. 24-27 in Houston, Texas.

STANFORD, Calif. – Stanford women’s swimming and diving picked up five wins and posted 19 NCAA provisional standards, but were unable to upset No. 1 California, Saturday at Avery Aquatic Center. The 10th-ranked Cardinal fell 178-117 in the team’s only dual competition of the season.

The Cardinal picked up victories in the 1000 free the 500 free, 200 breast, and concluded the dual with a thrilling victory in the 200 free relay. Mia Paulsen also led the Cardinal by winning the 3-meter diving.
Morgan Tankersley picked up a win in the 1000 freestyle, taking control roughly 700 yards into the race for the two-second victory in 9:41.41.

Prior to the meet, Stanford honored the senior class of Forde, Katie Glavinovich, Green, Hannah Kukugurya, Paulsen, Pitzer, Ashley Volpenhein and Grace Zhao. Kukugurya highlight of the day was a third-place showing in the 200 IM (1:58.90) while also finishing second in the 200 fly (1:55.31).

The Cardinal are scheduled next to compete at the Pac-12 Championships. The championships will be held Feb. 24-27, with the divers heading to Tucson, Ariz., and the swimmers heading to Houston, Texas.

What’s up with all the suited Pac-12 dual meets?

Suiting for dual meets has become way more commonplace – which makes sense to me, because if you’re preparing to race in a tech suit, why not prepare by racing in a tech suit?

On top of that – if my first meet of the season is January 15 and my conference meet is February 24, I’m taking every fast time I can at every opportunity. If you can get an invite time now (like Sam Baron in the 100 fly), you’ve hedged your risk against a COVID outbreak the week before Pac-12s.

No Lucie NordmanN or Grace Zhao for Stanford. Nordmann could help the relays, they looked really thin on numbers and can use all the help they can get.

May have been exposed to covid

Sidenote, I was impressed with Stanford’s Allie Raab 200 free time. She is primarily a breaststroker. But was able to throw down a impressive 200 free.

Allie Raab was a very good 200 freestyler out of high school and it seems like she’ll be a key member of Stanford’s 800 free relay come Pac 12s and NCAAs. While Stanford may not be as good as they usually are at this point in the season I’m excited to see how they do the rest of the season

Very true! Stanford recruits great, well rounded athletes and like many teams this year, they are having to piece together what they have.