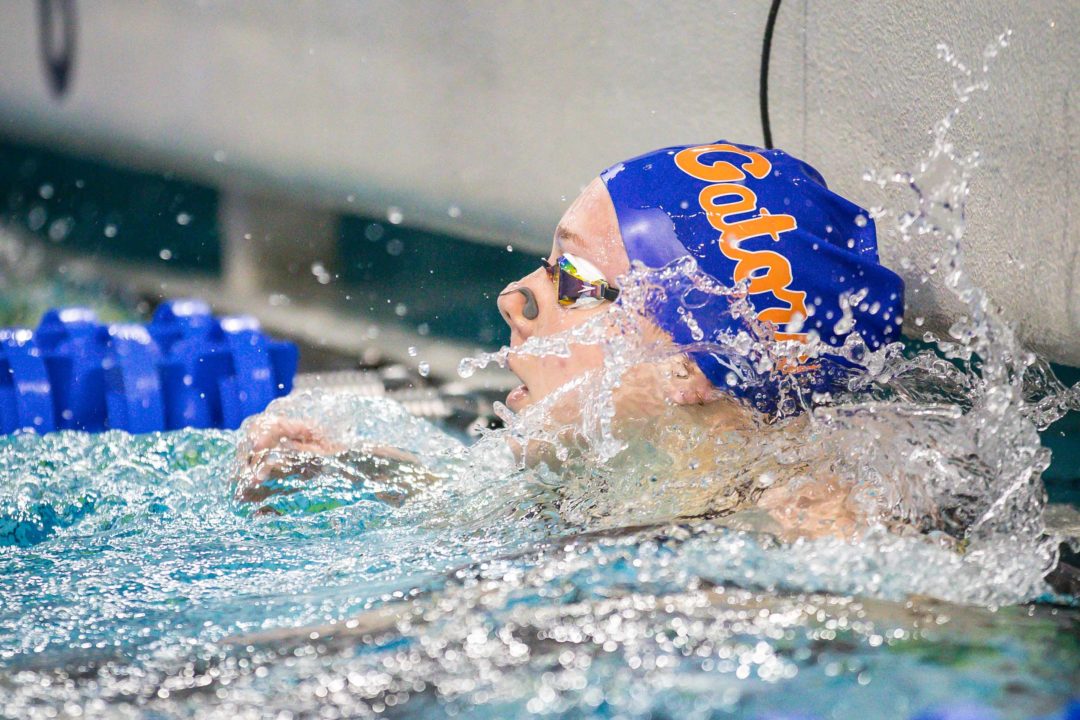 Led by Sherridon Dressel (above), the Florida women are off to their first 5-0 dual meet start since the 2003-2004 season. Archive photo via Jack Spitser/Spitser Photography

The first regular-season CSCAA dual-meet poll of the 2019-2020 NCAA Division I swimming & diving season has been released and both the men’s and women’s rankings have seen significant changes.

On the men’s side, while the top 3 of Cal, Texas, and NC State remain the same, with the first big shakeup coming from a rapid rise by the Missouri Tigers. That program, under the leadership this year of new head coach Andy Grevers, has been the topic of a lot of discussion as a result of their decision to suit up for every meet in the 2019-2020 NCAA season. But they also turned heads with a 190.5-109.5 trouncing of the Florida men in their first dual meet of the season. The loss slid Florida from 7th to 9th in the rankings.

Other big men’s movers to the positive are Texas A&M, who moved from 11 to 7 after sliding past the then-#5 Ohio State men; and the Tennessee men, who jumped from #16 to #10 after a 32-point victory over then#4 Virginia. That loss dropped Virgini all the way to #13.

Kentucky (#17) and Minnesota (#25) both moved into the men’s rankings for the first time this season.

On the women’s side of the pool, there’s a new #1 as the Florida Gators have vaulted ahead of the defending NCAA Champion Stanford Cardinal after a few convincing early-season wins. The 5-0 Gators took victories over both then-#18 Minnesota (202-97) and then-#6 Missouri (176-124) since the last polls were released. In total, the Florida women have outscored their first 5 opponents by a combined 995.5-491.5. Things don’t get any easier for the Gators moving forward: their next two dual meets are against #12 Georgia and #20 Florida State.

Tennessee also jumped in the rankings, from 15 to 3 after beating Virginia; so too did Auburn from 13 to 6. Auburn hasn’t had any really significant dual meets yet, but did place 2nd at the elite SMU Classic meet.

Meanwhile, the Indiana women had the biggest drop, falling from #9 to #18 in the latest polls. They opened their season by losing to Kentucky 161-39 and beating Notre Dame 172-128. The Hoosier women now sit one spot ahead of poll newcomers Akron. The Zips’ only intercollegiate dual meet so far this season was a 186-114 win over Miami University, but some strong swims at the Akron Zips Classic last weekend (including a 53.06 in the 100 fly, 1:57.55 in the 200 fly, and 22.84 in the 50 free from Paulina Nogaj) was enough to impress the voters.

The Northwestern women also made their poll debut for the season, jumping all the way to 15th. While they don’t have any big dual meet wins yet, they were 3rd at the SMU Classic behind only Louisville and Auburn. Between a nation-leading 400 IM time from Calypso Sheridan and a handful of school records (including from Sheridan in the 200 back in 1:56.57), the Wildcats did enough to impress voters.

Note that these CSCAA dual meet polls are intended to be reactive to team’s dual meet results, rather than a predictor of end-of-season rankings at the NCAA Championships.

Pittsburgh has an H at the end

Did the poll look at Michigan’s intrasquad? Would have though the women would get a boost from that as well as the men.

See other articles about intrasquas results not considered official or counted by CCSA.

Actually, in a sport like swimming it’s easier to get motivated to put in a hard effort in a “real” meet than in an intra-squad meet. I don’t even think in basketball a game of horse is any harder with or without another person, though maybe it would be for someone who suffers from competitive nerves. Shooting unguarded baskets (ie in horse) vs having a defender in your face, that’s the real difference but isn’t much of an analogy in this case.