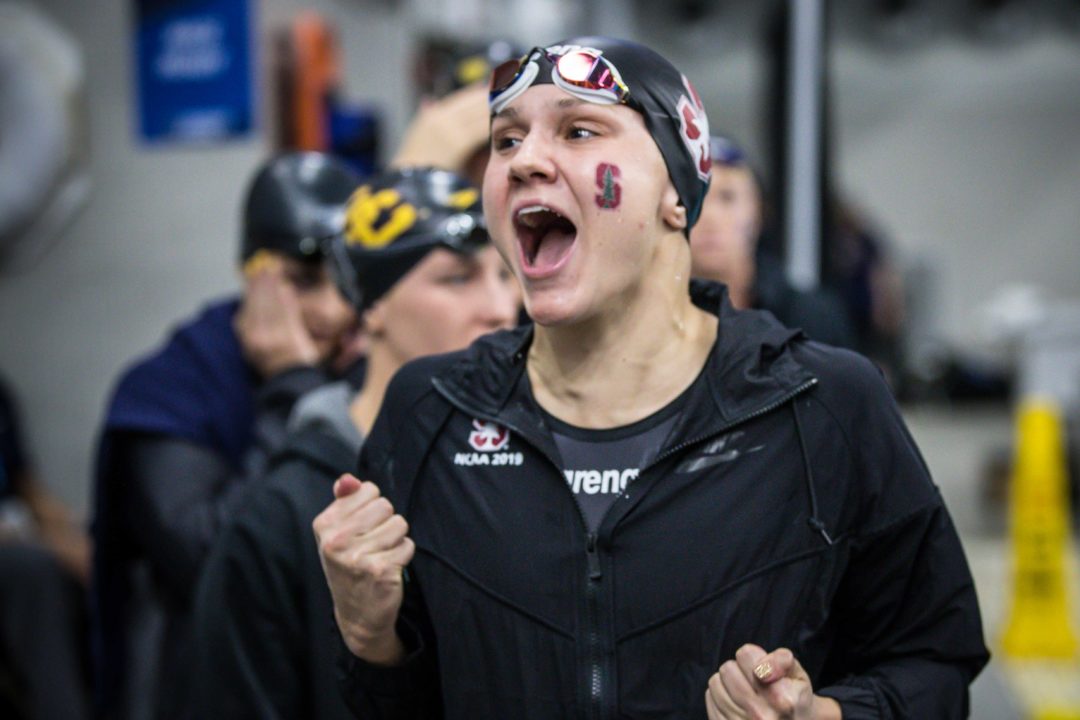 There's a lot of agreement among rankers with the top four teams. After that... not so much. Stanford chases four straight NCAA titles this spring. Archive photo via Jack Spitser/Spitser Photography

The teams that should finish in the top four all got the job done this morning, each school putting at least four swimmers into A-finals.

Martin del Campo is set to make a big impact upon her arrival at Oberlin as one of their top freestylers in both the sprints and mid-distance events.

Sure, we just wrapped up our College Swimming Previews series, which was a power ranking of sorts for the top 12 programs. But those longform previews have been in the works since late August, and a lot of recent redshirt news have caused some significant upheaval. Our first edition power rankings are a more up-to-date look at how we rank the top 20 programs nationally in the ‘preseason’ – dual meets have officially started, but there hasn’t yet been enough action to change much in our minds.

The Duke women had a great NCAA Championship meet last year. Combined with the addition of star diver Ali Watson, the Blue Devils are looking to sustain their program-level advances from the last half-decade or so. -BK

Nobody was hit as hard by redshirts as the Minnesota Gophers; that being said, they still return most of their All-American medley relays. The Gophers are still a top 20 team all day long. -BK

I’d still maintain this is a top-10, maybe top-7 team before the flood of redshirts (Padington, Bacon, Hayden). The relays might be sneaky-good, though, and even with the two divers sitting out, there are some intriguing names on the diving roster of this perennial dive powerhouse. -JA

Every individual NCAA entrant last year was a sophomore or junior. The program seems to be looking up, and they have some solid freshmen coming in. -JA

Wisconsin scored only 40 relay points at NCAAs last year. With one last season of eligibility for Beata Nelson, the pre-season favorite for swimmer of the year, they’ll be banking on assembling some bigger relay scores around her, even after some loss of depth to graduations -BK

It’s the Beata show, mostly. But she’s good enough to account for top-20 points in her 7 events, provided Wisconsin can put even decent relays around her. -JA

The Aggies were thwacked by graduations for the 2nd-straight year. This is always a hard team to read pre-season, because Steve Bultman seems to dig more NCAA scorers out of obscurity than anyone in the country. He’ll need to pull another rabbit to get the A&M women back into the top 10, where they had been a fixture prior to a 13th-place finish last season. -BK

Cierra Runge is back for what feels like her 10th year in the NCAA. Lindsay Looney is a really nice pickup for the Sun Devils. -JA

The Sun Devils had a ton of swimmers just miss scoring at NCAAs last season. If they can find a way to squeeze a few more tenths out in March, their future will tredn ‘up.’ -BK

Emma Nordin has hit her stride, and I’m excited to see what’s on tap for her this season. -KO

I kind of expect Louisville to rise from here (I ranked them #12) as the season goes. The loss of Mallory Comerford sets them back big-time in projected points. But the Cardinals usually conjure up some scorers when the chips are on the table. -JA

After losing their biggest star Lilly King to graduation and several other key contributors to transfer, the Hoosiers are climbing uphill this year. They still have talent, but they’ve lost all 4 of their assistants: some to better situations, some to worse. If Ray Looze gets his team into the top 10 this year, that will be his most impressive performance yet. -BK

Lilly King was keeping this team afloat for awhile now, and with her (and what feels like the entire coaching staff) out the door, this is no longer the IU team that stuck in the top 10. The incoming talent is very good (Emily Weiss, Cora Dupre and Ashley Turak should all have early impacts), but they’ll need to be. -JA

I have a really good feeling about the Auburn women, who seemed to have an awesome first year under head coach Gary Taylor. Getting Australian superstar Abbey Webb on the roster a year earlier than anticipated has these sprint relays looking really, really good. -JA

If Abbey Webb can transition well to yards, the sprint trifecta that she forms with Julie Meynen and Claire Fisch is really strong. The freshman class is huge; something good will probably develop here. -KO

It’s a fairly international roster, which has to give some cause for concern in an Olympic year. Louise Hansson is an impact swimmer with or without an NCAA taper. The Trojans need swimmers like Maggie Aroesty and Kirsten Vose to return to top form. -JA

A strong roster with few graduations, and they get yet another elite backstroke prospect in Caitlin Brooks. Kentucky makes its first-ever venture into the top 10 at NCAAs this year. You heard it here first. -JA

Zoie Hartman is a game-changer, and I think Eva Merrell will be a factor this year. We’ll see where she starts, though. -KO

This feels high for Georgia based on the past few lackluster NCAA finishes. But the numbers back it up: UGA is 6th in our projected returning points, even with the loss of Olivia Carter. Zoie Hartman is going to be a huge pickup. The real question is whether the relays come together or underperform like last year. -JA

A ton of talent outgoing and the relays are basically a half-demolished Lego toy at this point. Maggie MacNeil is a saving grace (but how much will she rest for NCAAs with Canadian Trials so close afterwards?) and Kaitlynn Sims is an excellent distance prospect. -JA

Pretty much all the top swimmers return. The two hurdles are (1) replacing Maddy Banic’s relay legs and (2) figuring out how to perform better at NCAAs. The wild card is transfer Kaitlin Harty, who could have no impact, but could be a word-beater in the backstrokes. -JA

In spite of their repeated struggles to hit their taper at NCAAs, the Texas divers continue to rock in March. They add another potential star to the roster this year in Jordan Skilken. -BK

Texas hasn’t completely put it together yet compared to their talent level… but they seem to be getting better every year. I’m mainly high on the Longhorns because of their relays, which they’ve been diligently assembling with every recruiting cycle. -JA

They have yet to really knock it out of the park at NCAAs (besides a few individuals) under Carol Capitani. I almost want them to *not* be super fast at season’s start, and work their way through the season… -KO

If it weren’t for Virginia, the Wolfpack would be the team we’re all buzzing about. The relays – especially the 200-yard ones – could be nasty. Katharine Berkoff could turn out to be the best freshman in the nation. -JA

The team with all the hype heading into the season, Virginia returns more points from 2019 NCAAs than anyone but Stanford or Cal. The relays could be amazing. How early will we notice this #1-ranked recruiting class? -JA

This is a team with a lot of energy, and their fan base has made itself very visible over the past couple of seasons. This is a year with big potential for the ‘Hoos to show that their bark isn’t more than their bite. -KO

Still an outstanding roster. Abbey Weitzeil singlehandedly makes any team competitive. Cal could have an outside shot to sweep all five relays. They’re not as deep as Stanford, but still very good. -JA

Weitzeil already looks ridiculously good. Which should scare a lot of people. -KO

From the chatter after Taylor Ruck‘s redshirt announcement, you’d think it was open season for taking down Stanford. Not even close. Everyone is forgetting how good this roster is top-to-bottom. Even without Ruck and the graduated Eastin, they return NCAA scorers Brooke Forde, Lauren Pitzer, Allie Raab, Lucie Nordmann, Katie Drabot, Erin Voss, Zoe Bartel, Anya Goeders, Amalie Fackenthal, Grace Zhao and Megan Byrnes. Should I add in the ones in position to move up and score? Do we even have enough space? -JA

We know what this team is capable of, but this tiny freshman class could become super important for sprint relays when it comes down to the nitty gritty in March. -KO

The consensus at 18 is kind of weird to me, given that 15-22 is pretty much a dead heat at this point.

“MacNeil is a fantastic backstroker, but someone needs to step up in fly for the Wolverines”??
Opposite day?

MacNeil does backstroke on the relays for Michigan a lot of the time. They switch her between fly and back to find the best order.

She didn’t at any serious meets last year

They actually have a number of flyers on the team. Some old and some new.