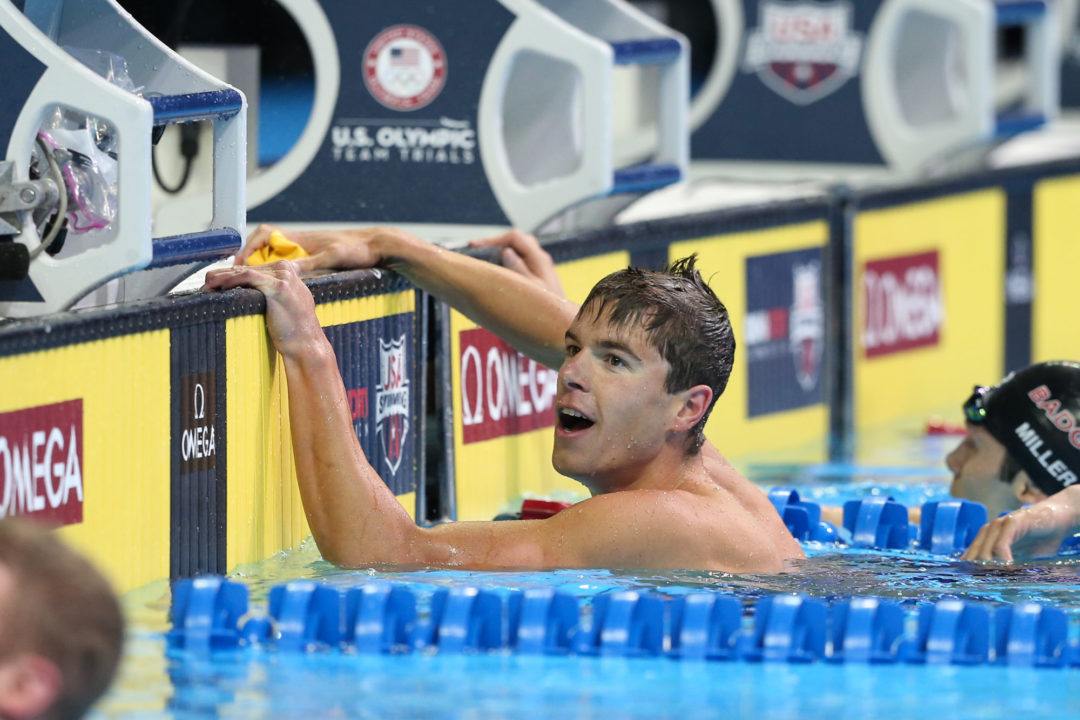 Josh Prenot won the 200 breast at the Olympic Trials, breaking the American record in the process. Current photo via Tim Binning/TheSwimPictures.com

The Cal Golden Bears are a nationally-renowned collegiate program, having won 36 combined individual and relay NCAA titles under just 9 years of coaching by Dave Durden. This summer, though, they’re going global and will have plenty of representation at the 2016 Olympic Games.

At the 2016 U.S. Olympic Trials, six current or former Cal Bears qualified for the 2016 U.S. Olympic team, and Durden himself was named as an assistant coach to the U.S. Men’s Olympic swim team. Check out the short but powerful video below that announces the Cal names that will represent the USA in Rio.

The Golden Bears had a very strong showing at the Olympic Trials in Omaha. Ryan Murphy, Jacob Pebley, Josh Prenot, and Tom Shields all qualified for their first Olympic team, while Prenot smashed the 200 breast American record in the final of that event. This isn’t the first rodeo for veterans Nathan Adrian and Anthony Ervin, meanwhile, who could both be on the American 4×100 free relay contending for gold in the Olympic final.

On the women’s side, Cal put current swimmer Kathleen Baker, former Bears Missy Franklin, Dana Vollmer, Cierra Runge, and future Bear Abbey Weitzeil on the Olympic team. Rising Cal sophomore Amy Bilquist and former Bears Caitlin Leverenz and Madison Kennedy were nearly named to the Olympic team, each finishing third in races where only the top two were eligible to make the team.

Cal should NOT take credit for Cierra Runge who left Cal in 2015 to seek a coaching environment that would give her a chance of making the Olympic team. She will swim for Wisconsin in the fall. Smart young woman. Hope to see Runge on the podium in Rio. Go USA!

Did you watch the video? It highlighted Adrian, Murphy, Prenot, Pebley, Shields, Ervin and Durden. And I heard an interview from Durden giving credit to Marsh for his work with Tony.

Not that it matters, but Cal in its official sports site Calbears.com does not count Runge as part of its 47 person Olympic contingent of 41 athletes and 8 staff. Pretty impressive even excluding Cierra who remains listed in the Cal record books.