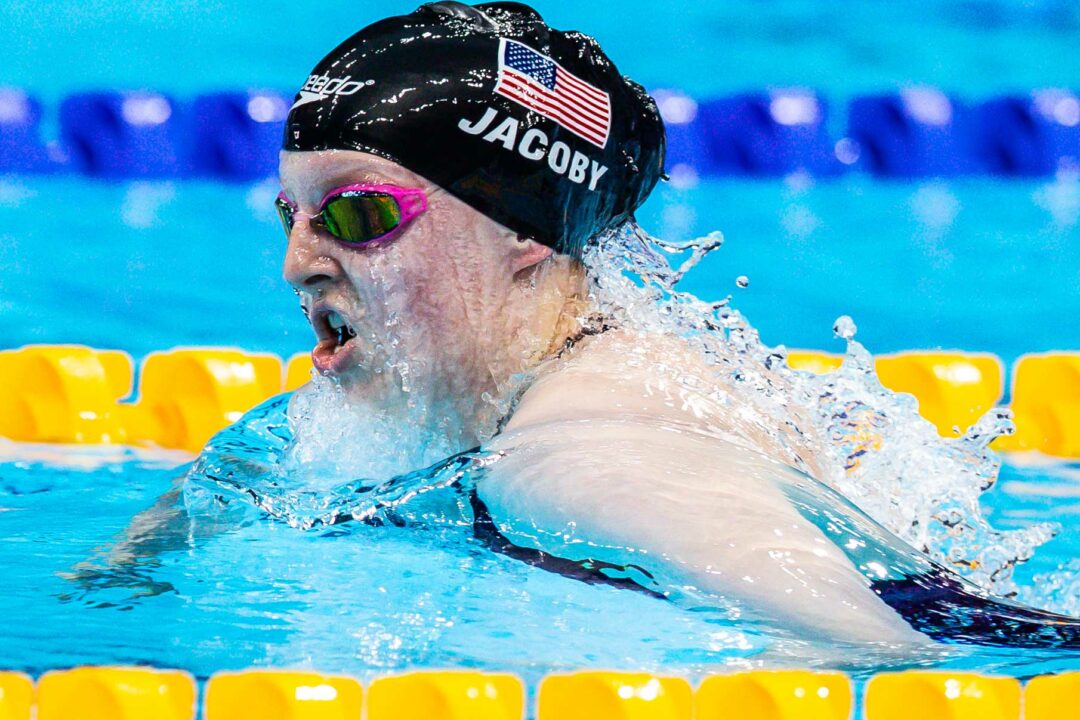 Gold medalist Lydia Jacoby, the first-ever Olympic swimmer from Alaska, is one of 38 nominees for the prestigious AAU Sullivan Award. Archive photo via Jack Spitser/Spitser Photography

Swimmers Caeleb Dressel, Lydia Jacoby, and Brad Snyder, and water polo player Maddie Musselman are among 38 athletes who have been named finalists for the 91st AAU Sullivan Award.

The award, which was established in 1930, was created to honor the organization’s founder James Edward Sullivan. It is awarded annually to “the most outstanding athlete in the United States.” While the AAU historically has been an organization comprised of amateur athletes, the word “amateur” has been dropped as the lines between amateur and professional athletes blurs. For example, Dressel last year made more than $300,000 in ISL prize money and salary, plus millions more in endorsements. When the award was founded, there was a more distinct line of amateurism – with only amateurs allowed to compete in the Olympics and in many of the major events in other sports like golf and tennis.

The AAU says that they have refocused their approach to just the ‘top athlete’ of the year in order to accommodate Olympic athletes, and now NCAA athletes, who are in many cases no longer amateurs.

The list of 38 athletes will be whittled down to 10 via a process that includes votes from both the media and fans, and one winner will be selected (though in some years there are two honorees).

Nominees are usually announced in April, but because of the ongoing COVID-19 pandemic, the process and ceremony have been delayed. The presentation of the award will be held at the Rosen Centre in Orlando, Florida on Friday, Oct 22, with a special recognition reception in conjunction with the Orlando Magic later that night.

He was a captain of the American men’s swim team in Tokyo, alongside Ryan Murphy, and won gold in every event he raced except for the mixed 400 medley relay, which placed 5th. He became the fifth swimmer in history to win 5 gold medals at a single Olympic Games. That included new World Records in the 100 fly (49.45) and as the fly leg of the men’s 400 medley relay.

Lydia Jacoby was one of the breakout stars of Team USA at the Olympics. The Alaskan, who became the first swimmer from her home state to qualify for the Olympic Games in swimming, built like a slow roar in the year leading up to the Tokyo Games. As she gradually began to swim more meets in the Lower 48, Jacoby’s presence in national conversations grew. At the Olympic Trials she finished 2nd behind the World Record holder and the defending Olympic champion Lilly King. In Tokyo, Jacoby improved that to a gold medal victory at only 17 years old.

Her story captured the hearts of Americans, given her story of traveling from the small town of Seward, Alaska to find a training pool 2 hours away in Anchorage during the pandemic. Even in the best of times, that pool in Anchorage is the only long course water in the state. It was an underdog story that had Jacoby bloom into the world’s best in front of a global spotlight.

37-year old Brad Snyder, who lost his eyesight from an IED explosion as a member of the US Navy in Afghanistan, competed in his 3rd Paralympic Games in 2020. While his first 7 Paralympic medals, including 5 golds, were won in swimming, in 2020 he added running and cycling to his repertoire and competed in the paratriathlon.

Along with his partner Greg Billington, Snyder won gold in the PTVI classification in Tokyo – his 6th Parlaympic gold medal overall.

The 23-year old Maddie Musselman, meanwhile, starred for the U.S. Olympic Women’s Water Polo Team in Tokyo. The American women roared their way to a gold medal in one of the most dominant performances in Olympic water polo history, including a 14-5 drubbing of Spain in the gold medal match.

Sadly the relevance and unimpeachability of the Sullivan Award has long since passed. In the last several years, the award decision has been largely controlled by a group of AAU Ohioans (including the late Ohioian and AAU CEO Roger Goudey who also happened to love volleyball). Which explains why in the past six years two female volleyball players (Lauren Carlini and Kathryn Plummer) and two Ohio State alums (Ezekiel Elliott and Kyle Snyder) have won the award, and perhaps why a decade-long professional like Simone Biles (born Columbus, Ohio and with a reported $6m in earnings in 2020) received yet another nomination for the award this year.
https://www.sportstravelmagazine.com/aau-leader-roger-goudy-passes-away-at-69/