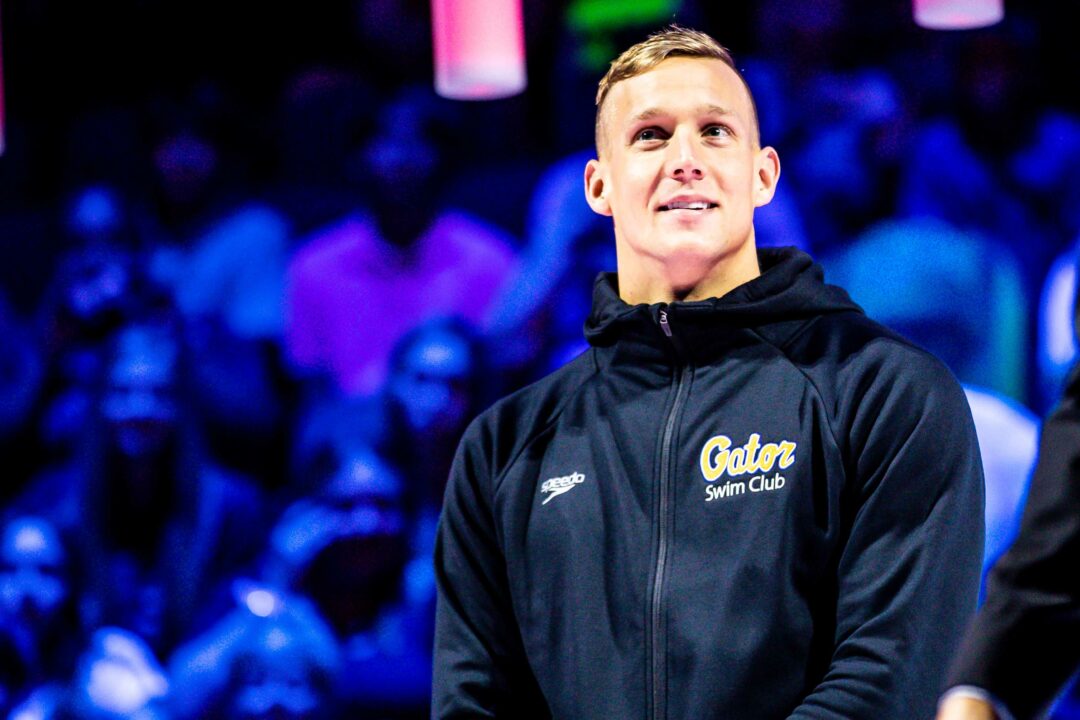 Dressel will move on from longtime coach Gregg Troy, who has led him to unparalleled success over the last seven years. Archive photo via Jack Spitser/Spitser Photography

Caeleb Dressel announced that he is making the move to train under coaches Anthony Nesty and Steve Jungbluth at the University of Florida on Tuesday, meaning he will no longer be under the tutelage of longtime head coach Gregg Troy.

“I am beyond grateful for this opportunity to be in this training environment with this very special, talented, and driven team,” Dressel wrote.

Dressel also acknowledged that he will still receive guidance from Troy as a “mentor, friend, and most importantly a role model forever in my life.”

“This man has taught me more than he will ever know in and out of the water.”

The move is a surprising one for Dressel given the fact that he’s coming off an immensely successful Tokyo Olympic campaign that saw him win five gold medals, including sweeping his individual races in the men’s 50 freestyle, 100 freestyle and 100 butterfly.

Dressel has been under the tutelage of Troy dating back to the fall of 2014 when he began his freshman year at the University of Florida.

Dressel won the NCAA title as a freshman in the 50 free in 2015, and would go on to have one of the most successful collegiate careers in recent memory, winning nine individual national titles and leading the Gators to a relay victory in 2018.

In the long course pool, Troy helped land Dressel on his first Olympic team in 2016, where he would win a pair of relay gold medals in the men’s 4×100 free and 4×100 medley.

Dressel subsequently exploded at the 2017 World Championships, winning seven gold medals, and then he added another six gold and two bronze at the 2019 Worlds, also breaking the world record in the men’s 100 butterfly.

After Dressel graduated from college in the Spring of 2018, Troy retired from coaching the college team at Florida and would turn his focus to exclusively training a group of pros that included Dressel.

As for Nesty, he is now the head coach of arguably the two most dominant swimmers on the planet. Seven-time Olympic champion Katie Ledecky announced that she was making the move from Stanford University to train under Nesty in Gainesville in late September.

Ledecky’s move came after she was somewhat stagnant in her progress of getting faster in recent years, though she still won two gold medals and a pair of silvers in Tokyo.

As for Dressel, given the success he’s had under Troy, this move likely indicates the 70-year-old is eyeing retirement.

Nesty was named the head coach of the University of Florida men’s team following Troy’s departure in 2018, and beginning this season, also coaches the women’s team after the programs were combined in April.

The 1988 Olympic gold medalist in the men’s 100 butterfly, Nesty made noise this summer as he led University of Florida swimmer Bobby Finke to double gold in the men’s 800 and 1500 freestyle events at the Tokyo Olympics. Nesty also coached fellow Gator Kieran Smith to a bronze medal performance in the men’s 400 free, a sixth-place finish in the 200 free, and a 1:44.74 lead-off on the men’s 800 free relay that made Smith the third-fastest American of all-time.

Jungbluth is currently in his 11th season as a member of the Gator coaching staff, including working as the sprint coach for eight years where he did work a lot of work with Dressel. Jungbluth was promoted to associate men’s head coach in July of 2018.

What I find to be amazing is just how many of you good folk can troll and divert a “Dressel thread”.
Well, alrighty then…

Unbelievable. What a punk. No loyalty.

Nesty is a great fit for him

Alright the UF pro group is dumb loaded. Very happy for both Nesty and Dressel.

Dressel should buy Troy an 80′ yacht!

Damn, who knew that Dressel wanted to race the 1500 against Bobby that badly. #builtdifferent #washedking #ledeckyimcomingafteryou

? Swimming news is where a guy moves over a few lanes .

Finke is on record saying he wants to race Dressel in a 25. What he left out is the 3000 right before that.

He’s pretty untouchable on the 100m fly and 50m free; it’s the 100m free where an upset could happen. It would be cool to see him train for the 200 IM. Out of the blue he pushed Seto hard at ISL.

He certainly didn’t look untouchable in the 100 fly in Tokyo.

CD also had a bad turn & a bad finish, otherwise as others have speculated too he would have been maybe 49.2.

He’s beatable in 100 fly only if Milak is in top form. Other swimmers are still far behind his level. While in 100 free, the whole field is getting closer. There are many potential challengers.

He’s beatable if Milak is in tip top form, has the race of his life again, and CD botches the crap out of his turn and finish like he did in Tokyo.

Nesty has a lot on his plate now, hope he can manage his own mental health and balance his family around this, hes got a lot of talent counting on him!

A direct result of nesty squeezing troy out of pool time

You are not wrong…

More on this, please.