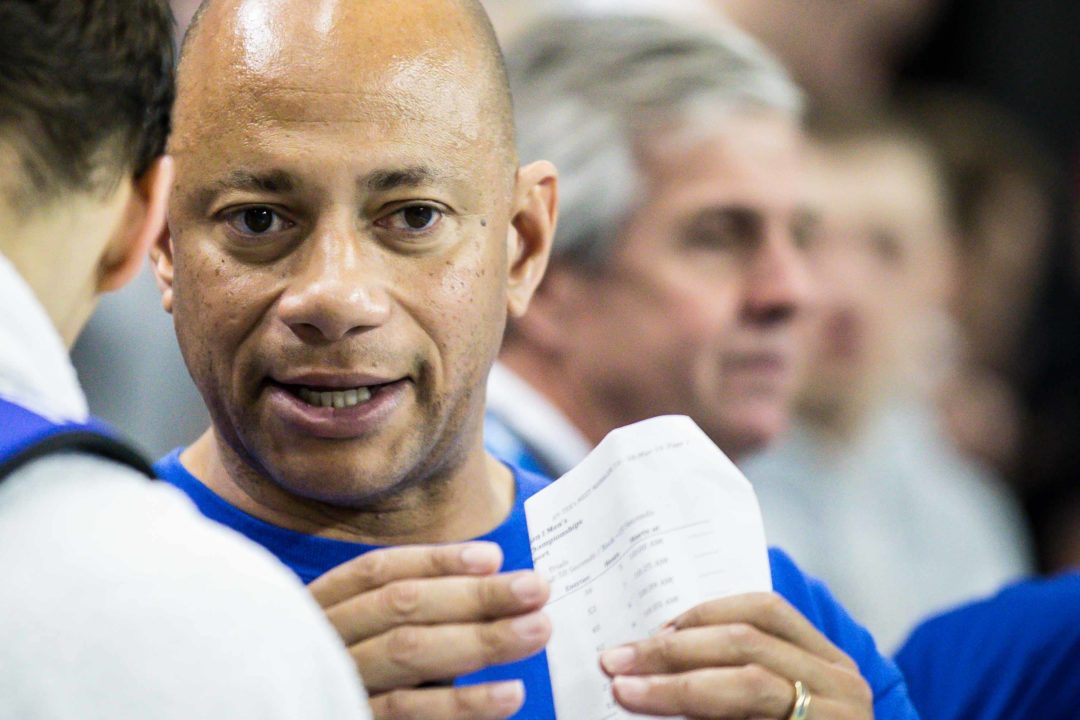 Nesty has spent the last three seasons as the Florida men’s head coach, and the Olympic champion and UF standout has been on the Florida staff for the last 23 years.

Florida was a combined program under longtime coach Gregg Troy, who retired from collegiate coaching in spring 2018 following the 2017-18 NCAA season. Following Troy’s departure, the program split, and former Florida associate head coaches Nesty and Poppell were tapped to lead the men’s and women’s programs as head coaches, respectively.

The Florida men and women each had several strong seasons since Troy’s departure.

Nesty helped the Florida men to a third-place finish at 2021 NCAAs, up from sixth in 2019 and fifth in 2018 (Caeleb Dressel‘s senior year). He’s continued the Florida men’s SEC dominance, extending their conference win streak through to 2021– no other team has won since 2013. The last couple of seasons, Kieran Smith and Bobby Finke have set American records, and the Gator men have been a national force, also excelling in sprints even after Dressel’s graduation.

Poppell, meanwhile, pushed the Florida women from a scoreless NCAAs in 2017, their first scoreless NCAAs in history, up to 17th place in 2021 with 84.5 points. Florida jumped from seventh at 2018 SECs, the season before Poppell took over the newly split women’s program, to SEC runners-up in 2019, 2020 and 2021.

With Florida becoming a combined program again, that leaves Texas A&M and Tennessee (unofficially, as Matt Kredich is the head coach of men and women but coaches dedicate their time mostly to either the men or women) as the only teams to split by gender in the SEC (Arkansas and Vanderbilt only have women’s teams.)

I am excited and honored to announce that I have been entrusted with not only the men's program but also the women's program now! #GoGators 🐊 pic.twitter.com/zKDcv9UGSd

Honestly, pretty awesome news from an academic view. My college team was combined (under the same coach), but we practiced separately. This gave you a little bit of leniency with classes. If you had a class conflict, important review session, or a club meeting that interfered with practice, you were able to make it up with the women’s (or men’s) practice.

Congratulations, Nesty! Nobody bleeds orange and blue more than him! Great decision by the A.D.

He had inside scoop of plans to combine & he wasn’t going to be offered. Just a guess

or he took a job/new opp he wanted and florida had to fill the opening? really think they would’ve fired him or asked him to step down in position and salary? lmfao

Or… they combined BECAUSE he left.

No no no, that makes too much sense

This is a bold move, considering the women didn’t score at NCAA’s the last time Nesty coached them. And a big slap in the face to Holly Bonewit-Cron, HBC should have been begged to take this job with no expenses spared to get her. She would take UF Women’s Swimming back to where it belongs, at the top of not only the SEC, but also the NCAA. Best of luck to Coach Nesty and the lady gators, maybe HBC would be humble enough to accept an Associate Head Coach or similar role directing the women’s team under Coach Nesty.

Who? And Nesty was in charge on the Men’s team.

Who? HBC? Amazing head coach of the Miami University Redhawks. Was on UF staff at some point. Brought along the Nova Southeastern program from nothing to a D2 powerhouse.

HBC is peaking at Miami. She goes thru assistants worse than Ray Looze.

Love the screen name to go with the reference.

She has had 2 assistants leave in the last 4 years. One left college coaching completely. She employs 3 assistants each year. So that’s 2/12 over 4 years. Stop spreading lies.

Not sure why all the downvotes. Nothing in this comment is incorrect

HBC has had success with the men at Miami but not with the women so far!

Bruh, this take is ICE COLD

bruh think about this

Sorry, but you just don’t know the back ground.

I wonder who they’ll bring on as an assistant though. That spot would still need to be filled.

Did I hear that Anthony’s daughter committed to the Gators this morning????? Congrats Coach Nesty.

Bro it’s a joke it’s not that deep.

Bro, I knew that. You fell for it.

Yo my bad bro

Asti has stepped down at Tennessee

What head coaching jobs are open right now that he may be looking at?

6
-1
Reply
SwimFani
Reply to  Top is too Rocky