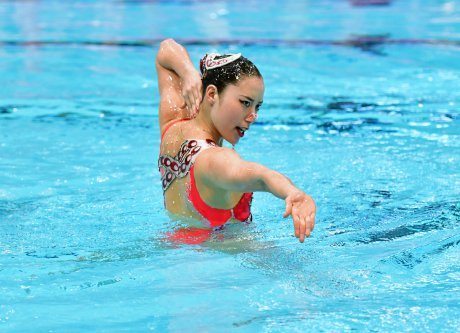 Inui told FINA, “This gold medal means a lot for me so I am very happy.” She said she is aiming to win another gold medal in her home country when the World Championships come to Fukuoka, Japan in 2023.

After winning two gold medals and one bronze so far, China is in the lead medal-wise for artistic swimming in Budapest. Twin sisters Liuyi Wang and Qianyi Wang won their first medal on Sunday in the women’s duet technical event. Qianyi was part of China’s silver medal-winning team performance at the Tokyo Olympics.

China kept their momentum going in Budapest by taking home gold in the women’s team technical on Tuesday.

Russia’s absence from the 2022 World Championships has had a huge impact on artistic swimming. FINA banned Russia and Belarus from Worlds this year due to the Russian invasion of Ukraine. At the 2019 World Championships in Gwanju, the Russian Federation competed in nine synchronized swimming events and swept gold medals in all of them. They didn’t compete in the women’s team highlight, where Ukraine won gold which was enough to place Ukraine in 2nd on the medal table.

Without the defending champions in Budapest, the five gold medals are now spread out between China, Japan, Ukraine, and Italy, making for a much more competitive medal race than usual.

Ukraine won the women’s team free combo to earn their first gold medal. Marta Fiedina, who won silver in the women’s solo technical, told FINA, “I’m so happy, I’m happy to be here in Budapest. And happy with my results because in the last Worlds I was fourth and now I’m second … I will try to show more in the free solo.” Fiedina helped Ukraine win two bronze medals at the Tokyo Olympics in the duet and team events.

Italy’s Giorgio Minisini and Lucrezia Ruggiero won the mixed duet technical event to help place their country in 4th on the medal table so far.

At least we’re winning something in Budapest