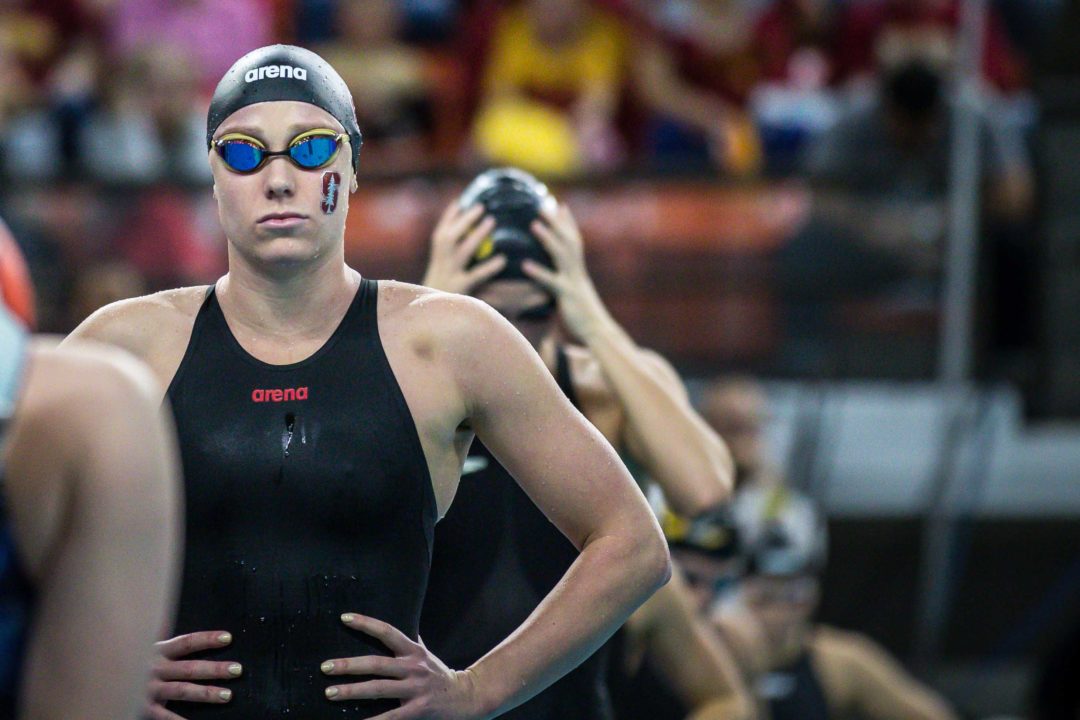 Over the past few seasons, the Stanford Cardinal women’s team has been an absolute juggernaut in college swimming. Two weeks ago, Stanford won its 3rd-straight NCAA title, and while the score was a bit closer than it was the previous two years, the Cardinal still had enough left in the tank to win their 11th overall championships, given them four more than other women’s NCAA team.

The Cardinal are led by Greg Meehan, who just completed his 7th season as Stanford’s head coach and who has already been named as the head coach for the USA’s 2020 women’s Olympic team. Stanford finished 8th at NCAAs Meehan’s first year, then took two 2nd-place and one 3rd-place finishes the next three years, leading into the current title streak. While Meehan’s teams have featured Olympians like Maya DiRado, Katie Ledecky, and Simone Manuel, they’ve also featured big contributions by some lesser-known swimmers. That was especially true this year when Stanford still won despite losing both Manuel and Ledecky.

BSN Sports Ambassador Jessica Hardy spoke with Coach Meehan to get his thoughts on a number of topics, ranging from his coaching philosophy to his favorite coaching memory.

When it comes to his coaching philosophy, Meehan’s key word is “educator.” In Meehan’s view, this means he and assistant coach Tracy Slusser really want to teach their swimmers not only about the sport of swimming, but about life too.

Being an educator in sense of in the sport, teaching what we do, what our foundation in our program is, but also being an educator in terms of them moving through four really important years of their life, and helping them on their path to the place they are going.

Part of educating swimmers about life is empowering athletes to become leaders in whatever they do later in life.

There is so much growth that happens in their career that I don’t think there’s strategies that fit for everybody. We have things that we do for our program, but everyone responds differently. Ultimately, we want them to be confident to take ownership in what they’re doing in their life. That happens after disappointment or failure, or a mistake, or whatever. So in each of those moments where growth can happen, we allow it to happen, but we talk about things. I am most proud of the athletes in our program that feel comfortable coming into our office and talking about whatever is going on in their lives. Health, relationship, academic, etc. Good relationships with an athlete allows us to help them more. Learning how each individual manages those moments, helping them over their hump, and then they’re prepared for the next phase of their lives. [We focus on] growing skill sit that they can utilize and continue to develop and build who they are as a person.

But for swimmers, leadership doesn’t have to wait until later in life. Meehan pointed to the impact that seniors have had during Stanford’s run as being crucial to the team’s chemistry. Over the last three years, swimmers like Ella Eastin, Janet Hu, and Lia Neal, who may not be quite as well known as Manuel and Ledecky (although Neal is an Olympian herself), have played an integral role in Stanford’s success.

We’ve been on a run of really good senior leadership. That is huge. It comes from the recruiting process of finding people that come in buy in to the culture of what’s been established. They get to be their own person, we have a bunch of unique individuals, but they all buy into the bigger piece because of our awesome senior leaders. That has been really important over last 6 years.

Being a hugely successful college and international-level coach doesn’t make someone immune from the challenges that other coaches face. If anything, it can amplify them, especially when it comes to finding balance between personal and professional responsibilities. “I’m not perfect, but it’s super important and it’s something I’m always trying to work on,” said Meehan as he talked about trying to make that balance work, especially now that he’s responsible for preparing Team USA for the Olympics, which are coming up quickly.

Still, it’s undoubtedly worth it for someone who has coached swimmers not only to NCAA titles but also to Olympic gold medals. And while Meehan has plenty of memories from which to choose, he identified a couple moments from the 2016 Rio Olympics as his favorites so far.

The two moments in Rio with Simone wining the 100 free gold and Maya winning gold in the 200 back. Those were two of the most iconic moments of the Games…With Lia, Maya, collectively Stanford being able to celebrate what that meant on a much bigger scale for the sport of swimming. And for Maya to win the last race of her career was really neat.

With one eye on Tokyo and another on next year’s NCAA championships, the Stanford Cardinal are sure to be a power in the swimming world, both on the college and international levels, for years to come.