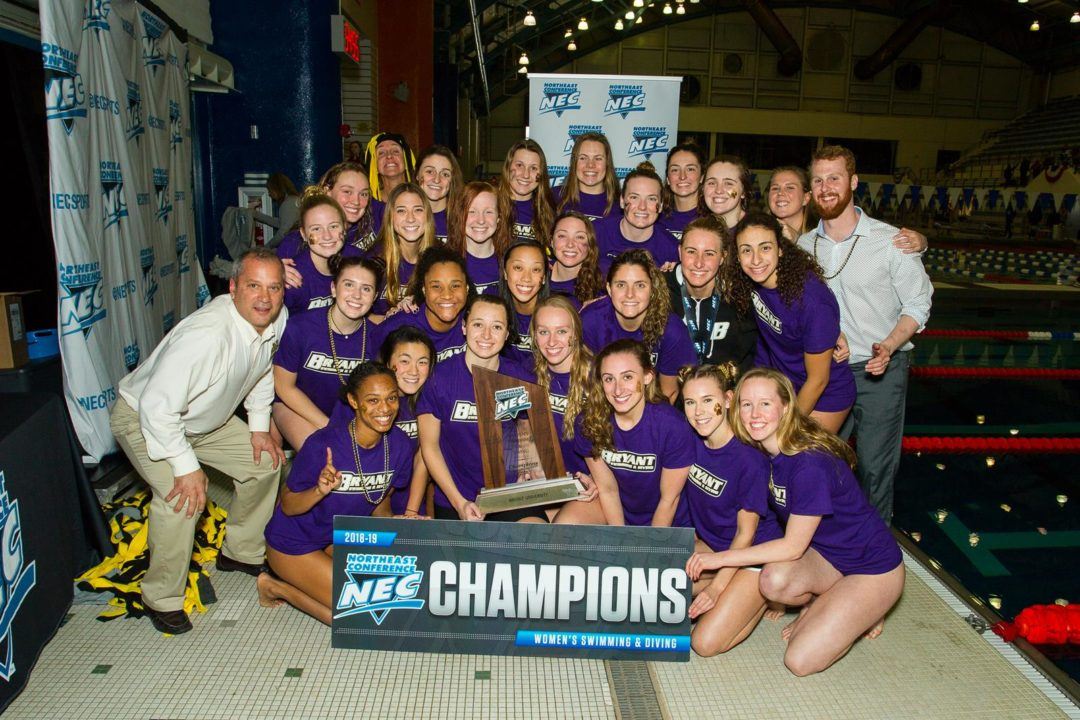 Bryant senior Jillian Rice was named the Swimmer of the Meet after winning the 50, 100, and 200 yard freestyles. Current photo via Northeast Conference

On the final day of the NEC Championships, the Bryant U women won 4 of 6 events. Their 400 free relay win not only capped off their dominant performance to defend their 2018 title, but was also the only meet record of the day.

For her efforts, Bryant senior Jillian Rice was named the 2019 NEC Swimmer of the Meet after sweeping the 50, 100, and 200 freestyles. Bryant’s swimming coach Katie Cameron & diving coach Jerry Cummiskey were named the conference coaches of the year as well.

Wagner freshman Ellie Eastwood was awarded Rookie of the Meet after becoming the first freshman victor in the 400 IM on Friday. Wagner’s Adrianna Warning won Outstanding Diver of the Meet after winning the 3-meter and placing 2nd on the 1-meter. The NEC doesn’t dive platform at its conference championship meet.

The session kicked off with Saint Francis’ Ana Pa Montes Deoca Zapiain winning the 1650 free by almost a whole 25 with a 17:00.91. Taking second place and chipping a whole minute off her seed time was Sacred Heart’s Margaret Flaherty (17:16.60). Bryant U swimmer Alyssa Difiore clinched her third top three finish with a 17:21.34.

Bryant U’s Jillian Rice went 3-for-3 this weekend as she closed her senior year with a win in the 100 free with a 50.21 to defend her 2018 title. Jeanette King of Central finished a half second behind Rice with a 50.86.

In the final event of the meet, the Bryant U relay of Rivera, Scifo, Alyvia Beaudion, and Rice won with a new NEC meet record of 3:23.72.

In the last 50 of the race, Simona Visinski passed up Saint Francis’ Katelyn O’Connor to finish in second for the Central relay (3:26.42) and locked in their runner-up team finish. Saint Francis finished third with a 3:26.97 and capped their third place team finish as well.