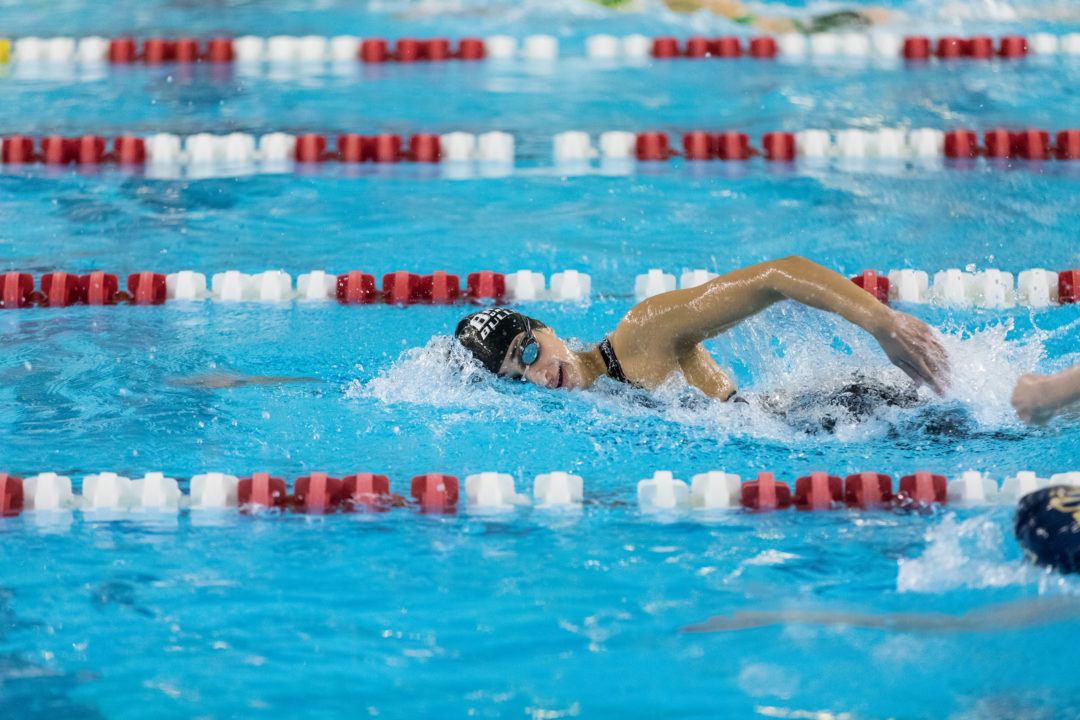 Alyssa Difiore (above) and the Bryant University women broke a Conference Record in the 800 free relay. Current photo via Frank Poulin Photography

While their men’s team was swimming at the opening day of the MAAC Championships, the Bryant University women tore up the first day of the Northeast Conference Championships in East Meadow, New York.

The defending champions swept the meet’s opening day, including setting a new Meet Record (by almost a second) in the session-wrapping 800 free relay.

Fast forwarding to that 800 free relay, the Bryant women combined for a 7:21.70. That broke their own Meet Record set last season at 7:22.53. 3 of the 4 swimmers from that relay returned this season, with Elin Svard joining the group this year.

The relay’s leadoff, Alaina Scifo, split exactly the same time ass last season. Alyssa Difiore dropped half-a-second, while Jillian Rice added a second, but the difference-maker was Swedish sophomore Elin Svard. She was over a second better than the swimmer she replaced on the relay (Watson graduated).

This year, the conference moved 1-meter diving to day 1 of the meet (it was day 2 last year), and that helped Bryant earn an even bigger lead. The conference’s dominant diver last season, Annemarie Durham from CCSU, graduated, which leaves Bryant almost unchecked at the top of the diving group. Kelci Abernathy won with a score of 238.40, leading a 1-3-4-5-6 finish for Bryant: good for 78 points.

Bryant is good enough in the swimming portion of the meet alone to probably win; but with their dominant divers, their lead is becoming nearly-insurmountable already after just 1 day of competition.