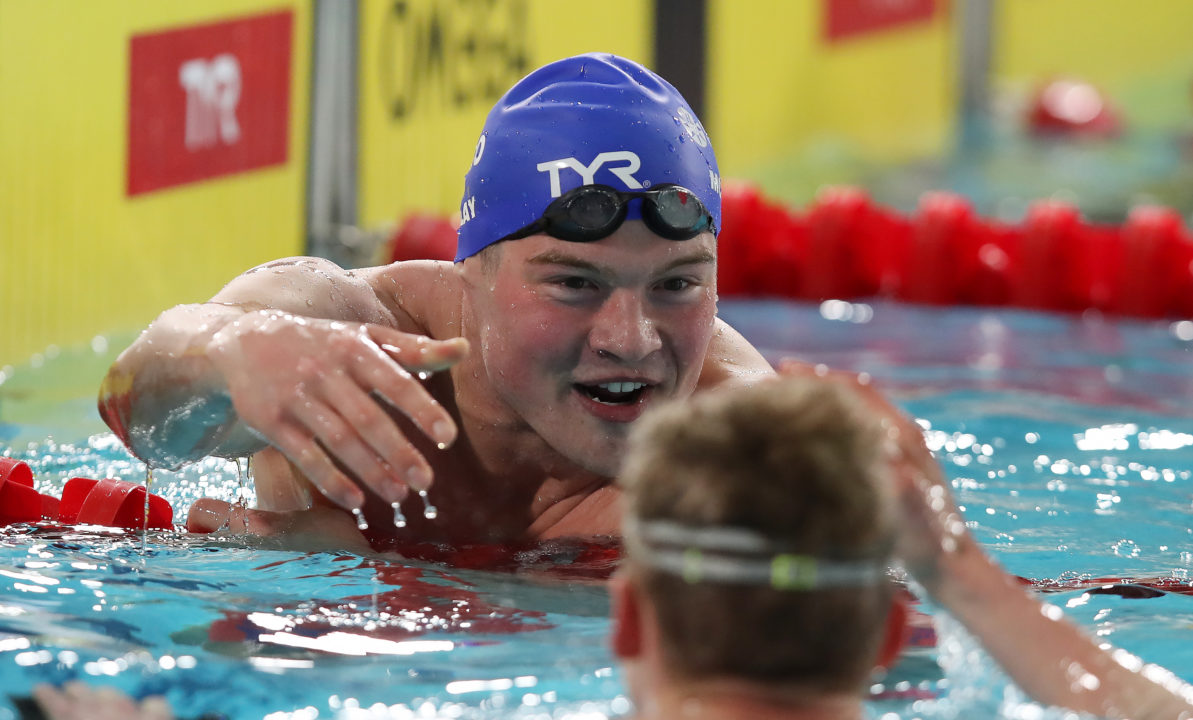 Originally slated for April 14th – April 19th at London Aquatics Centre, the championships were among many elite international meets either postponed or cancelled outright due to the global pandemic that ultimately rendered this year’s Summer Olympic Games postponed to July 2021.

With just under 250 days to go until Tokyo, British Swimming has now revealed its new dates for the British Swimming Championships, which will stay at the London Aquatics Centre at Queen Elizabeth Olympic Park.

The new dates for the British Swimming Championships are now April 13th – April 18th. This leaves just a handful of months for swimmers to prepare, including those in England and Scotland who have been experiencing on-again/off-again pool closures and societal lockdowns.

“British Swimming shares the concerns of the whole aquatics community during the current lockdowns and we are aware of the pressure on swimmers, coaches and clubs across the UK,” read the British Swimming statement announcing these new championships dates.

“As an organisation we are very sensitive to the frustrations the community is feeling alongside the challenges of being out of the water for so long. At the same time, we all thrive on competition and believe it is important to give our swimmers the opportunity now to focus their attentions on competing in our premier event in such an iconic location.”

To enable more athletes to compete at the event at both the junior and senior level, the British Swimming Championships will include a 2nd session of heats each day.

“Qualifying times will be pitched accordingly and the ‘window’ during which these times need to be achieved backdated significantly to 1st March 2019. Further information on the entry standards and wider meet conditions will be published in December.”

Commenting on the announcement, British Swimming’s Chief Executive, Jack Buckner, said, “We are delighted to make this announcement today and give the aquatics community a major event to look forward to. Whilst we, as a country, still have a long way to go to beat the pandemic, we have to be optimistic that by April we can return to sport as we know it.

“Over the years this event has put on quite the spectacle, and bringing the event to London, as we planned to do in April 2020, will only add to the sense of occasion and excitement. I’d also like to take this opportunity to thank our partners in the capital for supporting our plans.”

Performance Director, Chris Spice, said, “After more than six months of disruption, it is vital that we give our athletes something to focus on, and what could be better than a British Championships in London. Our elite swimmers are back working hard at our designated training centres across the UK and we’re keeping everything crossed that club programmes will be able to have some consistency leading into these Championships.

“We also fully understand the difficulties of qualification for these Championships and along with our Home National colleagues, and with GLL and LLDC, our partners in London, we are working hard to be as inclusive as possible given the ongoing disruption to club training environments.

“Whilst this is good news for the sport, we must remain vigilant and follow the government guidelines that are in place. If we can do that, as a country and as a sporting sector, then I’m confident we can witness a fantastic celebration of swimming in April.”

These athletes will be nominated for selection to the BOA at the same time of the publishing of the new policy, which we are still awaiting at this time.

They were always going to have a 2nd heat’s session even in 2020. They relaxed the senior qualifying times so more swimmers could enter and they could afford to host it at the Olympic pool. It’s not cheap to host meets in the London pool unfortunately. Now the are coming out with a different reason so they can justify the increase in numbers.

Hopefully the anti-vaxxers stay in their caves, otherwise I am not sure London will be allowed to be hosting indoor events with upwards of 1000 people in only about 20 weeks time. Everyone here in the UK is anticipating another national lockdown in January/February so sadly the “elites” (ie British Swimming’s little favs as the list certainly isn’t based on anything sensible like National/World Rankings) could well be the only ones fit enough to be racing in April anyway.