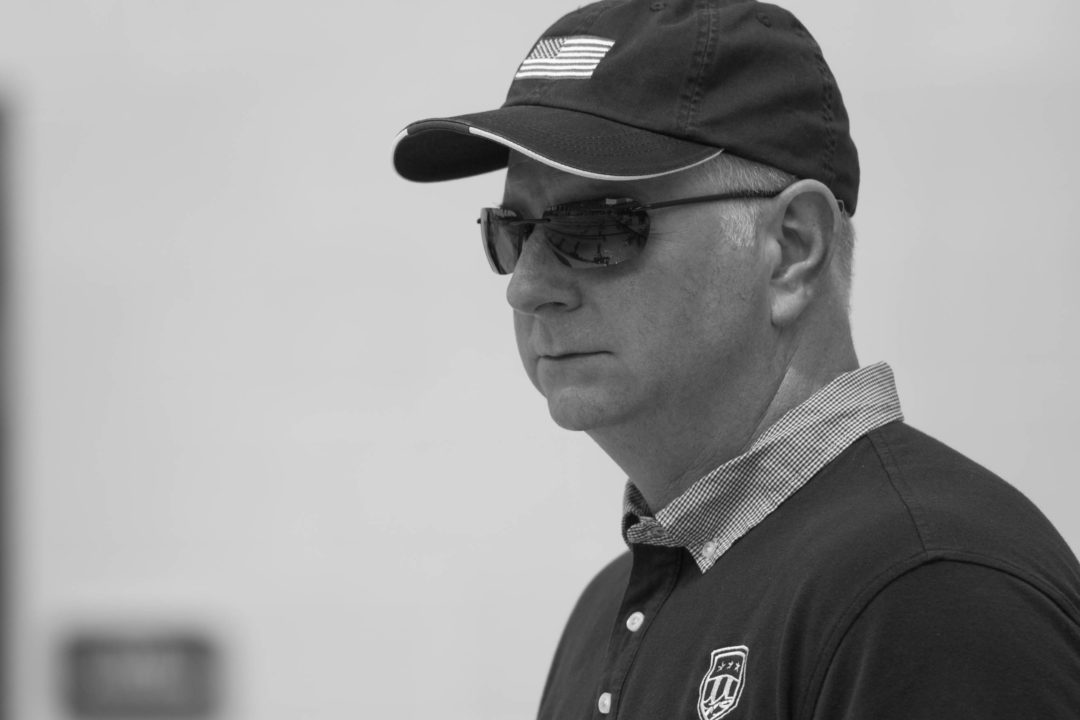 It’s not that Bob Bowman failed at Michigan. The coach who, in 2004, was known for mentoring the teenager who was... Stock photo via Mike Lewis/Ola Vista Photography

It’s not that Bob Bowman failed at Michigan. The coach who, in 2004, was known for mentoring the teenager who was in the process of building the greatest legacy in the sport of all time, inherited a winning program. Jon Urbanchek’s Wolverines lost only four times in duals to Big Ten opponents during his 22 years in Ann Arbor. They claimed conference titles an astounding ten years in a row, owning the Big Ten from 1986 to 1995, culminating in an NCAA title in 1995. Additionally, 26 of Urbanchek’s swimmers represented their respective countries at the Olympic level, resulting in 17 medals (7 were golds). He would go on to be inducted into the International Swimming Hall of Fame in 2008.

Under Bowman’s four seasons, the Wolverines touched 3rd in the Big Ten twice, 2nd once, and 1st once. On the national level, their highest finish was 6th in 2005 and 2008. Those were pretty solid results– but compared to Urbanchek, and considering he was Michael Phelps’ coach, they weren’t enough to validate that Bowman was, in fact, a good fit in the NCAA. Bowman could not quite return Michigan to the team it was during Urbanchek’s golden days, though they didn’t fall off much either. He retained, but did not reform or renovate. Unable to crack the top 5 nationally, Bowman couldn’t take the Wolverines to new heights in the 21st century.

This time around, however, Bowman has a clean slate in Tempe, and he’s shown thus far that things will be different at Arizona State. Despite plenty of speculation that he would not be successful as he plunged back into the college swimming sphere, Bowman has put forth a very promising start to his second season with the Sun Devils. Fast swimming has been primarily centered on the men’s team, their success recently culminating in a men’s team win at the 2016 Art Adamson Invitational. Notably, the men improved from a 5th place finish last year to 1st, while their women jumped from 8th to 4th this past weekend.

“I’m very proud of both teams this weekend,” said Bowman in an ASU press release after the meet. “We are light years ahead of where we were last year in team culture and spirit and this is showing in our performances.”

For the men this past weekend, senior Richard Bohus broke two school records, taking down his own 100 back and 200 back marks with times of 46.00 and 1:41.83, respectively, while junior Patrick Park took the 200 fly title (1:44.00). With the additions of Thibaut Capitaine and ‘Zona graduate student transfer Andrew Porter, who both sat out last season, the Sun Devil men suddenly have an array of experienced stroke specialists who will crash A finals at the Pac-12 level and threaten to score nationally. But every coach knows that seniors graduate, which is why Bowman has already planted the seeds for a bright future.

Joining the ASU roster in a somewhat quiet manner, as the swimming world focused largely on rookies like Florida’s Maxime Rooney and Stanford’s Grant Shoults, Craig has been absolutely vital to ASU’s success thus far in the season. At the Art Adamson Invitational, Craig won both the 200 free (1:34.57) and the 200 IM (1:45.24) while touching 2nd in the 100 free (43.44). He garnered best times in all three and put up the #2 time in ASU history in the both 200’s. He’s undergone a complete overhaul with his sprint freestyle under Bowman’s oversight in Tempe, adding huge new personal bests in addition to splitting a wicked fast 42.28 on the end of ASU’s program record-setting 400 medley relay and a 19.70 to anchor their 200 free relay. Freshmen Ben Olszewski, Zachary Poti, and Joe Molinari each provided A-final scoring in at least one event, as well, adding to the rookie foundation that Bowman will be working with after they lose contributors like Bohus and Barkley Perry to graduation.

The impressive first recruiting class extends to the women’s team, as well. They have further to go in terms of team depth and national scoring salience, but they have shown marked improvement from last year, and have more numbers with a large freshman class. Youth is key for the women’s team especially; while the men have 11 seniors and two grad students, the women have just five senior and a combined six sophomores and juniors. The ASU men brought in 12 new faces, and the women 9. Chloe Isleta was the first big-time pickup by Bowman– she’s incredibly versatile (53.5/1:56.3 back, 1:03.4 breast, 54.0 fly, 1:58/4:14 IM), and a 2016 Olympic Trials qualifier in both IM’s. There isn’t anything immediately flashy with the women’s freshman class, but they’re full of sprint freestylers and boast improving breaststroker Emily Glinecke; breaststroke seems to be an aspect where many top programs fall short.

“With the response we’ve gotten in recruiting, I think you will see steady improvement but I don’t know how long it’s going to take,” Bowman said in an October 18th press release. “We get disappointed when people turn us down, and I get really disappointed, but now people are turning us down to go to Texas or Cal. ASU wasn’t even in the conversation with any of the top 10 teams before I got here. Now we’re going down to the wire with the No. 1, No. 2 and No. 3 teams in the nation for these kids. That feels good.”

Emma Nordin, two-time defending Indiana HS Champ, is one of several big pickups for the ASU class of 2021.

With his upperclassmen swimming fast, Bowman has successfully brought in a freshman class that has lots of numbers, and especially on the men’s side, will ensure that ASU remains salient on the national level. The Sun Devil women, while they are still in full rebuild mode, won’t have to wait much longer for a significant shot in the arm. A look to next year’s incoming class suggests immediate additions in team depth and significant scoring opportunity on both sides, with six men and seven women already verbally committed to the team. Highlighting the stacked women’s class is freestyler Emma Nordin of the esteemed Carmel Swim Club along with sub-2:00 LCM 200 freestyler Erica Laning. For the men, Ohio freestyler Grant House leads the way, yet another dynamic 200 freestyler.

Say what you will about Bowman’s abilities in the college environment, but it’s clear that his team has come a long way in a short amount of time. There are certainly plenty of kinks to work out– the women lack relay salience and need more solid team members, while the men need more depth to crack into the next tier of teams, but let’s not forget that NC State wasn’t built in a day. Even as the Wolfpack careens toward the top of the NCAA, their women took a couple of years to start bringing in high-caliber recruits, and both teams are still striving to improve. It’s a process. Bowman spent years working with Phelps, coaching in the world’s spotlight with a much different schedule and different goals. In his second season back in the college swimming landscape, he’s already propelled his program out of the hole they were in before he got to Tempe, and signs indicate that the Sun Devils are on the rise for the first time in a long time.

Yep no doubt about it. He can coach! Best wishes Bob on your successful run at ASU!

Agree with the men…the women, not so much!

The women have a solid recruiting class coming in, so they too are on the rise.

Still not so much, Weirdo?

only one of those girls have times to qualify for NCAA’s so yes still.

I wonder if he was maybe a little preoccupied with Phelps back when he coached at Michigan? No Phelps here to focus on so he can solely focus on the team.

While ASU performed well at this year’s Art Adamson Invitational, it’s unfair to compare team results from year to year as different teams attend the meet each year. Notably on the women’s side, Stanford attended last year but not this year.

When you have better swimmers you have better results. No secret. If you can recruit some of the best US juniors it’s easier to do well. Not the case at ASU yet but there’s at least one big talent with Cameron Craig.
Great sprint talent.
But maybe he wants to transform him into an IMer….
Hopefully not.

Right on! It is all about recruiting. Wonder how much Phelps is actually ‘assistant coaching’ or is that for show…..and recruiting?

I think it’s too early to say that it’s just recruiting. Lots of swimmers having great in season times, and returning swimmers swimming faster than they were at this time last year. Time will tell whether this translates to success at PAC 12’s and NCAA’s, but at this point in the season it seems like the kids are buying into Bowman’s program and it’s more than good recruiting.

Used to swim with Craig, the kid can excel at what he puts his mind to. His IM dropped at an alarming rate his senior year, he’s a wildcard.

Yeah I remember when Bowman tried to turn that one young flyer into an IMer. HUGE disaster. Now the kid’s on TV selling laptops with the guy from the Big Bang Theory. Should have just stuck to butterfly! 😉

3
0
Reply
sven
Reply to  He Gets It Done Again

Plus, he’s a sprinter, and we all know they can’t do any stroke but freestyle. Just like Dressel doing breaststroke last year ruined all of his potential.

His best recruiting tool will be Craig’s performance in March

I think the author is unaware that Bob and Jon coached much together though ’08… during an era of Spann, Davis Tarwater, Scott Flowers, C. Houchen, Chris DeJong, Klutus, AVK, PVK, its not true to say Bob did take the Wolverines to new heights. At the NCAA level, he didn’t automatically get them there in 4 years… But it would be insane to say that the Wolverine presence at OT, Nationals, or the international stage was not recognized…