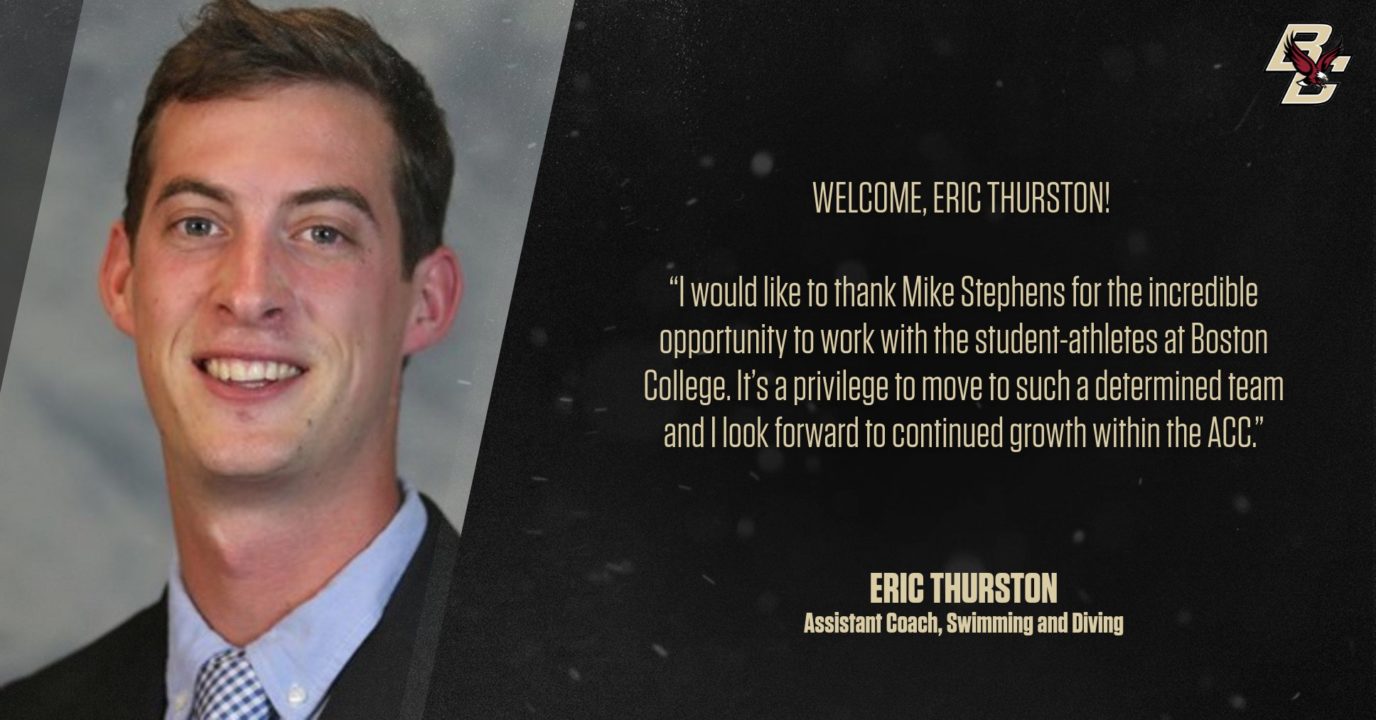 Eric Thurston spent the last 2 seasons as a volunteer assistant with the University of Virginia. He'll now join the staff at ACC foes BC. Current photo via BC Athletics

NC State’s Coleman Stewart swam a 44.0 to break his own ACC Championship Record in one of the fastest 100 back finals in NCAA conference meet history.

Boston College has hired Eric Thurston as the newest assistant on its men’s and women’s swimming & diving staffs. He replaces Dan Kelly, who recently completed his MBA and will be leaving the program in coming weeks to pursue a career in marketing and brand management.

Thurston comes from Virginia, where he spent the last 2 seasons as a volunteer assistant. This continues a trend over the last 5 years of ACC programs looking internally within the conference for new coaching hires.

Thurston joins the Eagles after two seasons as a volunteer assistant coach at the University of Virginia, helping the women’s team win an ACC Championship in 2018.

“I would like to thank head coach Mike Stephens and the administration at Boston College for the incredible opportunity to work with the student-athletes at Boston College,” Thurston said. “It’s a privilege to move to a determined team and look forward to continued growth within the ACC.”

At UVA, Thurston worked with the distance group, helping to develop dryland practices and improve flexibility, mobility and strength in the student-athletes. During his time with the Cavaliers, there were 45 ACC medalist performances, three NCAA championship top-10 finishes, 15 school records and 48 All-American performances. Thurston also aided the coaching staff in analyzing swimmer technique while serving as the team’s videographer during the season. Additionally, he served as an assistant coach of the Virginia Gators Swim Club.

“I am thrilled to welcome Eric to our staff,” said Stephens. “Eric joins us at an exciting time for our program following a wildly successful season which saw 37 record-breaking performances, and just before the opening of our new 14-lane aquatic center. His passion and energy have been evident since the very beginning of the search process, and I am confident that his coaching experience and ability to connect with our student-athletes will help lead our team to new heights.”

Prior to Virginia, Thurston served as an assistant coach at Brandeis from 2015-17. Thurston helped to oversee the sprinters, who set 17 school records during his tenure. In addition to practice, he aided the Judges in recruiting and fundraising. He was also a graduate assistant coach at South Dakota during the 2014-15 season. Thurston began his coaching career with the Kingfish Rhode Island club. He coached a variety of age groups, ranging from master level swimmers to under-8 swimmers.

As a collegiate swimmer, Thurston as a four-year letter winner and six-time NEISDA champion at Roger Williams University. He is the former school record holder in the 100 and 200-meter breaststroke and the 200 and 400-meter medley relays.

Thurston graduated with a degree in Classis from Roger Williams in 2014. He went on to receive his Master’s in Sport Management from the University of South Dakota in 2015.

“I am forever grateful for the student-athletes and coaches I’ve been able to work with and learn from to get me to the Heights,” said Thurston.

BC is a program on the rise. Mike Stephens has done a terrific job with no scholarships.

I agree! Mike’s passion and focus on the development of each kid at BC is fantastic. I also like the hire of Eric Thurston. He is a great educator and role model.

Vote Up5-1Vote Down Reply
Baldwin in a speedo

Interesting no mention of Matthew Denave and his continued contributions to BC’s performance over the past couple seasons. His 200 fly will hopefully become unstoppable under Eric and Mike’s supervision (not even his focus event!)

I don’t find it all that interesting.

@BaldwinInASpeedo I guess I really have to start swimming faster if this joke is going to stay alive. Sheesh