Boki, Rivard Gear Up For Second Wins At Day 2 Prelims of IPC Euros 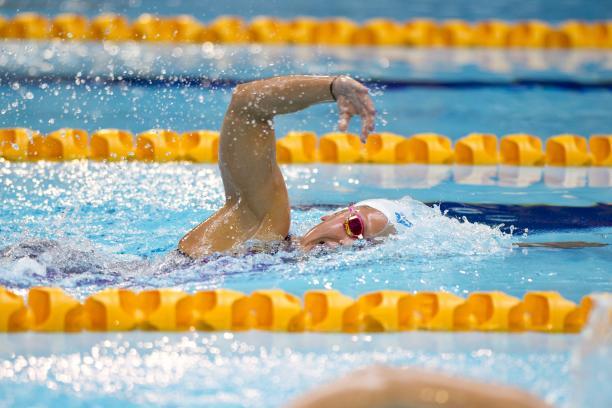 A series of swimmers are in pole position to take their second gold medal in as many days after qualifying fastest in the heats on day two (Monday, 2 May) at the 2016 IPC Swimming European Open Championships in Funchal, Portugal. Current photo via IPC Swimming/Luc Percival Photography

A series of swimmers are in pole position to take their second gold medal in as many days after qualifying fastest in the heats on day two (Monday, 2 May) at the 2016 IPC Swimming European Open Championships in Funchal, Portugal.

Norway’s world and European champion Sarah Louise Rung (3:26.97) qualified fastest in the women’s 200m individual medley SM5, but was not entirely satisfied with her swim.

“I’m happy with being first but so many things went wrong in that race! The good side is that I have a lot to improve for this evening races and I know I’ll do better.”

Belarusian Paralympic, world and European gold medallist Ihar Boki (23.58) picked up his first gold of the meet on Sunday (1 May), and will now go for the win as the quickest from the men’s 50m freestyleS13 heats.

There was an Asian record for Uzbekistan’s Shokhasanamkhon Toshpulatova (28.19) with her third place qualifying time in the women’s 50m freestyle S13.

Hoping for her first gold is Ukraine’s Anna Stetsenko (28.05), who was first ahead of Russia’s world and European title holder Anna Krivshina (28.14).

Five other Ukrainian athletes went through as the fastest in their heats.

Paralympic, world and European champion and world record holder Maksym Veraksa (24.04) is the favourite for the men’s 50m freestyle S12 as the fastest qualifier. Azerbaijan’s Dzmitry Salei (24.32) will be hoping to improve on his silver medal from 2014 in second place alongside teammate Raman Salei (24.65) in third.

World and European title holder Dmytro Vynohradets (45.97) looks good to defend his gold from 2014 as the quickest in the men’s 50m freestyle S3.

Rounding off an excellent performance from Ukraine was the women’s 100m backstroke S11 bronze medallist from 2014, Maryna Piddubna (1:21.05). The 17-year-old leads Germany’s Daniela Schulte (1:23.35) and Italian European champion Cecilia Camellini (1:24.65) into the final.

“I’m quite happy,” Rodrigues said. “It wasn’t as fast as I wanted but I’m saving myself for the final.”

“It was exciting. I am happy about being in the final and I think I can swim better,” Biskup said. “I think I can win.”

“I loved that race because I was giggling before I got in and I’m still giggling after,” Millward said. “I love being here in Madeira, it’s wonderful. I’m having a fantastic Europeans.”

Millward’s teammate Susannah Rodgers (37.00) will defend her women’s 50m butterfly S7 title as the fastest qualifier, as will another Brit Oliver Hynd (4:40.83) in the men’s 400m freestyle S8.

“Obviously it’s just about getting through to the final so I’ll go back and prepare and hopefully I can swim better tonight,” Hynd said. “I just wanted to stick to my own race plan and what I wanted to do going in, and I did that so I’m happy.”