Blueseventy Swim of the Week: Conger Setting Up For Relay Heroics 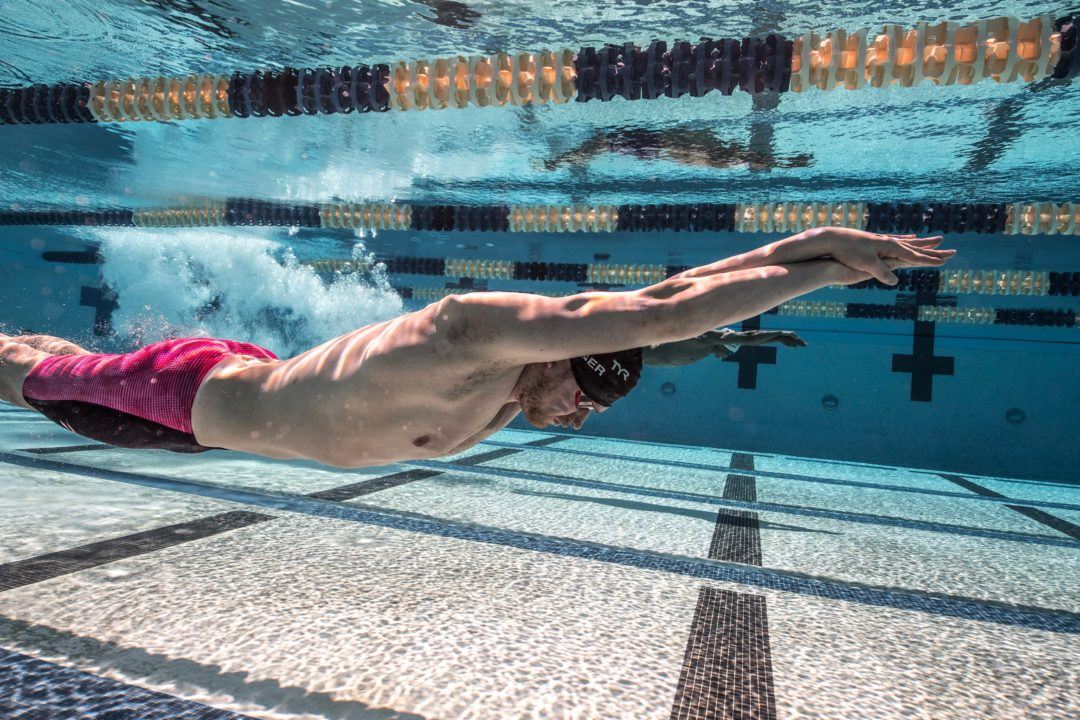 U.S. Nationals don't start until next week, but did you know that Pan Pacs and World Championships qualifying is already underway? Archive photo via Mike Lewis/Ola Vista Photography

U.S. Nationals don’t start until next week, but did you know that Pan Pacs and World Championships qualifying is already underway?

That’s not exactly true, of course. No matter what times have been done in-season, official roster spots for 2018 Pan Pacs and 2018 Worlds (along with three other major international meets) are selected solely based on results from Nationals. However, for swimmers who do grab a roster spot, relay entries (and secondary event entries) could be affected by big swims already put up this season.

Take Jack Conger, for example. The Texas pro blasted a new personal best in the 100 free over the weekend, going 48.76 to chop several hundredths off his career-best. Conger has already lowered his best time this season, going 48.80 in Atlanta in March after previously holding a best time of 49.02. But Conger rarely swims that event at his main taper and shave meet. The last time he did so was 2015, when he raced the event at both World University Games and U.S. Nationals. Lately, he’s seen his lineup more slanted to the 100 and 200 butterflys with a side of 200 free, the event in which he earned his first Olympic berth in 2016.

Here’s the issue for a swimmer as versatile as Conger: he’s got several great shots to make the Pan Pacs and World Championships teams… but in so many varying events that his Nationals (and potentially Pan Pacs) lineup might be overcrowded. The biggest conflict at Nationals is on day 1, when Conger’s 200 fly (where he’s the defending national champion) is back-to-back with the 100 free, which is a great opportunity for Conger to expand his medal count as part of the American 4×100 free relay. The events are also back-to-back at Pan Pacs, meaning Conger can’t go after his 200 fly in Irvine and then focus on grabbing a Worlds relay spot in the 100 at Pan Pacs, or vice versa.

That’s where the unofficial early qualification comes into play. There’s precedent for Team USA using swimmers on relays who didn’t technically qualify, but proved their speed outside of the qualifying meet. In fact, last summer, Conger struggled enough in his individual 200 free to miss the World Championships team in that event. But he time trialed well enough to ultimately make the finals relay at Worlds, earning himself a bronze medal. Conger has been hurt by this phenomenon too, though. One year earlier, Conger was bumped off the finals 4×200 free relay despite putting up the fastest split of any American in prelims. (Of course, Conger was bumped from the relay for two guys named Phelps and Lochte, who have somewhat proven themselves on the international stage, so it was hard to argue with the decision).

All that is to say that Conger now has an avenue to contend for both the 200 fly and the 4×100 free relay at either Pan Pacs or Worlds. His 48.76 shows that he’s continuing to improve in that event. And his track record suggests he’ll be far, far faster on a relay, as Conger has a storied tradition of big relay swims compared to his individual times in those events. Here’s just three major examples:

Nationals now looks much more open for Conger, with no necessary doubles. He can swim 200 fly on day 1, 200 free on day 2 and 100 fly on day 3, with two more days left to time trial another 100 free if he wishes. With the battle for the 4×100 relay spots looking more and more intense this season, Conger may have won the battle before official qualifying even began.

Given what he’s done at big meets in relay splits before, I’d trust Jack Conger with a relay anchor more that probably any active American male besides Dressel. Probably more than Adrian right now.

*BTW, I am not saying I don’t think Adrian is capable of a great split or that he’s fallen off a performance cliff or anything, I just think Conger is headed toward his peak.

He’s a monster relay swimmer, for sure. If his fly comes along to where he’s in the 50.mid range (which looks likely) I’d say you could put him on the fly interchangeably with Dressel because he will split in the 49s. Adrian’s gonna have to have a bad season or two before I say I trust Conger more on anchor, though. Conger may pass him up one day soon, but Adrian’s just been so consistently great that I think he’s still gonna be the best choice for this year.

Either way, I’m super excited to see what happens with the 100 free/4×100 free relay this year. American male sprinting is booming right now and I love it.

Lot can happen between now and 2020. Interested to see how fast Jack goes next week and then at PanPacs. He’s had some monster swims for sure in 2018

What has Adrian done to lose your trust besides have the fastest time by an American this year and swim relay splits of 47.0, 47.2 and 47.5 last summer. And a flat start of 47.8 to win silver?

He is getting older. But until someone proves they deserve that spot by actually swimming faster than him, you don’t remove him.

I’m a conger fanboy, for the record.

Yes. This. And given what Dressel did last summer — and the :42 fly he did in yards — It’s actually not absurd to think he could provide a :48-high fly split. A medley back half of Dressel-Adrian looks pretty darn good. Especially with a back-in-form Murphy leading off.

Wilson just needs to go all out in finals he can hold on and be ahead of Andrew and Miller. Cordes will be hard to beat though.

Not at all sold that Michael Andrew will be in contention for a spot in the 100 Breast. 50 free sure. He’s had good times in 100br before but not at the level of Miller and Cordes.

Everyone is sleeping on Haas’ 100 for the medley. Just imagine Murphy, Cordes/Andrew, Dressel and Haas/Pieroni/even Ress or Held for a medley. That may be world record caliber one day

Haas had great split last summer, we won’t get into his near exchange mishap on the medley prelims. I think if he were to focus on the 100/200 AND his start/turn explosiveness he could swim 47-low flat start. I worry that his training for the 400m/500y limits his potential for the 100, but my name isn’t Eddie Reese so take that with a grain/heaping of salt.