Bilquist Drops 28.75 in 50 Meter Back at Cactus Classic 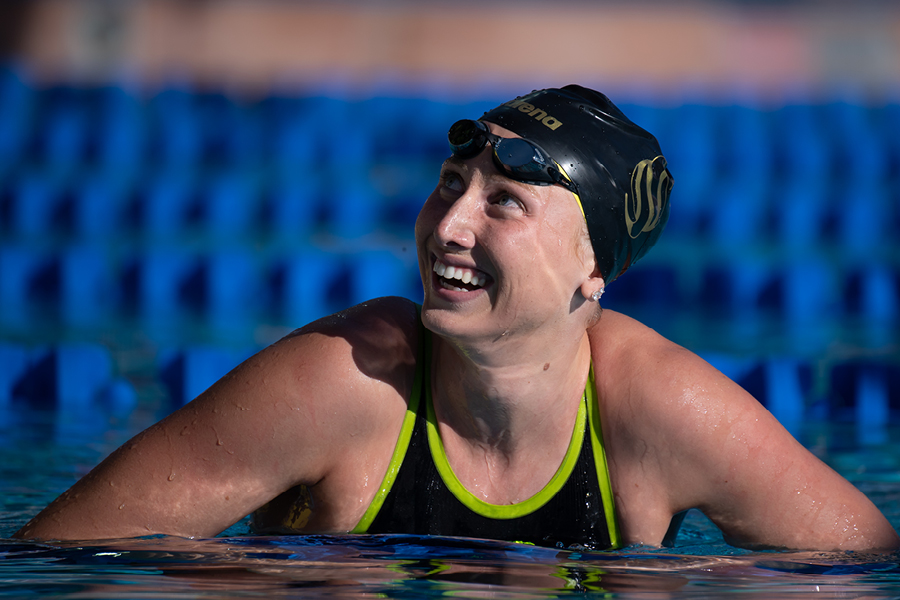 While temperatures reached highs of 98 degrees Fahrenheit in Scottsdale last weekend, the heat was not the only thing blistering. Swimmers dropped some sizzling lifetime bests and season-best times at the Cactus Classic hosted by Scottsdale Aquatic Club.

Cal grad Amy Bilquist of Scottsdale Aquatic Club highlighted the women’s side of the meet, posting a 28.75 in the 50 back and coming within half a second of her lifetime best time from 2017.

Bilquist then dominated the 100 back with a time of 1:01.58, a ways off her lifetime best time of 59.37 from the 2016 Olympic Trials but only about a second off her season best time from the May Pro Swim Series.

She underwent shoulder surgery in January after the International Swimming League season, but she was back to racing in March at the Western Region Sectionals. Bilquist is set to race the 100 back in the U.S. Olympic Trials Wave II in less than two weeks.

None were lifetime bests, but Carlson came within about 1.5 seconds of her best 200 breast time from the 2019 Kevin Perry Senior Invite.

The 50 breast was an impressive event at this meet where Kaitlyn Dobler of The Dolphins Portland Swimming posted a 31.51 in the event to claim 1st place, about .61 off her lifetime best from the 2019 World Junior Championships. This was a season-best time for the USC rising sophomore.

Dobler also swam 100 breast (1:09.21), coming within 2.3 seconds off her lifetime best from the 2019 World Junior Championships. She is an Olympic hopeful in this event, ranked 6th among SwimSwam’s top 8 picks in the U.S. Olympic Trials Wave II.

In the same 100 back final, 13-year-old Ella Cosgrove of Tucson Ford Dealers Aquatics dropped a lifetime best 100 back (1:06.65), earning a new Futures cut and beating her previous best from earlier this month by 1.5 seconds.

Van Der Laan also took down the 200 breast with a time of 2:17.54, within .51 of his lifetime best time from the 2019 Australian Open. These were his only events last weekend.

Another breaststroke star of the meet was BYU’s Brad Prolo from Utah Valley Aquatics. He secured his first U.S. Olympic Trial Wave I cut in the 100 breast prelims with a time of 1:02.71, crushing his previous best from April by more than one second and undercutting the qualifying time by about half a second.

BYU grad Payton Sorenson of Sun Devil Swimming highlighted the 50 free with a time of 22.47, within one third of a second of his lifetime best time from the 2019 Summer Nationals.

Way to go, Eva! We are really looking forward to you suiting up for the Bruins in the fall! 💙💛

Was she in Lane 1???? For anyone that knows that pool…you KNOW what I’m talking about.

For anyone else that doesn’t know this pool…I am definitely NOT SLAMMING Amy!

Don’t know if she was in lane 1, but distance pace work in that lane was the worst.

I’ve coached many swimmers at that pool, and the Lane 1 myth is a bit overhyped… my swimmers split the same either way.