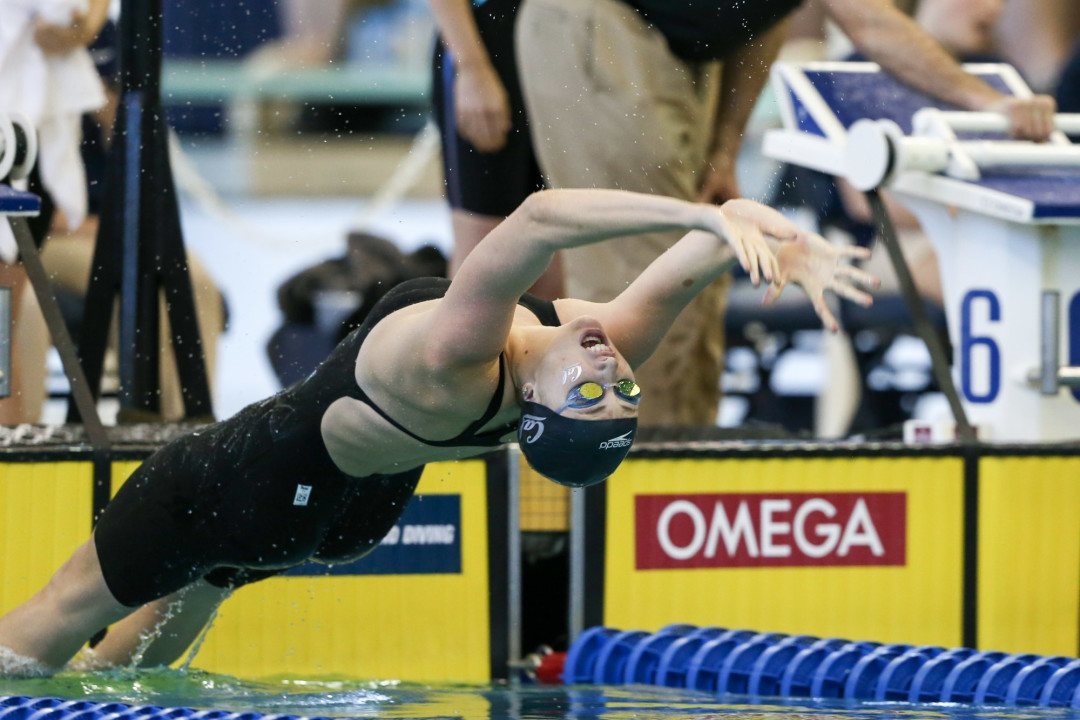 In the 100 back, Pac-12 champ Amy Bilquist blasted a dominant 51.93 in the 100 back to break the former Pool Record of 52.22 set by Natalie Coughlin in 2003. Archive photo via Tim Binning/TheSwimPictures.com

The Texas Longhorn women remain undefeated after taking their 3rd dual meet win of the season against a top 10 team. Texas made the trip out to Berkeley, California to pull off a nailbiter victory against the Cal women. It came down to the final event, but the Longhorns hauled in 152 points to win the meet over Cal’s 148 points.

Despite the narrow loss for the team, the Cal women saw multiple swimmers take down Pool Records. American Record holder Abbey Weitzeil downed the Pool Record in the 50 free, clocking a 22.09 to clear Liv Jensen’s previous mark of 22.18 from 2009. In the 100 back, Pac-12 champ Amy Bilquist blasted a dominant 51.93 in the 100 back to break the former Pool Record of 52.22 set by Natalie Coughlin in 2003.

Senior Madisyn Cox and Sophomore Joanna Evans were instrumental in the Longhorn victory, with both swimmers picking up multiple individual victories. Cox pulled off a successful triple, kicking things off with a dominant 1:45.1o victory in the 200 free to outpace Cal’s Weitzeil (1:48.02). She then went on to complete her individual sweep with a 2:11.36 in the 200 breast and 1:56.14 in the 200 IM.

BERKELEY, Calif. – No. 4 Texas (7-0), behind another workmanlike performance from throughout its roster, posted its third win over a top-10 opponent this season and knocked off No. 9 California (2-1) by a 152-148 count Friday evening at the Golden Bears’ Spieker Aquatics Complex.

Texas opened the meet by defeating a Cal 200 medley relay group that featured an Olympian on each stroke.  UT sent out seniors Tasija Karosas and Madisyn Cox plus sophomore Remedy Rule and junior Rebecca Millard and took the meet-opening win at 1 minute, 38.95 seconds.  It marked the Horns’ fifth 200-yard medley relay win in as many meets this season.

Sophomore Joanna Evans, a Rio Olympian from The Bahamas, gave UT its second straight win with a victory in the 1,000 freestyle at 9:50.33.  Cox returned for the 200 freestyle and defeated U.S. Olympians Abbey Weitzeil and Kathleen Baker in 1:45.10.  The swim was a season best for Cox, who ranks fourth nationally in the event early on this season.

Texas sophomore Olivia Anderson posted another win for the Horns in the 100 breaststroke and was victorious at 1:01.42.  Senior Jordan Surhoff took third at 1:03.44 while sophomore Brooke Hansen placed fourth at 1:03.72.

Millard registered a win over Egyptian Olympian Farida Osman in the 100 freestyle in 49.05 before Cox posted her second individual win in the 200 breaststroke at 2:11.36.  Anderson followed in second at 2:13.91.

Evans finished off a sweep of the middle distance and distance events with her victory in the 500 freestyle at 4:47.47.  Sophomore Meghan O’Brien led a one-two Texas showing in the three-meter diving event with 362.93 points.  Freshman Alison Gibson added a second-place total of 321.15 points.  Earlier in the meet, Gibson notched a second-place showing on one-meter while O’Brien and sophomore Sofia Rauzi placed third and fourth, respectively.

Cox put away her third consecutive win and captured the 200 IM by well over two seconds in 1:56.14.  California wrapped the meet with a victory in the 400 freestyle relay, but it wasn’t enough, as Texas needed only a second-place finish to secure the meet win.

The unbeaten Longhorns take on a formidable test Saturday afternoon when they meet No. 1 Stanford at the Cardinal’s Avery Aquatics Center.

POST-MEET COMMENTS
Texas head coach Carol Capitani
I’m very proud of our team today. Close meets are a reflection of a total team effort, and it’s great to see everyone come together and race tough. We had some big swims when it counted – my hat is off to (Rebecca) Millard, Joanna (Evans), Olivia (Anderson) and Madisyn Cox –  for winning their respective events. Our divers also knocked it out of the park with a 1-2-4 finish on three-meter, after just missing out on the win on the one-meter board. it was a fast meet for both teams, with Cal posting some top times in the country to date, and both teams setting some pool records. It’s fun to be a part of this team, and we’re happy to bring a “W” home to Texas.

BERKELEY – California and Texas staged a back-and-forth battle during their dual meet Friday afternoon at Spieker Aquatics Center, but the Longhorns prevailed in the end, 152-148.

Overall, the Golden Bears set one school record and two pool records, with four of their race-winning times ranking as the fastest in the country so far this season.

“We knew coming in that it was going to be a dogfight to say the least,” assistant coach Ian Walsh said. “The women swam their hearts out and we saw some great things happen. As we say day in and day out, it’s about progressing and championships aren’t on the line in November, so I think we’re taking a step in the right direction.”

The meet came down to the final event – the 400-yard free relay – with Cal needing to sweep the top two spots to force a tie. The foursome of Amy Bilquist, Maddie Murphy, Abbey Weitzeil and Farida Osman came through to win in 3:15.82, which established a pool and Cal dual meet record with the nation’s fastest time of the year. Texas, though, took second with the Bears’ other relay in third. As a result, the Longhorns emerged with the four-point victory.

“I feel really good about both my races,” Bilquist said. “In my 100 back, I felt super strong, and in my 200 back, I felt like I could do another 50, which really makes me excited for the rest of the season and where I’m at with my training right now.

“I tried to just go out there and race today and not worry about the times,” she added. “The times were like a cherry on top. It’s a bummer we didn’t win collectively, but I think everyone went out there and fought as hard as they could.”

In addition to Bilquist, Weitzeil also set a pool and Cal dual meet record with the fastest time in the NCAA, winning the 50 free in 22.09. The old pool mark was 22.18 by Liv Jensen in 2009.

Noemie Thomas also put her name atop the national time sheet with her time of 51.89 in a victory in the 100 butterfly.

Phoebe Lamay broke her own school record by a point on the 1-meter board when she won the event with a score of 314.18.

Cal’s divers are next in action Nov. 17-19 at the Texas Diving Invitational, while the swimmers head to the Georgia Fall Invitational Dec. 2-4.

Does Natalie’s 51.44 100 back from a year ago not count because it was a time trial?
https://swimswam.com/holy-underwaters-watch-natalie-coughlin-tom-shields-race-100-yard-back-cal/

That could be it. I’m not sure. But their twitter and press release called Bilquist’s swim the pool record.

Horns are for real! Noemie Thomas with some nice swims as well.

if they don’t fall apart like last years NC’s

and the year before that

And the year before that…

Too add to that, I think the Texas women have won against Cal and Stanford the last two years, and then when NCAAs comes around they get put down by them and score half or a third or less than these teams they beat in dual meets. It really looks like Carol just rests her team so she looks good midseason… probably helps recruiting but sabotages their taper. They were definitely good enough to get 5th or so last year, but it seems carols ego was too big to let the girls swim as tired as the teams they race. Deja Vous

If Amy Bilquist had her 24.73 backstroke split on the Cal 200 medley A-relay then the Cal-A relay would have placed first instead of second in that event … and Cal would have won the meet. I wonder why Bilquist was on the B-relay anyway; strategy, or could she really have outperformed her practice times that much? Of course, that was the first leg of the first event, and other things could have broken differently, but there is a mathematical fact for you.

would of, could of, should of

Multiple sub-optimal decisions and performances by Cal led to the outcome – it was a team effort!
Here are a few of the most obvious ones…
As noted, Moving Li and Bilquist to A Med Relay changes the outcome of the event and the meet
McLaughlin getting only 5th (!) in 200 Fly changes the outcome of the meet (did her goggles fall off or something?)
Stacking the 400 Free A relay when Cal knew they needed to get 1st and 2nd to win the meet effectively gave them no chance (like attempting a field goal on the last play when you’re down by 4)

There were tons of minor tweaks & shuffling that could have resulted in such a tight score being flip-flopped. Ultimately I believe the Golden Bear’s priority here was just to continue making improvements and work out the little details in the pool in a competitive scenario.

The Cal women swam tired and raced their hearts out against what’s currently a very good team so you couldn’t ask anything more of them. Bragging about dual win streaks isn’t really their style I don’t think.

McKeever has her eyes on the bigger picture which will be quite the challenge for her charges for the next few seasons. Talking about the expected dominance of their arch nemesis Stanford at NCAAs of course 🙂