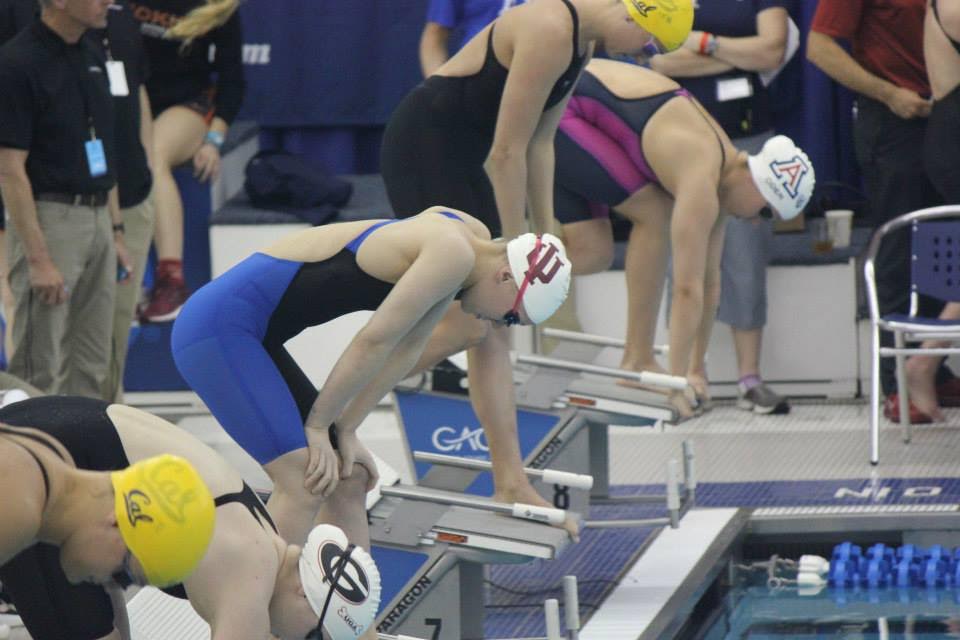 While Minnesota has had a stranglehold on the top spot in the Big Ten for four years in a row... Archive photo via Indiana University Swimming & Diving

While Minnesota has had a stranglehold on the top spot in the Big Ten for four years in a row now, the Indiana Hoosiers have been keeping the Golden Gophers honest each and every year with big end of the year swims in both individuals and in relays. After having been the top team in the Big Ten for three consecutive years before Minnesota began its current streak, the Hoosiers have assembled very deep squads on an annual basis, and have led an absolute assault on the record boards. One of the most explosive swimmers for IU over the course of her NCAA career has been Haley Lips out of Greer, South Carolina, and she will be an invaluable assault for her school over the next month.

A household name during her time in the YMCA swimming scene, Lips excelled as a member of the Y-Spartaquatics Swim Club (Middle Tyger YMCA). She held multiple individual YMCA national records both in short course and long course swimming, and to this day holds the LCM YMCA record as a member of her club’s 400 free relay (3:51.98) from 2012. Additionally, she still holds nine South Carolina short course state records and fifteen long course records as of 2016.

Although her individual results were very impressive, Lips got to be a part of something extremely special while competing on Indiana’s 800 free relay. Contributing the third leg on the Hoosiers’ relay in finals, Lips crushed a monster 1:44.33 split to help IU (Lindsay Vrooman, Cynthia Pammett, and Brooklyn Snodgrass being the other three members) win the event title with a 6:59.48, the fastest time and also the first sub-7:00 performance in conference history. It is also worthwhile to mention that Lips’ split was the fastest split of the entire field that night.

The following month, Haley would receive the opportunity to swim at the NCAA Championships, and she would turn in a 43rd place finish in the 200 fly with a 1:59.42. Additionally, as a member of the 800 free relay, she would earn Honorable Mention All-American honors while helping the Hoosiers take 12th overall (7:05.32).

Finishing only 27 points behind Minnesota in last year’s team race, the Hoosiers will be the Powder Keg of the conference this week, with only one or two solid swims to start off the meet needed to possibly igniting a team-wide effort to claim the Big Ten throne once again. As the 800 free relay is on the first night of the meet, the Hoosiers know that this is one event that they are the class of the field in, and with the entire relay from last year’s record-setting performance returning for this year’s edition of the Conference meet, the record book may be re-written a few times more in 2016. Regardless of how she performs over the course of the next month, Haley Lips will go down as one of the most reliable swimmers in program history, and a champion through and through.

Around 8 years old is when I started swimming for a club team. My mom took me to try out and ever since then I’ve loved being in the water.

My favorite memory is from my freshman year at Big Tens on the 800 free relay when we broke the 7:00 minute barrier for the first time in Big Ten history. There was so much energy from everyone on deck and the four of us on that relay were all super shocked and happy that we won and broke a record. I was so excited that I had become part of such a motivated, hard working team.

As a freshman, you provided a crucial leg on a historic 800 free relay at the conference championships that became the first team in Big Ten history to crack the 7:00 barrier. You would also lead off the relay that re-set that record at last year’s Big Ten Championships as well. Can you describe what it was like to be a part of those two historic relays during your NCAA career?

Those two relays were insane. It was so much fun to be part of a record breaking relay. I went faster in both of those relays than I ever had before which caught me by surprise but also reinforced how hard I am able to train with my team. Although the swimmers on each relay were different, we all shared the same desire to swim as fast as we could.

Before joining the Hoosiers as a freshman, you gained some valuable international experience while representing the U.S. National Junior team. Having competed in big events at competitions in Europe, South America, and in Canada, do you feel like getting some big race exposure on the international stage has helped you develop into such a successful swimmer in the collegiate scene? Or do you feel like college swimming is a different challenge altogether?

Having background at large meets on an international stage prepared me for the size of meets like the Big Ten championships and NCAAs. However, college swimming is a whole different world. Getting used to how fast people were able to swim in season at dual meets was something that I had to learn. Once I caught on to swimming fast in season I was able to swim faster at than I ever had at big time meets.

Having competed at the NCAA Championships twice in your three seasons at Indiana, you must be quite accustomed to preparing for the “big meet” in March by now. Do you feel like it gets a little easier every year to prepare for NCAAs when it comes to Championship season?

After my freshman year big meets became like any other meet. Thinking about NCAAs as if it is any other meet takes the pressure away and allows me to just have fun while competing. I think having fun is one of the most important things an athlete can do while competing, which in a way makes it easier to prepare for NCAAs.

The team. I decided on Indiana because of how much like a family the team was and still is. They are supportive of everyone and genuinely want everyone to swim to their best ability. Without them my college career would have been a much tougher road. They are wonderful.

I hope to be accepted to grad school for school counseling.

What should we look forward to from Indiana as a whole at this year’s Big Ten Championships?

A ton of fast swimming. This group of girls is so tough and so driven. They want to succeed for themselves and each other. We have such a strong freshman class this year that just adds to the depth of our wonderful team. I can’t wait to race with these ladies at Big Tens

HALEY YOU ARE SO HOT