BigTen Senior Spotlight: Marni Oldershaw of the University of Michigan 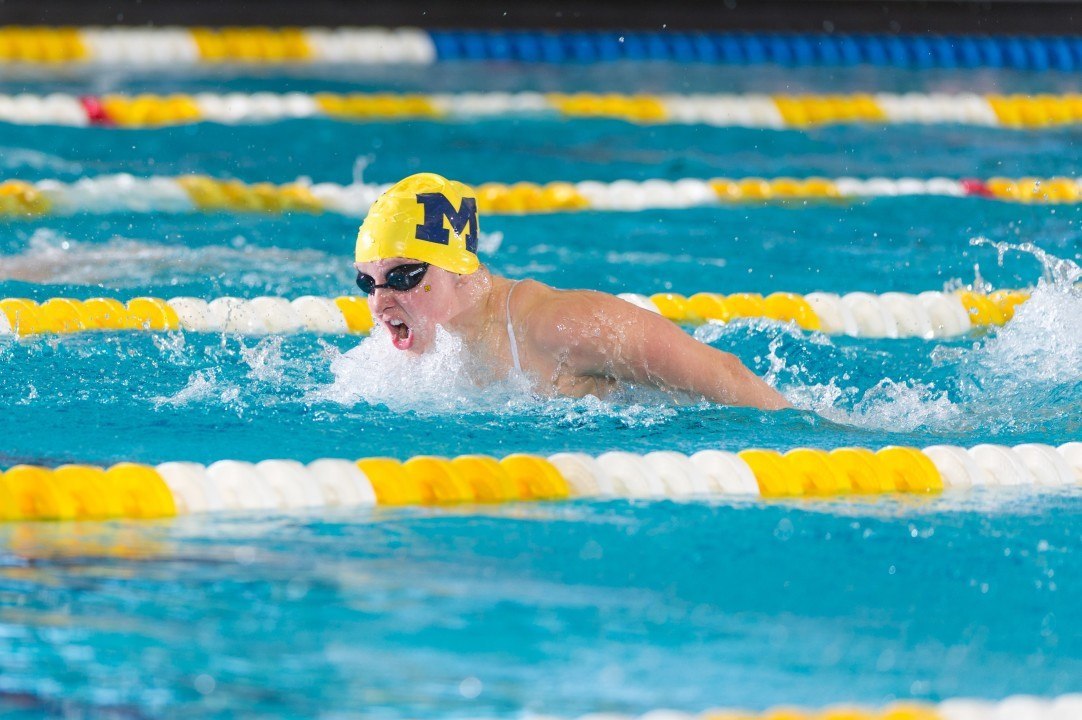 With under 48 hours left until the 2016 Big Ten Championships kick off, the host of this year’s event, the... Archive photo via University of Michigan Swimming & Diving

With under 48 hours left until the 2016 Big Ten Championships kick off, the host of this year’s event, the University of Michigan, will be looking forward to putting on a show in front of a home crowd. Coming off four consecutive years where the team improved their placing at the Conference meet (2012 – 8th, 2013 – 6th, 2014 – 5th, 2015 – 3rd), a senior-heavy Wolverine squad may have the most momentum to work with amongst all participating teams, and Marni Oldershaw out of Oakville, Ontario may prove to be one of the biggest catalysts in the host team’s push this week.

In long course action, Oldershaw would receive the opportunity to compete at the 2013 World University Games for Canada in the 400 IM. With that race being her only event in Kazan, she would give it her all en route to setting a new school long course record with a personal best effort of 4:44.47, good for fifth overall.

With an extraordinary track record both as an NCAA athlete and as an international swimmer, Marni Oldershaw has been one of the most important factors in the Wolverines’ ascent in the Big Ten over the last three years. With a home crowd roaring and a large sum of points on the line, it should be expected that the senior will thrive as she always has on the big stage, and a return to the NCAA Championships is very much within her reach. Look for Oldershaw to be a force to reckon with as she races in Canham Natatorium one last time this week.

I started swimming when I was 8. I was in swimming lessons and they told me I was too competitive. I was still in canoe/kayak, soccer, gymnastics, and volleyball, so by age 13 I had to make the decision to commit full time to swimming.

I have two. The first was Big Tens 2014, the 400IM. My training partner, Courtney Beidler, and I had been having great seasons and knew that either one of us was capable of winning the 400IM. We went 1-2, with Courtney winning. After the race next thing I knew I was running across the pool deck to hug Courtney. Singing ‘The Victors’ at the top of the podium was an unforgettable moment.

The second was at NCAAs 2014. I had never come top 16 at NC’s before and was itching to score points for Michigan. I had the race of my life in the 200IM and took off a whole second from my lifetime best. I was in the final heat so the results showed up right away and I was shocked to find myself 7th. I was genuinely surprised at my time, which I hadn’t experienced in a long time.

Can you describe what it was like to transition from swimming in Canada to swimming in the NCAA for the Wolverines? Was it particularly difficult for you, or did you find the process to be rather smooth?

Training wise it was very smooth. At Oakville Aquatic Club we had a similar schedule and intensity of training that helped prepare me for Michigan. Like any university student-athlete, there was a lot to adjust to in regards to school and living away from home. There was a lot to get used to such as swimming on a large team of girls, and of course short course yards. But the older girls on the team were great at breaking in all the freshmen.

Like several other swimmers in the Big Ten, you have some extensive international experience, including appearances at the 2013 World University Games, 2014 Commonwealth Games, and 2014 Pan Pacific Championships. Do you feel like your swims at these various international competitions have helped you better succeed in a collegiate environment? Or do you feel like the two are completely different?

The two are definitely hard to compare. Short course yards are very different from long course meters. The international meets I have competed in have helped me mature as an athlete. They also make me appreciate my team as I found it is easy to feel like you are on your own at international meets where swimmers are competing for medals, titles, and sponsorships. In the NCAA, swimmers are competing for their schools and teammates.

The Wolverines have 9 seniors between the swimming and diving teams on their roster for the 2015-2016 season. Whereas some other teams in the Big Ten may have considerable youth amongst their ranks, do you feel like having a big senior class has had a measurable impact in the weeks leading up to Big Tens?

It has been wonderful to have such a big and strong class all four years. Bo Schembechler, a famous Michigan football coach, said “Those who stay will be champions” and that has rung true to our class this season. We came into a new coaching staff starting our freshman year with the combining of the men and women’s teams, and Mike Bottom becoming our coach. Our class bonded very quickly at the beginning. Having a big senior class full of great leadership has been great for our team chemistry this year and we are very excited to be hosting our final Big Tens. Having a senior class with a lot of experience is a great asset, but our younger classes are full of talent and enthusiasm, which balance out the team.

Following the collegiate season I will be competing at Canadian Olympic Trials in April. I will be staying in Ann Arbor through till December to work on a current research project before heading back to Canada to pursue a degree in Clinical Psychology.

What should we look forward to from Michigan as a whole at this year’s Big Ten Championships?

I worked with Marni’s parents at White Oaks Secondary School in Oakville, Ontario and have known Marni since she was a little girl. Aside from all of the wonderful accolades for her accomplishments, what needs to be said is that she is a very humble, grounded young woman. In competitive sports, that is difficult to maintain, but Marni has done this well. We all will be cheering for her as she represents the Wolverines in this year’s competition and as she attends the Olympic trials.