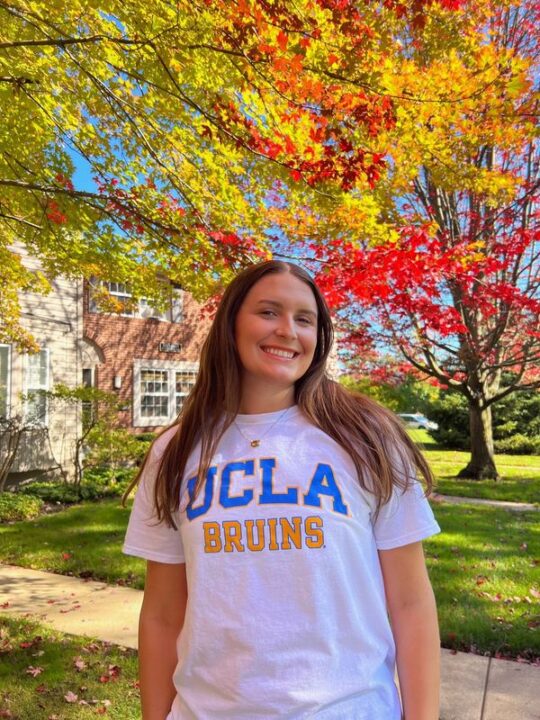 NCAA All-American and senior at the University of Michigan Kaitlynn Sims has announced she will be joining the UCLA Bruins for the winter semester. Current photo via Kaitlynn Sims

NCAA All-American and senior at the University of Michigan Kaitlynn Sims has announced she will be joining the UCLA Bruins for the winter semester. After competing for the Wolverines during the last three seasons, Sims, who is set to graduate in December, took this fall semester off from competition and was instead focusing on the recruiting process.

After completing my undergraduate degree from Michigan this December, I’ll be using the remaining 1.5 years of my NCAA eligibility to swim for UCLA. @uclaswimanddive see you in January🤍🐻

Sims has 1.5 years of remaining NCAA eligibility, which she plans to use at UCLA. The 2023-2024 season will mark Sims’ “fifth year,” which was granted by the NCAA due to the COVID-19 pandemic.

Sims got off to a roaring start at Michigan in her freshman season, getting down to 4:37.31 in the 500 free and 15:49.83 in the 1650 free, both of which stand as her lifetime bests in those events. Both those times were swum at the 2020 Big Ten Championships, and Sims was set up well for the 2020 NCAAs, though the meet was ultimately canceled due to the COVID-19 pandemic.

Sims will be a huge addition to the Bruins roster. Even with her down performances from last season, she would have been the fastest miler on UCLA’s team last year and the second-fastest 500 freestyler. Sims’ personal bests come in well under the UCLA program records in both the 500 and 1650 free. No Bruins swimmer has been under 4:40 in the 500 or 16:00 in the 1650 before.

The Bruins have gotten a huge boost to their mid-distance and distance free. Katrina Bellio, a freshman from Canada, has just begun her collegiate career, and comes in with blistering speed free events as well. Bellio was a member of the Canada’s Tokyo 2020 Olympic team, competing in the 1500 free. Bellio’s LCM times convert to 1:44.81 in the 200 free, 4:41.29 in the 500 free, and 16:05.06 in the 1650. If Sims is back in her top form, she and Bellio could make a dynamic duo in the distance events for UCLA, both within the Pac-12 and at NCAAs.

UCLA is coming off a trio of successful consecutive seasons. At the 2020 Pac-12 Championships, UCLA took fourth, then moved up to third in 2021, and fourth again this past season.

It’s the bottom-effect. You would think a meet like SMU Classic would be a team comprised heavily of Seniors and Fifth-years that had benefitted from the years of the top-level D1 coaching. But doesn’t look like that was an option tor Michigan.

Maybe consider a hippocratic-type oath but for coaches. Doesn’t even need to be as strict as do no harm – how about have more positive impacts on athletes than negative. Baby steps are fine… But sheesh take care of athletes!

Welcome to Westwood, Kaitlynn! UCLA d-group is coming in hot. Looking forward to it – Go Bruins!

Why is everyone transferring out of Michigan?

And yet they still get top recruits… who will also probably wind up transferring. Is there something going on that I’m missing?

There is probably something going on that you’re missing, but slandering a team you don’t like seems a lot like acting out. Maybe talk to someone. It might help you find that ‘something’ you’re missing.

For the most part all the Big 10 teams seem to prioritize the conference results over NCAA. Probably has to do with how the coaches are compensated.

Maybe the more accurate question is “What will she be studying at UCLA?” It shouldn’t be perceived negatively to graduate a swimmer and then that swimmer uses their extra year of eligibility on grad school. Good for both!

She’s choosing not to use her senior year eligibility at Michigan and using her grad fifth year at UCLA. Good for her. But another big loss for Michigan. What is the number of athletes it takes until the athletic department and leadership will care?