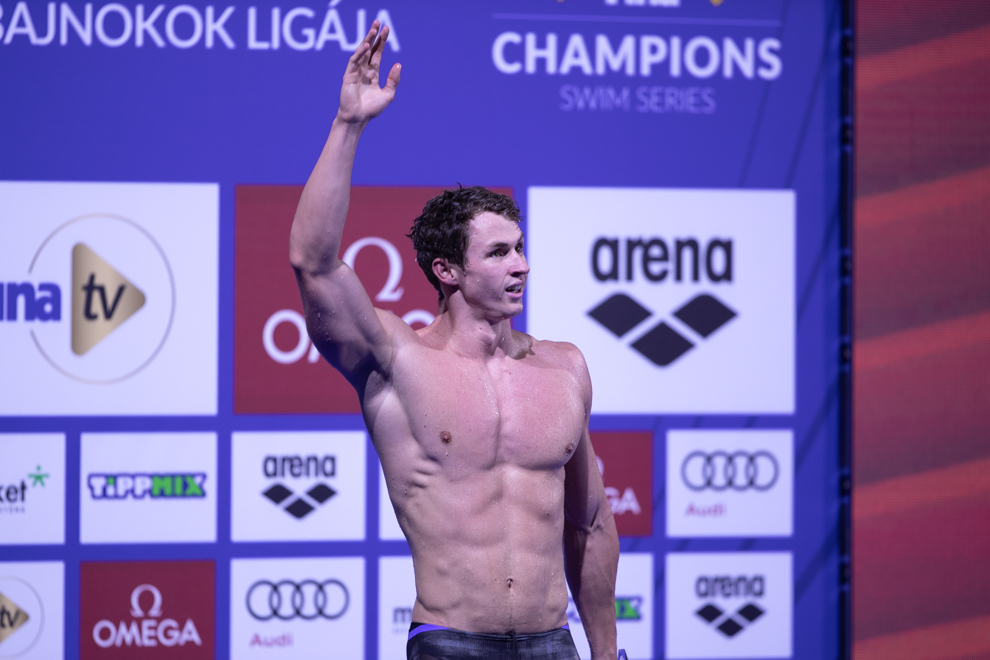 During the fourth preliminaries session of the 2021 British Swimming Selection Trials, accomplished sprinter Ben Proud put up a blistering 21.68 mid-pandemic effort in the men’s 50 free to easily take the finals top seed and clear the British Olympic qualifying standard of 21.78. Also taking place this morning were the prelims of the women’s 100 free, women’s 200 back, men’s 100 fly, and women’s 200 IM. So far, 19 Brits have clear the nation’s Olympic selection standards after three days of competition.

Plymouth’s Proud came in the meet with a 21.48 seed time, which he registered at the Guangzhou stop of the 2020 FINA Champions Series. He then swam the top prelims time in the event at 21.68, just two-tenths off his entry time before tonight’s finals. He was the only swimmer to break 22 seconds in the event, with 16-year-old Jacob Whittle of Derventio taking second at 22.40, three one-hundredths ahead of Wycombe’s Yusuke Legard (22.43). Proud was also the only swimmer to clear Britain’s selection standard of 21.78, which Proud has swum under now 32 times in his career.

Yesterday, Whittle swam the 16-year-old age record at 48.76, which ranks 8th in British history. This morning, Whittle’s 22.40 shaved seven-tenths off his former personal best of 23.11. His swim also broke another age record, taking down Thomas Fannon‘s 2015 record of 22.48 and becoming Britain’s 15th-fastest performer all-time. Whittle would need to drop a mammoth six-tenths of a second from this morning to hit the 50 free Olympic selection standard.

Proud now moves up to No. 3 for the 2020-2021 world rankings, only behind Russian Vlad Morozov‘s national title time of 21.41 and American Ryan Held‘s newly-minted lifetime best of 21.62. The Brit is also ahead of World top-5 swimmers Frenchman Florent Manaudou (21.72) and Brazilian Bruno Fratus (21.73).

Before Proud hit the water, Bath NC’s Freya Anderson and Loughborough’s Anna Hopkin tied for the top women’s 100 free seed at 54.13, both 0.25s off of the 53.88 selection standard and just sneaking into the top 25 times in the world before finals. Getting in for third was Edinburgh’s Lucy Hope (54.52) while teenagers Stirling’s Emma Russell (55.47) and Bromley’s Evelyn Davis (55.64) rounded out the AM top five.

After narrowly hitting the qualification standard in the men’s 200 fly, Bath NC’s James Guy did it again this morning in the 100 fly, swimming 51.71 to go under the 51.96 cut. That ties his World No. 16 season best from the Manchester meet from last month. Potentially looking to hit the standard is Bath NC teammate 21-year-old Jacob Peters, who swam 52.17 to place second in prelims, taking down his 52.19 lifetime best on March 15, 2020 at the Edinburgh International Meet.

Leading the women’s 200 IM was Loughborough’s Abbie Wood, hitting the wall at 2:11.20, just a tenth off of the 2:11.10 qualifying cut. At the February Manchester International Meet, Wood became the No. 2 Brit all-time in this event at 2:09.38, which ranks No. 2 in the world this season. Guildford’s Alicia Wilson, who is coming off her junior NCAA season with the Cal Bears, placed second at 2:13.01, a second-and-a-half ahead of Loughborough’s Candice Hall (2:14.56).

If proud is back to 2018 form, things are gonna be super intense at the Olympics

He’s looking well in shape and his stroke looks super strong. Excited for the 50 free in Tokyo!

Proud was wearing all Arena when he swam that. Guessing he’s also free from adidas now

According to Joe Litchfield they are no longer making suits 👍

Trials start in a couple minutes. Looking forward to it!

Some solid times across the board today.

I wanna see peaty do free

He swam a relay leg in ISL.

Glad to see such a good time from Ben in the heats. Hoping he can drop a few tenths for the final.

Agreed. I feel like he may have been carrying an injury during ISL. Something wasn’t quite right there.