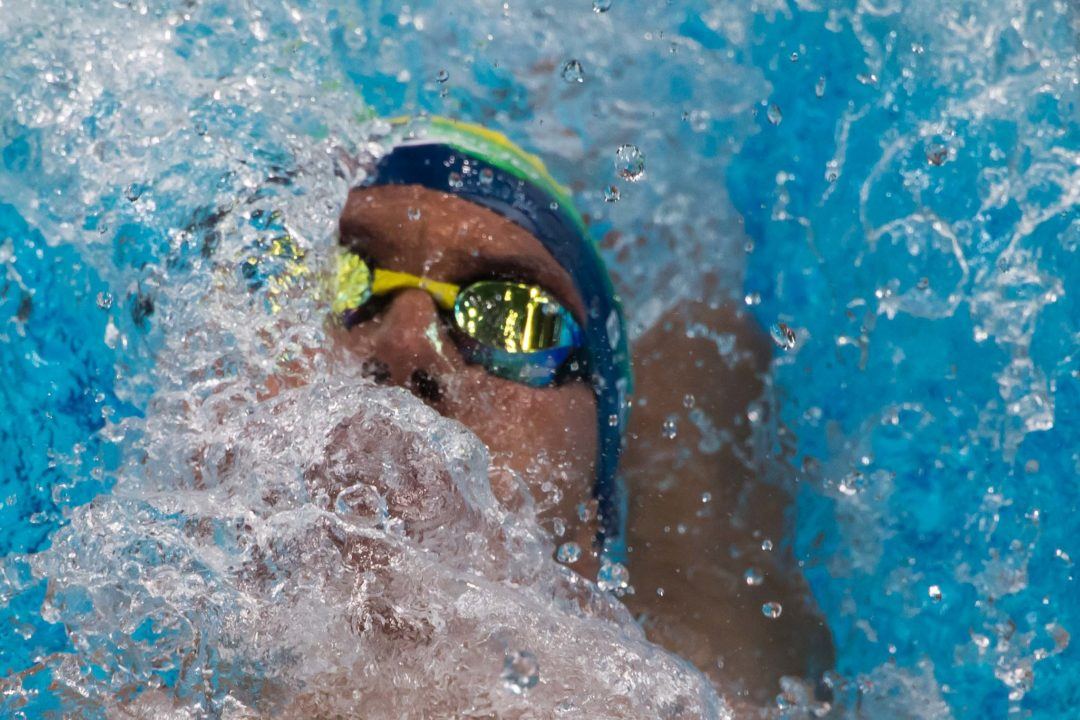 With the help of swimmers like Brandonn Almeida, the nation of Brazil continues to dominate the swimming events at the 2022 South American Games Archive photo via Mike Lewis/Ola Vista Photography

The nation of Brazil continues to dominate the swimming events at the 2022 South American Games. Through day 2, the Brazilian squad has amassed 35 total medals, including 18 gold, 12 silver, and 5 bronze.

Argentina is next in line but far away, carrying 14 total medals to stay ahead of the 3rd place team so far, Venezuela. Venezuela has accumulated 5 medals while Aruba and Colombia comprise the rest of the top 5 teams here in Asuncion, Paraguay.

Making noise for Brazil on day 2 was Leonardo de Deus, claiming gold in the men’s 100m back event. Stopping the clock in a time of 55.05, de Deus got the edge over teammate Guilherme Basseto who was only .03 behind in 55.08. Basseto already took the 50m back gold last night.

Rounding out the top 3 was veteran racer Omar Pinzon of Colombia, picking up his 3rd bronze of these Games with a time of 55.31.

A Games Record bit the dust courtesy of Gabriel Santos in the men’s 50m fly. The 26-year-old fired off a speedy mark of 24.00 to get the job done, keeping Argentina’s Robert Strelkov at bay. Strelkov posted 24.19 for silver, nearly a second off his lifetime best of 23.70 from 2019.

Brandonn Almeida also did some damage for Brazil, snagging the top prize in the 400m IM. Hitting a time of 4:19.25, Almeida established a new Games Record in the event en route to gold. That time is just off the 4:18.84 he delivered at the Brazil Trophy this past April.

On the women’s front, teenager Stephanie Balduccini demonstrated her freestyle prowess once again, collecting her 2nd gold of these Games.

After having already won the 100m free last night in a new Games Record, the future University of Michigan Wolverine clocked a time of 2:00.54 to score the 200m free victory. Following Balduccini, as she did in the 100m free as well, was Giovanna Diamante, earning silver in 2:01.86.

The women’s 100m backstroke podium tonight looked identical to that of the 50m back from night 1. Argentina’s Andrea Berrino topped the field in a new Games Record of 1:01.59, producing the only sub-1:02 outing of the field.

Brazilian Maria Luiza Pessanha took silver in 1:02.90 while Peru’s Alexia Sotomayor rounded out the top 3 in 1:03.07.