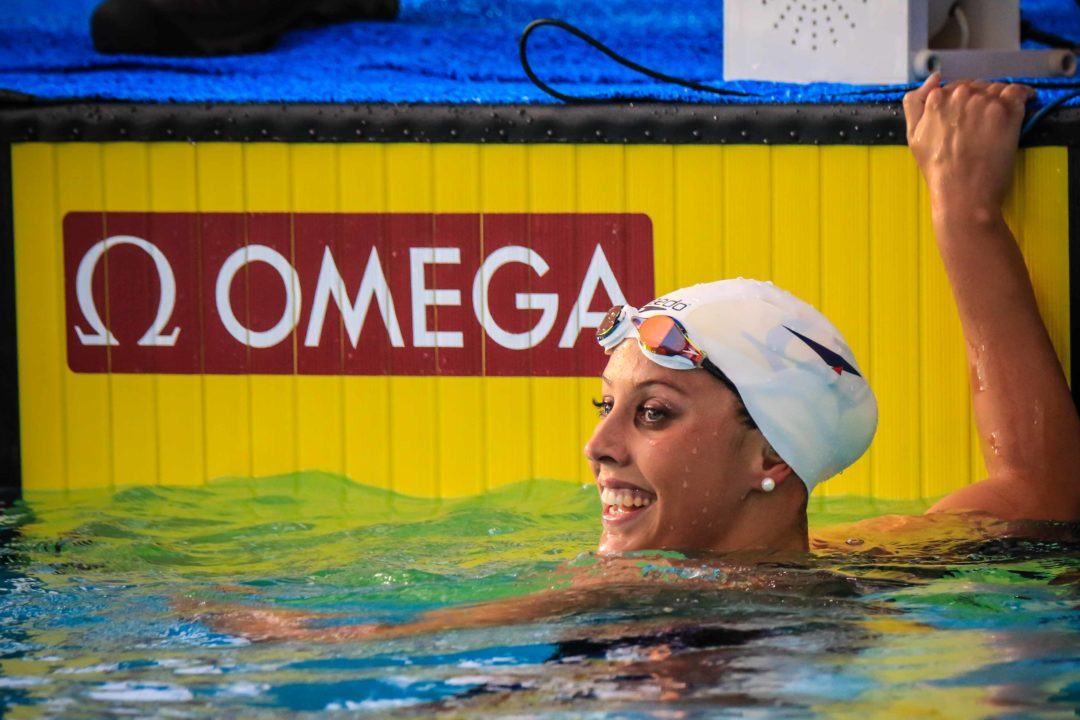 America's Kathleen Baker put on a show during the women's 200m IM, putting up the 2nd best time of her career while competing in Nice.

American Olympic medalist Kathleen Baker already made her presence known here on day 1 of the FFN Golden Tour Camille Muffat meet in Nice, France, wrangling up two top seeds from the heats. The Team Elite star produced a morning 200m IM swim of 2:11.31 to land lane 4 in that event, followed by a solid 1:00.03 top mark in the 100m back just 2 events later.

Baker would wind up scratching the 100m back final, thereby forfeiting her morning monetary earnings, with the 22-year-old instead having designs on going full-throttle on the women’s 200m IM event.

Baker put on a show tonight in this race, beating the next-closest swimmer of Katinka Hosszu by almost 3 seconds. Reigning World Champion in this event, Hosszu touched in 2:11.72 for runner-up, while home nation swimmer Fantine Lessafre rounded out the top 3 200m IMers in 2:12.32.

For perspective, Baker’s 2:08.75 time tonight would have placed 4th in Gwangju last year. She is now the fastest American this season, overtaking Melanie Margalis’ time of 2:08.84 from U.S. Winter Nationals. Baker also becomes the 3rd fastest performer in the world this season.

Team Elite squadmates Michael Chadwick and Kendyl Stewart were also in the pool tonight, with the former taking bronze in the 50m breast in 28.14. Winning that sprint event was Frenchman Theo Bussiere, who touched in 27.83, while Turkish athlete Emre Sakci also got under 28 seconds in 27.98.

Hosszu had earlier raced the 50m free as well, winding up 8th in 25.87. It was Melanie Henique of France who got the job done for gold in the splash n’ dash, registering a winning time of 24.86.

Michelle Coleman of Sweden was next in line in 24.96 for silver, while Charlotte Bonnet notched bronze in 25.87.

Sans Baker in the 100m back final, Coleman took advantage of the absence and raced to the win in 1:01.03. Hosszu was in the water yet again, clocking 1:04.59 for a far-behind 8th place finish in the 1back event.

Geez. I first read the title as “Baker’s Busts Out…”. Had to hide my eyes.

Of course she’s rested. I presume that’s her “rested meet” of winter season. She’s using that LCM meet as a test to see where she is right now.

plus the 1500 earlier in the day. It seems pretty pointless she didnt win much prize money by doing this.

Could well be fast training swims, remember that some athletes due to scheduling, etc. use meets for training too.

Its one heck of a training swim tho. Its Beasty.

The eyelashes are back!

Only thing though if you think about it the last 5 Olympics the ims have been swept by one person at each Olympics. As much as I would love to see Baker win she’s going up against history

And Michelle Smith in 96.

I forgot about the 96 Olympics good catch

This is an extremely encouraging sign, the first instance of good form after a lost 2019. Especially with a good taper, she could have a gold-medal winning time in her in this race-coming home 32.1 is way off the 31.2 she came home in in 2018, which could easily be a function of rest.

I didn’t think about this but you are right— Hosszu is beatable.

I mean, that is quite evident considering Hosszu has now been beat two times recently.

Maya Dirado would definitely agree too!