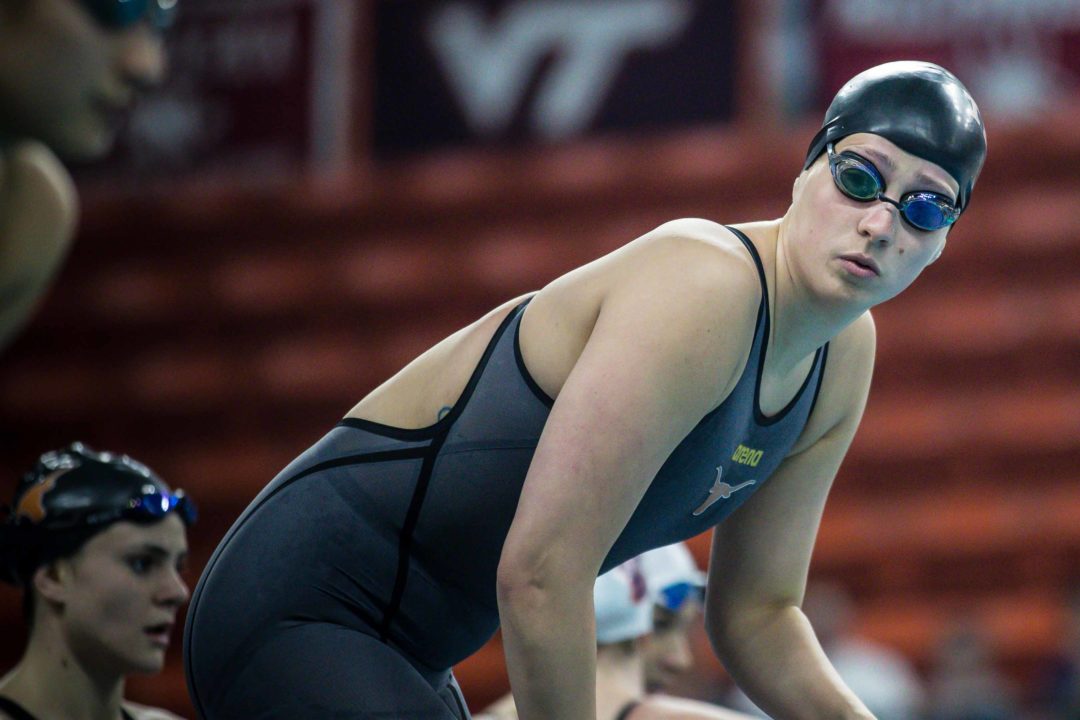 Evans will race the 400 freestyle at her 2nd Olympic Games will Bastian will make his debut in Tokyo with the 100 breaststroke. Archive photo via Jack Spitser/Spitser Photography

Joanna Evans and Izaak Bastian have been announced as the Bahamas’ 2 representatives for swimming at the Tokyo 2020 Olympic Games. Evans will race the women’s 400 freestyle in Tokyo while Bastian has been selected to race the men’s 100 breast.

Evans was the only Bahamian to achieve a FINA A Olympic qualifying standard during the Tokyo 2020 qualifying period, having hit a 4:07.33 400 freestyle at the 2021 Longhorn Aquatics Elite Invite in Austin, Texas in May. That swim for Evans was just under the 4:07.90 FINA A cut and got her within a second of her 4:06.60 PB. Evans posted that 4:06.60 lifetime best at the Rio 2016 Olympic Games which was good enough for a 13th place finish.

Collegiately, Evan has represented the University of Texas between 2015 and 2019 and has continued to train at Texas since her graduation. Evans ended her NCAA career at Texas as an 11-time Big 12 Champion and currently holds the 500 freestyle (4:35.05) and 1650 freestyle (15:51.74) school records.

While Evans qualified via the FINA A cut route, Izaak Bastian was selected by Bahamas Aquatics as the top-ranking male in the country to have swum a FINA B qualifying standard. Bastian recently hit a 1:00.87 in the men’s 100 breaststroke at the 2021 Bahamas National Championships which undercut the 1:01.73 FINA B standard while hovering above the 59.93 FINA A. The swim for Bastian marked a new national record in the event which was actually 1 of 3 NRs he set at the meet, having also broken the 50 breast mark with a 27.60 and the 200 breast with a 2:15.14.

Like Bastian, Laura Morley managed to notch a FINA B cut at the recent Bahamian National Swimming Championships, hitting a 2:28.12 in the 200 breast. That was under the 2:29.89 B standard but trailed the 2:25.52 FINA A. According to the selection rules set forth by FINA, Morley’s B cut could potentially earn her an invitation to the Games. Once all FINA A qualifiers are invited (to a maximum of 2 per gender per event per country), individuals with FINA B cuts are invited based on individual world rankings in their event until the maximum quota of Olympic athletes has been hit.

This will be the first Olympics since 2004 that Arianna Vanderpool-Wallace will not be racing for the Bahamas, having swum at the 2008, 2012, and 2016 versions of the Games. Vanderpool-Wallace’s top finish at the Olympics came at Rio 2016 when she delivered a 24.60 in the women’s 50 freestyle to finish 9th overall in the semi-final. That 9th place finish for Vanderpool-Wallace is actually the highest placing swim by any Bahamian at an Olympic Games meaning that no one from the country has ever qualified for an Olympic final.