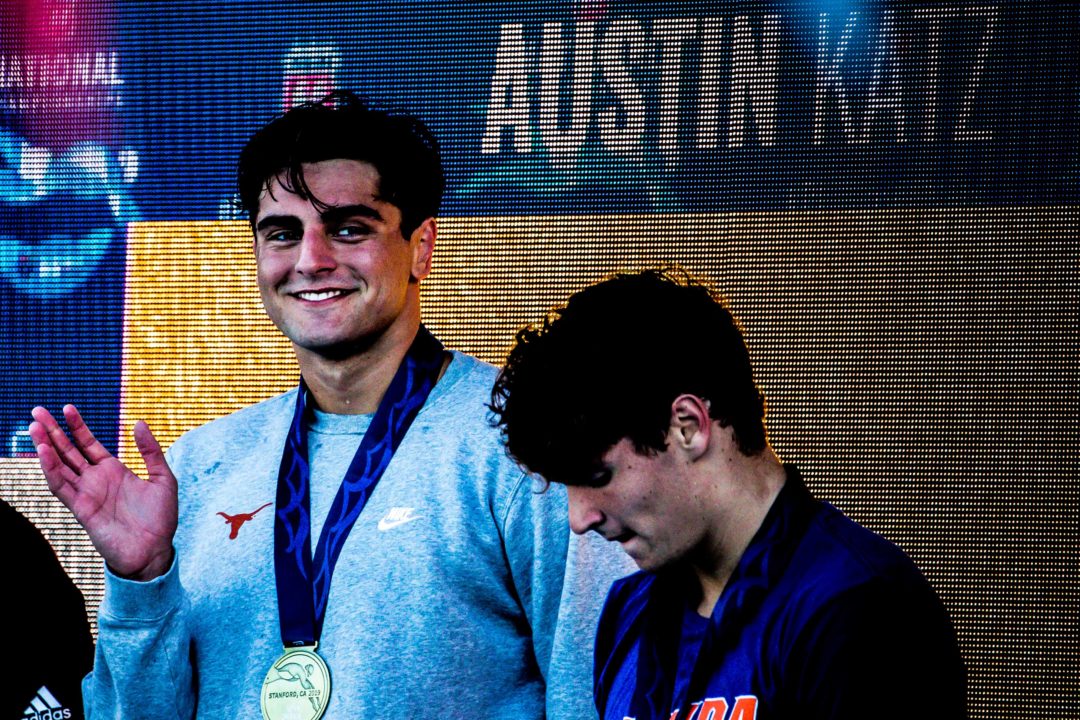 His time of 1:39.15 in the 200 back ranks second in the nation this year, behind only Texas A&M's Shaine Casas (1:38.21). Archive photo via Jack Spitser/Spitser Photography

The final session of prelims at the 2019 Minnesota Invitational concluded earlier today, with the session highlighted by Texas junior Austin Katz taking the top time of 1:39.15 in the 200 back. That time ranks second in the nation this year, behind only Texas A&M’s Shaine Casas (1:38.21). Additionally, it makes him just the third man under 1:40 this season after Casas and NC State’s Coleman Stewart (1:39.98).

A fantastic battle for the 200 breast win is brewing after three men went 1:52’s this morning. Minnesota sophomore Max McHugh leads the way at 1:52.07, with Cal sophomore Reece Whitley and Texas freshman Caspar Corbeau not far back at 1:52.79 and 1:52.83, respectively. For Corbeau, that’s a huge best time, taking a chunk out of his old best of 1:54.56.

Abbey Weitzeil of Cal led the 100 free prelims on the women’s side, coasting to a 47.12. Nobody was close; second this morning was her teammate Robin Neumann and Michigan’s Daria Pyshnenko. They tied at 48.51, with Texas’s Claire Adams (48.70) and Iowa’s Hannah Burvill (48.96) also getting under 49. Weitzeil will be chasing Erika Brown of Tennessee tonight, who went 46.15 at the Tennessee Invite and leads the nation.

2 Back will be fun to watch at NCAAs. Katz Will probably have the #1 spot going into March and is the favorite to win it. However, come March Casas could give him a challenge similar to this past Summer if he manages his schedule well enough.

Someone check Sam’s suit for an extra logo.

Durden with a lack of class as always. Sore loser?

He probably learned it from Eddie, who reported the winner of the B final at NCAAs in 2013 or 2014 for the exact same violation and had him disqualified. (Except that only Texas swimmers seem to think Dave actually did this – other commenters have said that they’re on deck and that Dave was nowhere near the official who called it).