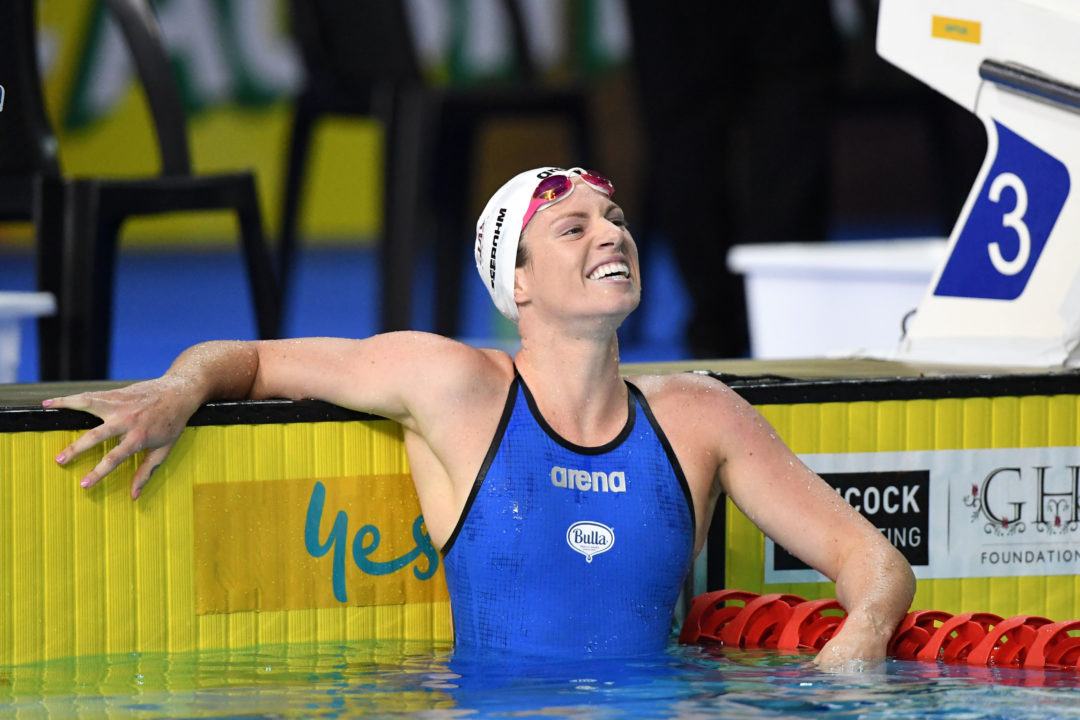 Emily Seebohm has won the 200m backstroke world title the past 2 long course World Championships, but she wasn't able to hit the mark this week. Archive photo via Swimming Australia, Ltd.

The thrilling 6-day Australian World Swimming Trials concluded tonight in Brisbane, with a subsequent announcement by Swimming Australia of the 27 swimmers named to the roster for Gwangju. The roster is qualified as ‘initial’, as the organization’s announcement states, “possible additions in either Olympic or non-Olympic events will be decided in the next few weeks.”

However, knowing the names as they stand today, we can identify a few surprises, both good and bad, in terms of qualification for Worlds from this island nation. Below are the surprises among those who did not make the World Championships roster.

Jack Cartwright Pulled Out of the Meet

Irvine is a bit unfortunate. He wasn’t far off QT in both 100 & 200 and had he finished 2nd in the 100, his selection would’ve been near automatic (ostensibly as fly back-up for 4XMED but in reality swimming both 100 & 200) but unfortunately Temple finished ahead of him in the 100 and therefore undermined his case.

Sheds some light on Seebohms performance:

I just realised last night that Seebohm was at the Gwangju not long ago after watching Michael Andrew’s Vlogs. I didn’t know that she got food poisoning there but I already expected that she definitely wasn’t feeling 100%, especially after recovering from a busy time there.

Meanwhile Atherton actually tapered for the trials, at least according to what she said at the interview after the 200 back. It’s not that I think that she wouldn’t do well at Worlds, I have faith that her and McKeown can pull out amazing performances and have super bright futures ahead of them!

Just generally across the board, I’m not sure if having trials 5 weeks out of World Champs is the best idea for Australia. It might work for the US and other countries but I think there is no one size fits all. This year, Australia has done it quite differently. We had the ‘Australian Swimming Championships’ in April, where it was broadcasted on TV. Then the trials were a whole separate thing. For someone who’s followed Australian swimming for a very long time, this initially confused me a little. It probably would have been a shake up for swimmers themselves, and they each would have taken a different approach in their preparation for the two. For example, Winnington probably had… Read more »

They also had trials close to Pan PACs last year . I just wish they’d combine it all into one event

BlueCheese, they did something similar last year. Due to CG being at the usual time for Nationals, they moved them to Feb and then had a selection meet around this time last year for Pan Pacs. The old system wasn’t really working. The number of AUS swimmers who DON’T need to peak for selection meets can generally be easily counted on one hand and the gap between Nationals/selection meet in Apr and the major intl meet (usually in the Jul/Aug/Sep bracket) is such that swimmers need tp have another prep then taper. Its been the case that maybe half the team/sometimes more have failed to manage this. However Swimming AUS, rather than making a clean break and having the AUS… Read more »