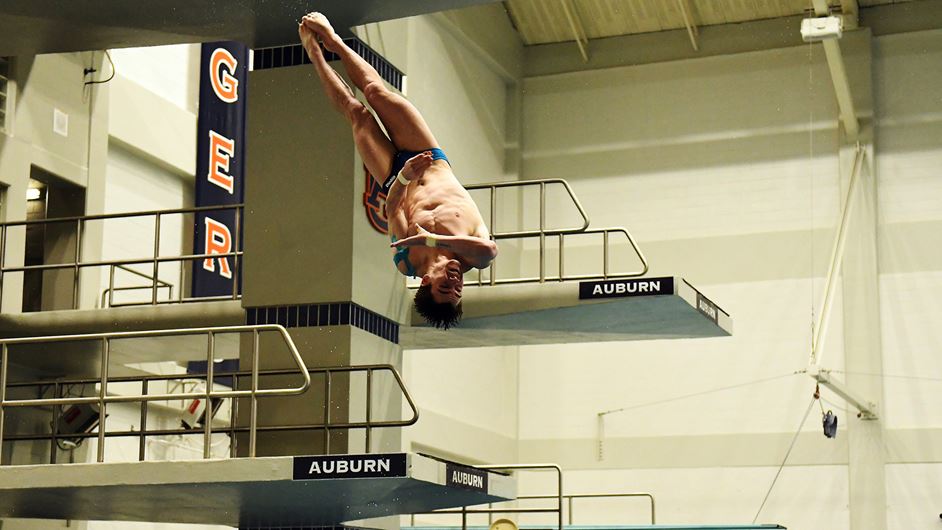 Conner Pruitt scored three points at 2022 NCAAs and Christian Sztolcman was a member of the 400 and 800 free relays at 2022 NCAAs. Stock photo via Anthony Hall:Auburn Athletics

The Auburn men will have two fifth years on their roster this upcoming season with diver Conner Pruitt and swimmer Christian Sztolcman.

This past season, Pruitt was Auburn’s fifth highest scorer at SECs as he scored 42 individual points, Notably, he also was the team’s highest-scoring diver. He finished fourth on the 3 meter and 11th on the 1 meter.

He went on to compete at NCAAs where he finished 15th in the 1 meter and 16th in the 3 meter scoring a total of three points. He was one of only three members of the team to score individually at NCAAs as well as the only diver for the team at NCAAs.

Pruitt missed NCAAs as a junior, but earned All-American honors during the 2020 season in which NCAAs were canceled. He competed at 2019 NCAAs in his freshman year where he was 25th on the platform, 28th on the 3 meter, and 34th on the 1 meter.

He went on to swim at NCAAs as a member of Auburn’s 400 and 800 freestyle relays that finished 19th and 21st respectively. Notably, he swam the fastest split on the team’s 400 freestyle relay.

The Auburn men finished sixth out of ten teams at the 2022 SEC Championships. The return of Pruitt and Sztolcman is huge as the team only had 94 points scored by their senior class. The return of the two means that they only graduated 43 points.

The return of the two is also huge as the returning points for second place is a close one. Based on SwimSwam’s numbers after SECs, the Tigers now jump just ahead of Georgia for the second-most returning points.

The Auburn men were one of the NCAA teams that stood out to SwimSwam at last month’s US Nationals. Notably, Sztolcman was in attendance where he swam a season best in the 200 LCM free.

With these 5th years returning for Auburn, and Bama’s addition of distance specialist Victor Johansson, as well as nearly all the winners of other events from both teams, nearly every event could be a tight competition!👍👍