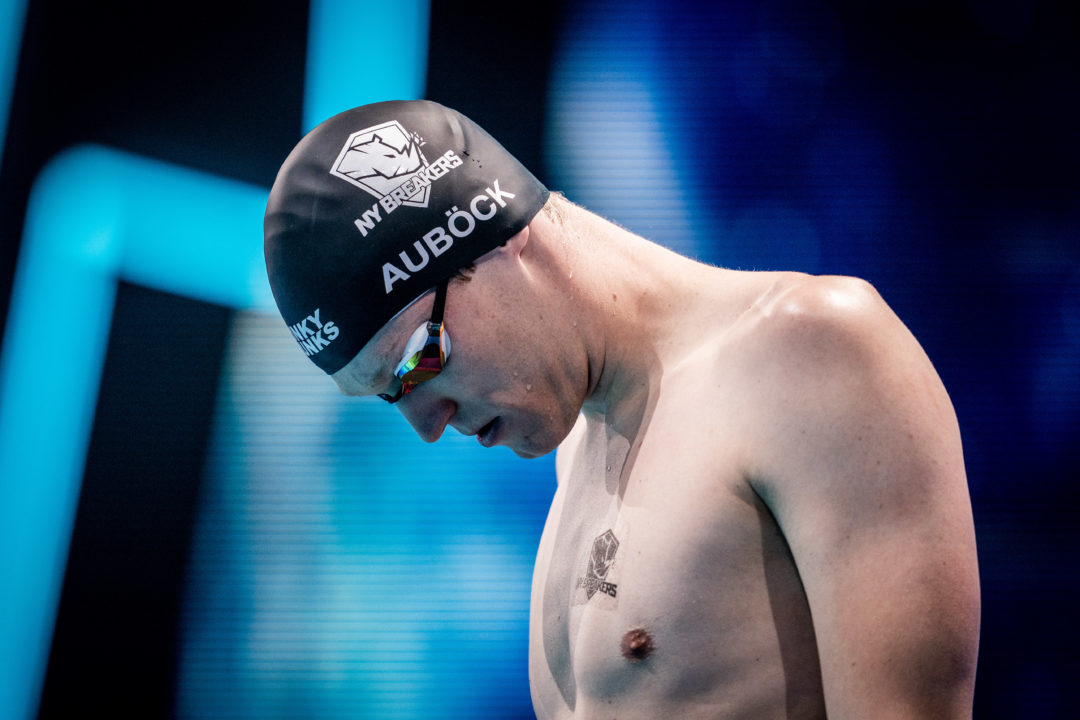 Felix Auboeck crushed the Austrian record in the 400 short course meter free today while winning a key ISL victory for the New York Breakers. Archive photo via Mine Kasapoglu / ISL

The 23-year-old Auboeck went 3:37.48 in the final individual event Monday. That took almost two and a half seconds off the old Austrian national mark of 3:39.82 set by Dominik Koll back in 2008.

Heading into this fall’s International Swimming League season, Auboeck’s career-best time was a 3:43.42 set at Short Course Worlds in 2016. Auboeck was due for a drop, though, as his long course time had improved to 3:44.1 over that span and converted to a much faster short course time, even as his short course yards time in the 500 free dropped precipitously over that same span.

In the ISL season opener last weekend, Auboeck went 3:41.39 to smash two seconds off his best. Today’s swim completed six seconds worth of time drops across two swims within a ten-day span.

Auboeck’s time is also an ISL record, breaking the 3:38.30 set by Elijah Winnington last season. He’s the fastest in the ISL this season by almost two seconds.

Auboeck should now rank as the 22nd-fastest performer of all-time in the event, based on USA Swimming’s database.

Further back in that field, seventh-place Tomas Peribonio broke the Ecuadorian record by more than a second, too. Peribonio was 3:48.97 for the Cali Condors, shattering the 2014 record of 3:50.21 from Esteban Enderica Salgado. Peribonio becomes the first Ecuadorian man under 3:50 in the event.

Peribonio got that Natty record also

Congrats Felix! Hell of a swim

Auboeck has been looking fast! Really wonder what his final ncaas would have looked like

Auboeck vs Smith would’ve been a sight to see in the 500.

Wow!! Wonder what body part he sold to swim that fast.