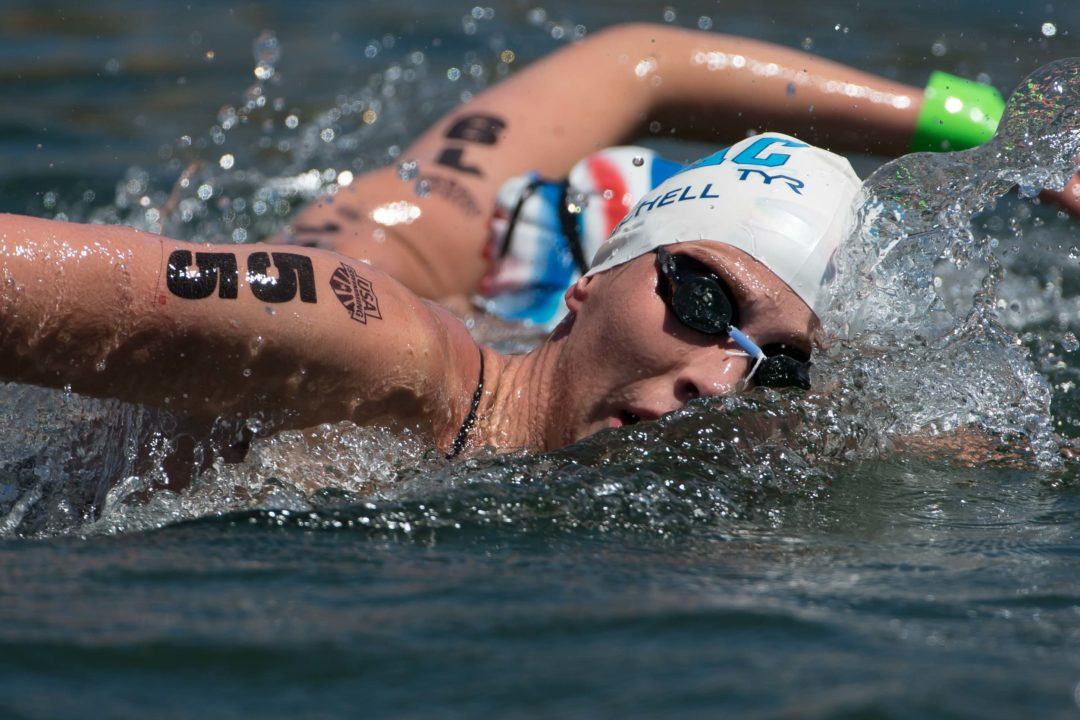 Ashley Twichell claimed the first gold of the competition for the Americans in the women's 5k open water. Archive photo via Mike Lewis/Ola Vista Photography

Ashley Twichell claimed the first gold for the Americans at the 2017 FINA World Championships in the women’s 5k Open Water, clocking a time of 59:07.0 to top the field by over three seconds. This comes a day after Jordan Wilimovsky‘s silver medal performance in the men’s 10k, their first open water medal of the competition.

After the mass pack stayed together for the first bit of the race, some separation began to occur about halfway through, as a group of 12 swimmers got away from the others. Twichell then moved into the lead with 1000m to go and never looked back. In the end there were four swimmers well ahead at the finish, with the next pack of seven over a minute clear of everyone else.

Twichell picks up her third Open Water World Championship medal, but her first in the last six years. In 2011, she won gold in the Team Event along with a bronze in the 5k. She had shown great form recently, winning silver in the 800 free at the SC World Championships and then dominating the 10k at U.S. Nationals, winning by nearly a minute. She finished 10th in that event on Sunday.

France continued their very impressive showing in Lake Balaton, winning yet another medal as 10k World Champion Aurelie Muller pulled off the silver in 59:10.5 over Brazil’s Ana Marcela Cunha (59:11.4).

Muller now has a gold and a silver, and her countryman Marc-Antoine Olivier has a gold and a bronze in the men’s 5 and 10k events, making France the only nation to medal in all four open water races thus far.

Cunha picks up her second bronze after finishing in the same position in the 10k. These performances have been remarkable given she had her spleen removed shortly after Rio and had to take some serious time off training. She also won bronze in this event four years ago in Barcelona.

2016 10k Olympic gold medalist Sharon van Rouwendaal narrowly missed a medal in 4th, registering a time of 59:11.5. This is a better showing than her performance in the 10k, where she fell off towards the end and finished 16th. That makes back-to-back 4th place finishers for her in this event.

15 seconds back for 5th was American Haley Anderson, the two-time defending World Champion. Anderson moves up one spot from her 6th place finish in the 10k. Italian Giulia Gabbrielleschi of Italy was two tenths back for 6th, and South Africa’s Michelle Weber and Australia’s Kiah Melverton tied for 7th in indentical times of 59:27.5.

The silver and bronze medalists from 2015, Kalliopi Araouzou of Greece and Finnia Wunram of Germany, placed 9th and 11th overall respectively.

Congratulations, Ash! We are so proud of you!

I saw the end of the race ( 700 meters ) and Ashley was really unstoppable until the finish . So Happy for her . Usa is now boosted to begin in great fashion on Sunday

Congrats! Big win for Ashley and for the USA