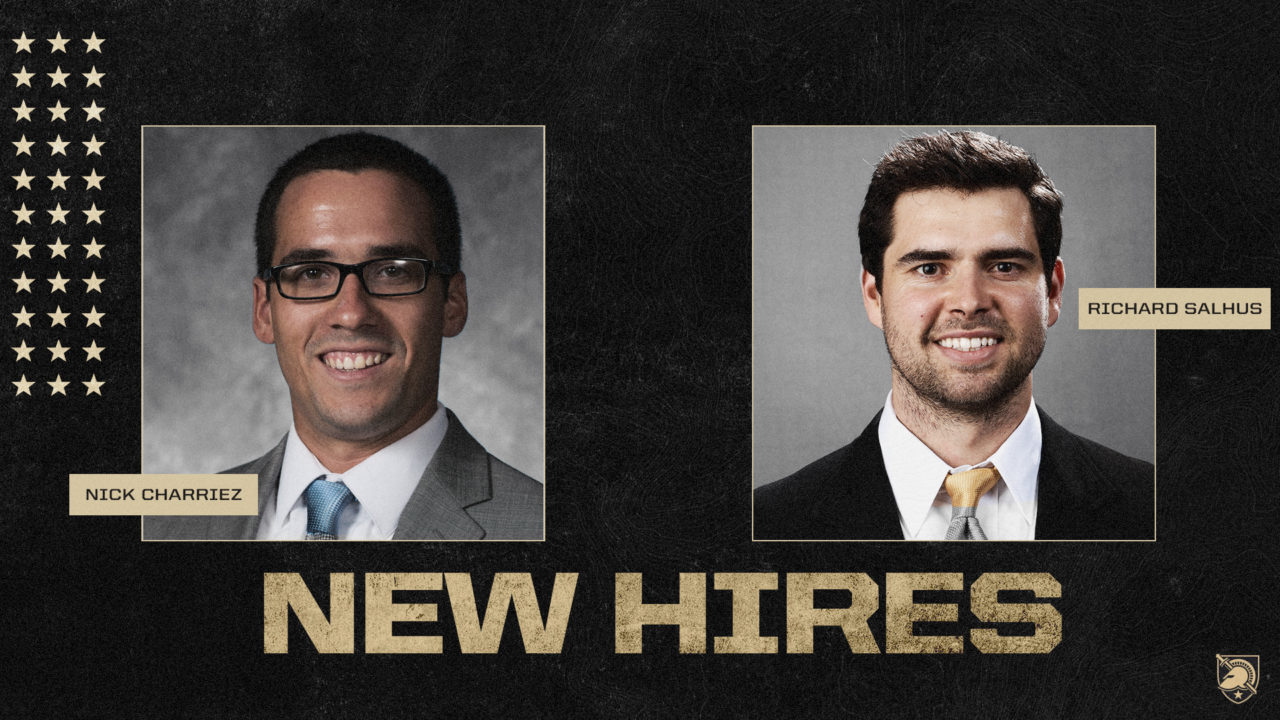 “I’m excited to welcome Rich and Nick to our West Point swim and dive family,” Nigro said. “Both coaches bring years of experience coaching, recruiting, and developing athletes to the highest levels. I want to be surrounded by people with energy, passion, and a deep understanding for the sport and who see big things for Army West Point swim & dive in the very near future. I’m excited to have found that with Rich and Nick! I’m excited to see where they will help lead this program.”

Charriez arrives on the banks of the Hudson following a three-year career as an assistant on the staff at Johns Hopkins before being elevated to Associate Head Coach and Director of Recruiting in the summer of 2018. With Charriez on the staff, the Blue Jays finished .500 or better in dual meets during all four seasons while compiling a 22-14-2 record.

“Nick is passionate, energetic and extremely outgoing,” Nigro said. “He’s a tireless recruiter and has already begun to make an impact on the recruiting fronts here at West Point. During his time at Johns Hopkins, he worked with and learned from two top-tier coaches in our sport in George Kennedy and Scott Armstrong. I’m excited to see the ideas and perspectives he brings to our staff. From the first day I met Nick, I could tell that he shared my vision for this program and is excited to bring new ideas to this program. He’s focused and extremely hardworking and will have a positive impact on all facets of our program!”

During his time at Johns Hopkins, the Blue Jay women finished in the top-10 at the NCAA Championships three times, with a pair of top-five finishes (2016, 2018). The Jays have combined for 104 All-America honors, including 55 first team selections. On the men’s side, he helped coach the team to four straight fourth-place showings at the NCAA Championships. The JHU men have garnered 142 All-America honors, including 99 first team accolades. In addition, three Blue Jays won NCAA titles.

Prior to his stint at Johns Hopkins, he spent two years as an assistant coach at Connecticut College.

In his first year with the Camels, Charriez helped the men’s team to a program-best third and 12th-place finishes, respectively, at the NESCAC and NCAA Championships. He also guided Samuel Gill to the 2014 NCAA title in the 100 Back. The women’s team meanwhile placed fifth and 16th, respectively, at conference and national championships. In all, Charriez coached 11 Connecticut College swimmers to All-America honors and the teams combined to break 28 school records in 2014. Last season, the Camels broke a combined 14 school records and eight swimmers earned All-America honors. The men’s team finished third at the NESCAC Championships and 19th at NCAAs, while the women took home sixth at the conference championship.

Charriez was a four-year member of the Kenyon Lords swim team that won the 2013 NCAA Championship and finished second in 2011 and 2012. He was a three-time NCAA qualifier and earned All-America honors twice in the 100 Fly and once in the 200 Fly. In 2013, Charriez was a team captain and received the Coaches’ Award in memory of Joseph O’Daniel, given by the coaches to a swimmer who best demonstrates the true spirit of Kenyon Swimming. Charriez graduated in 2013 with a Bachelor of Arts degree in mathematics.

Salhus joins the Black Knights’ staff following a three-year stint at the University of Iowa, where he served as an assistant coach as well as the men’s and international recruiting coordinator.

“Rich brings Power 5 coaching experience and knowledge to West Point from both the swimming and coaching perspective. At the college and club level, he has established great relationships with his athletes and has been able develop them to a higher level. His experience on the USA Junior National Team coaching staff will be invaluable to our program and our athletes. I had the opportunity to get to know Rich over the last few years from our time on the road recruiting. He is an exceptional recruiter and will get to know potential cadet-athletes athletes on a personal level to find the best fits for our program.”

Salhus, who was a former Hawkeye swimmer and Iowa graduate, returned to his alma mater prior to the 2016-17 season after spending five years as assistant head coach of the Iowa Flyers Swim Club before a brief stretch as the club’s head coach.

During the 2018-19 season, the Hawkeyes had five student-athletes — two men and three women — qualify for the NCAA Championships. The team swam to five school records and posted 64 top-10 times in program history.

Iowa’s men’s team posted a 6-2 dual meet record, while the women’s team swam to six victories. The Hawkeyes finished the season with five Big Ten weekly honors and the program had 11 top-eight finishes at the Big Ten Championships.

The Hawkeye men went 5-1 in dual competition, including posting back-to-back victories over No. 21 Minnesota and at No. 23 Purdue. The Iowa women went 6-3 and the program swam to 69 NCAA qualifying marks with 10 Hawkeyes being honored with Big Ten weekly recognition throughout the course of the season.

The Hawkeyes went a combined 13-5 in dual competition — 7-2 for the women, 6-3 for the men — with a roster comprised of underclassmen. Iowa had 56 automatic or provisional NCAA qualifying standards during the season.

Before returning to his alma mater, Salhus helped the Iowa Flyers achieve a number of accolades during his tenure. He coached a fourth-place place finisher in the 200 butterfly at the 2016 USA Olympic Swimming Trials, and an athlete named to 2016 USA Junior Pan Pacific Championship Team.

Coaching alongside Robert Pinter, Salhus was also instrumental in developing three swimmers that were selected to the National Select Camp and one athlete was chosen to the USA Swimming National Junior Team.

The Johannesburg, South Africa, native was a four-year Iowa letterwinner, competing from 2007-11.  He earned Big Ten Swimmer of the Week honors in 2008.

Salhus competed for Jon Rudd under Plymouth Leander in the United Kingdom where he held various records in Devon County.  He went on to win silver in the 17/18-year-old 50 free and bronze in the 800-free relay at the British Youth Championships and he also competed in the Great Britain Open Championships, where he was a finalist in the men’s 50 fly and semifinalist in men’s 50 free.

Salhus, who is ASCA Level 4 certified, graduated from the University of Iowa in 2011 with a bachelor’s degree in health science with a minor health and sports studies. He and his wife, Mary, have two sons, Liam and Oliver.

Nick, all the best to you.
Go Hop!

Interesting move for BONGO. Thought he’d be a lifer at Iowa, seeing as his club connections should have helped the Hawks, but they didn’t. They chose to keep Soughstad instead of Rich…? Hope Rich has learned to reign in his emotions!

So that’s 2 iowa assistants who’ve left in the last 2 months for asst positions at non-power 5 schools?