TIDE Swimming Announces Coaching Leadership for 2019-20 and Beyond 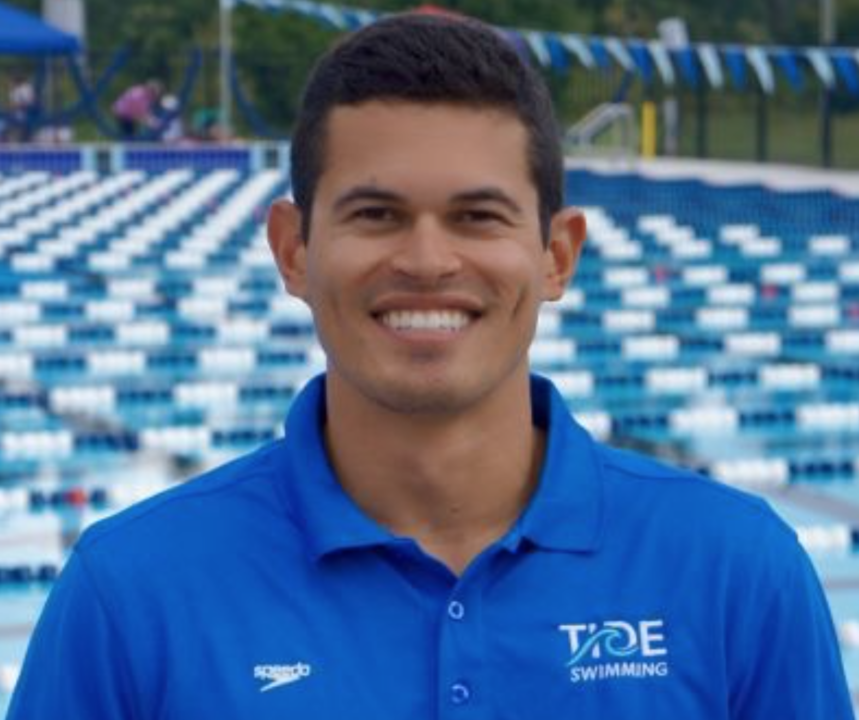 The Georgia Tech coaching staff in total have 61 CSCAA All-America awards and three Olympic gold medals from their time as athletes.

TIDE Swimming proudly announces the promotion of Associate Head Coach, Richard Hunter, to the Head Coach of TIDE Swimming, effective Sept 1, 2019. Coach Richard started with TIDE in 2016 in the Associate Head Coach role with Jack Roach serving as Head Coach. Coach Richard grew up swimming at the Mission Viejo Nadadores, competed for the University of California at Berkeley under Head Coach Dave Durden and served as co-captain his Senior year. He graduated from Berkeley in 2008 and coached at Mission Viejo under Bill Rose for seven years.

“Coach Richard has done an exceptional job these past three years by demonstrating the ability to lead all the important stakeholders at a large club,” says Katy Arris-Wilson, President of the TIDE Swimming Board of Directors. “He leads and connects with athletes and parents in a way that drives performance. He has earned the respect of his coaching colleagues and staff, and he liaises well with our partner, the YMCA of South Hampton Roads. Furthermore, he takes seriously all of the Safe Sport protocols we have in place knowing that protection of athletes and coaches is paramount. We are thrilled to have him leading our club!”

“Coach Richard brings the highest of qualities to TIDE,” says Jack Roach, Director of Coach and Athlete Development. “First and foremost, he understands the sport and leads by example. He displays commitment and has a clear passion for Swimming. He has a high regard for the people and he has the ability to pull the best out of people. Coach Richard challenges his athletes in a relentless manner but at the same time builds relationships that are founded on some-thing much deeper than outcomes. Lastly, he is diligent in his work and cares deeply for those around him.”

Jack Roach continues his involvement with and impact on the team by moving into the role of Director of Coach and Athlete Development for TIDE Swimming. In addition to his work with TIDE Swimming, Jack Roach coaches the ISL team LA Current with Dave Marsh and Brett Hawke.

“Any swimmer, coach, or person who knows Jack Roach knows how lucky our TIDE membership is to have Jack leading and influencing every aspect of our team,” says Arris-Wilson. “His experience, his integrity, his demeanor, and his passion for establishing the right culture to drive performance of people are second to none. Our young coaches are being brought up in the sport by the very best.”

Associate Head Coach Mike Salpeter continues in an expanded role that now leads one location and oversees four YMCA locations – Great Bridge, Greenbrier, Taylor Bend, and Portsmouth. Mike also continues to serve on the team’s Board of Directors, along with Jack and Coach Richard.

“We could not be happier with the passion, commitment and energy Coach Mike brings to our team and to Chesapeake,” says Arris-Wilson. “He works well with the staff and the YMCA and he is an important contributor to our strategic discussions in Board meetings. The triumvirate of Jack, Coach Richard and Coach Mike results in thoughtful and strong leadership for our club.”

“Coach Hayley started coaching with the club at the same time as myself and Jack,” says Head Coach Richard Hunter. “She proved her adaptability during her first year as she got the Chesapeake portion of the program off the ground and running. She then transitioned over to Virginia Beach and from there, Hayley has really become one of the most reliable and hard working members of our staff. In addition to her coaching duties, Coach Hayley is constantly working “behind the scenes” on areas of our team like apparel, meet entries, the Team Newsletter, our partnership with Speedo, and Open Water events in our area and through the Virginia Swimming LSC.”

Cat Ware was promoted to the Head Developmental Coach role.

“Coach Cat’s ability to work with and relate to young people truly sets her apart as a coach,” says Hunter. “The develop-mental component of a swim team is so crucial to establishing the foundations of culture, skill development, and so much more. Coach Cat brings a combination of experience (ten years coaching, seven with TIDE) and enthusiasm for teaching to her new position. I really cannot think of a better person to be the face of TIDE Swimming for our newest families and athletes.”

TIDE Swimming recorded its highest finish ever at Junior Nationals this past summer – 11th in the Combined Team category. Furthermore the team currently has the most high school Olympic Trial qualifiers in the more than 40 year history of the Hampton Roads competitive swimming geography with four: Lauren Barakey, Elle Caldow, Samantha Tadder, and Kayla Wilson.